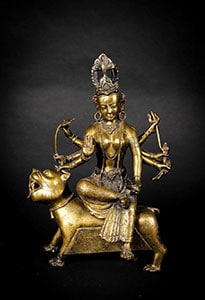 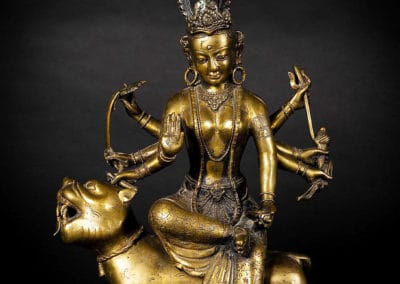 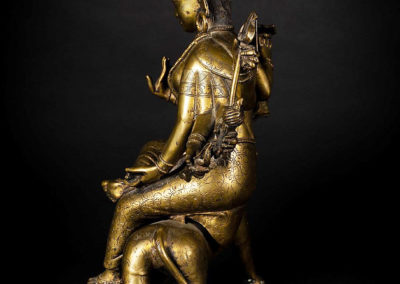 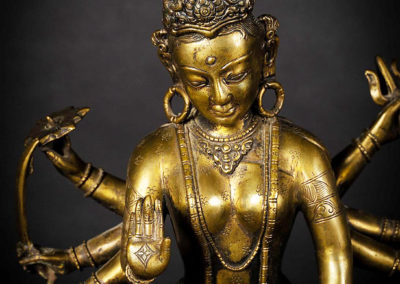 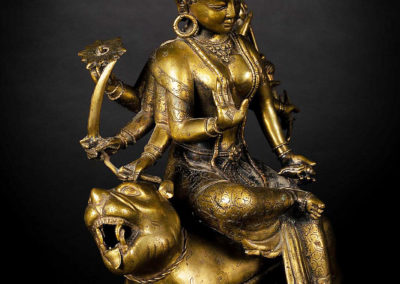 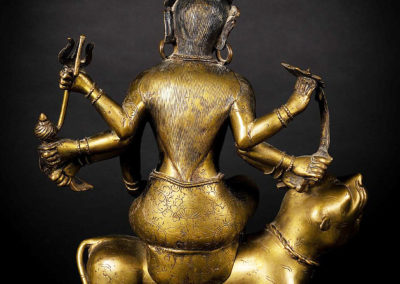 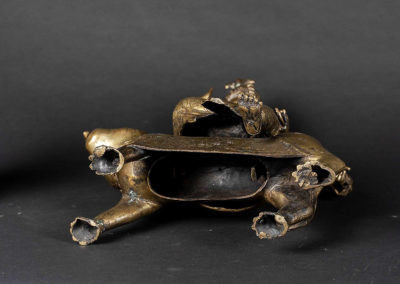 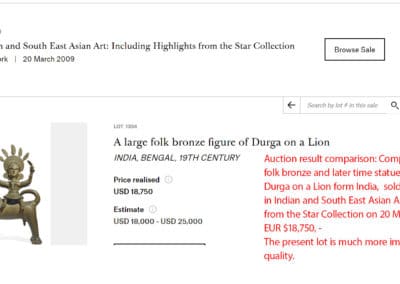 To the best of our knowledge, a similar piece was not shown / sold on the art market for the last 50 years. The bronze figure is a masterpiece and very rare regarding its style, details, pigment and period (from Nepal). This is a once in a life time opportunity to buy such exceptional work of art.

*Durga (Sanskrit: दुर्गा, IAST: Durgā), identified as Adi Parashakti, is a principal and popular form of the Hindu Goddess. She is a goddess of war, the warrior form of Parvati, whose mythology centres around combating evils and demonic forces that threaten peace, prosperity, and Dharma the power of good over evil. Durga is also a fierce form of the protective mother goddess, who unleashes her divine wrath against the wicked for the liberation of the oppressed, and entails destruction to empower creation.

Durga is depicted in the Hindu pantheon as a Goddess riding a lion or tiger, with many arms each carrying a weapon, often defeating Mahishasura (lit. buffalo demon). The three principal forms of Durga worshiped are Maha Durga, Chandika and Aparajita. Of these, Chandika has two forms called Chandi who is of the combined power and form of Saraswati, Lakshmi and Parvati and of Chamunda who is a form of Kali created by the goddess for killing demons Chanda and Munda. Maha Durga has three forms: Ugrachanda, Bhadrakali and Katyayani. Bhadrakali Durga is also worshiped in the form of her nine epithets called Navadurga.

She is a central deity in Shaktism tradition of Hinduism, where she is equated with the concept of ultimate reality called Brahman. One of the most important texts of Shaktism is Devi Mahatmya, also known as Durgā Saptashatī or Chandi patha, which celebrates Durga as the goddess, declaring her as the supreme being and the creator of the universe. Estimated to have been composed between 400 and 600 CE, this text is considered by Shakta Hindus to be as important a scripture as the Bhagavad Gita. She has a significant following all over India, Bangladesh and Nepal, particularly in its eastern states such as West Bengal, Odisha, Jharkhand, Assam and Bihar. Durga is revered after spring and autumn harvests, especially during the festival of Navratri

The Buddhist goddess Palden Lhamo shares some attributes of Durga.

According to Hajime Nakamura, over its history, some Buddhist traditions adopted Vedic and Hindu ideas and symbols. For example, the fierce Vajrayana Buddhist meditational deity Yamantaka, also known as Vajrabhairava, developed from the pre-Buddhist god of death, Yama. The Tantric traditions of Buddhism included Durga and developed the idea further. In Japanese Buddhism, she appears as Butsu-mo (sometimes called Koti-sri). In Tibet, the goddess Palden Lhamo is similar to the protective and fierce Durga

Complete the contact form below to request more information about: A Bronze Figure of Durga.