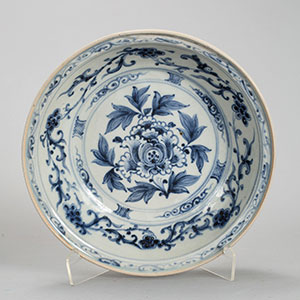 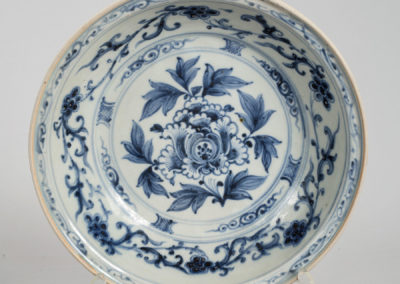 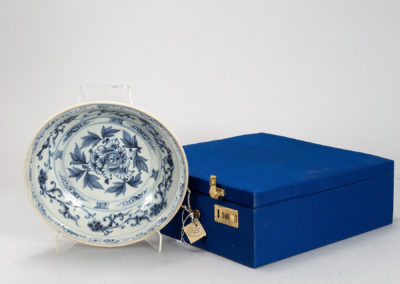 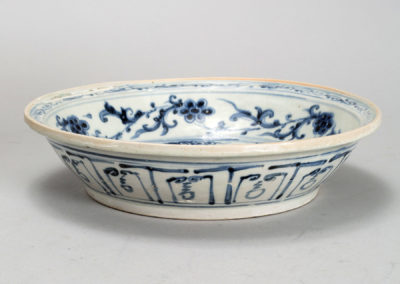 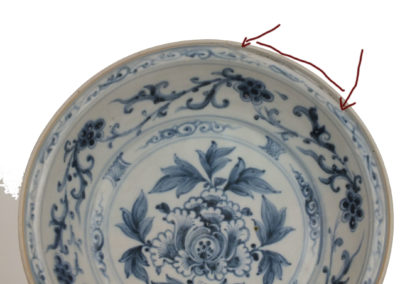 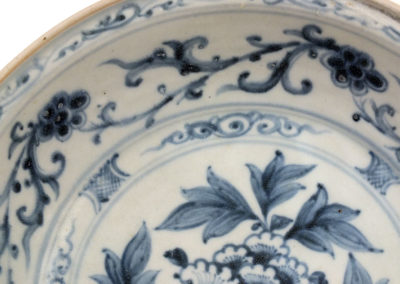 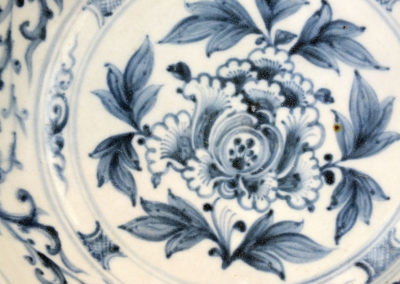 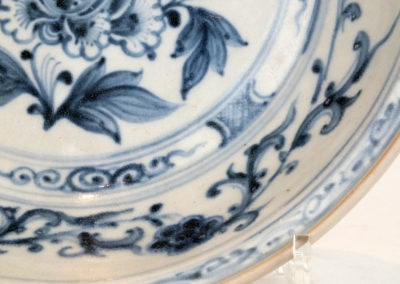 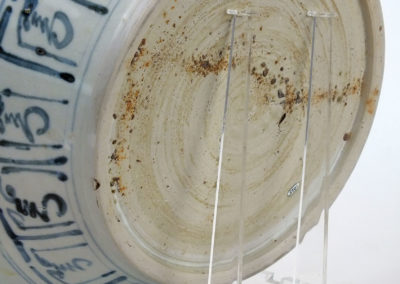 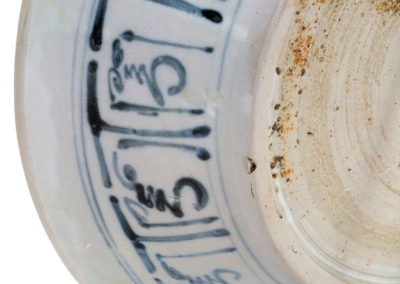 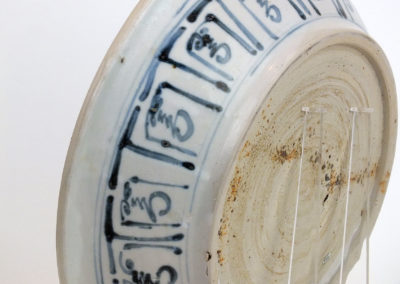 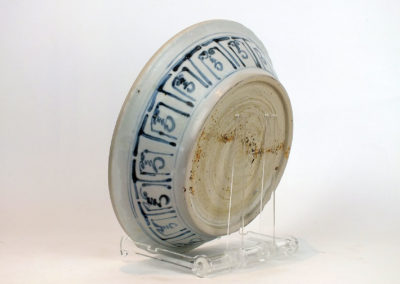 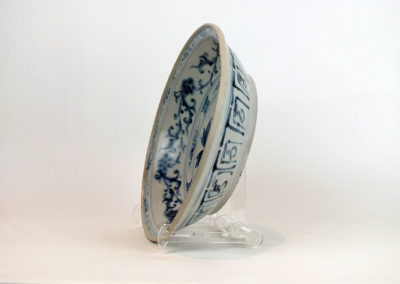 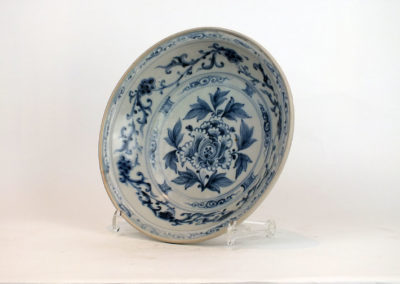 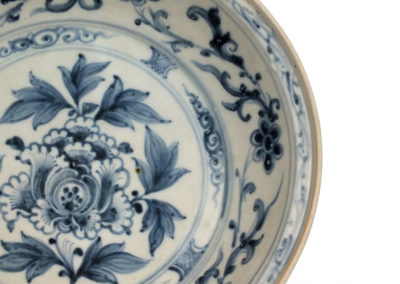 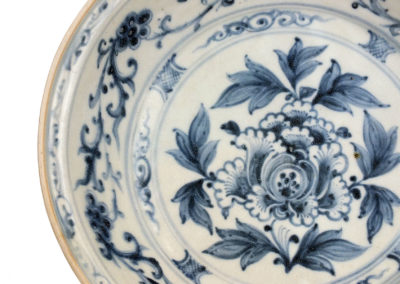 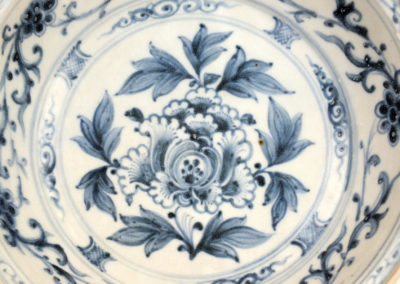 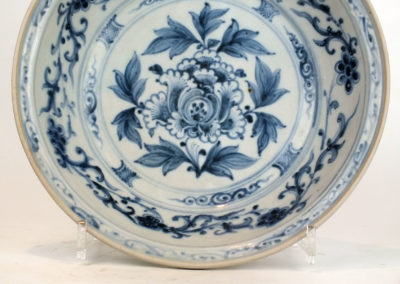 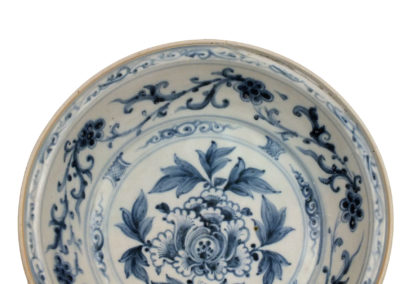 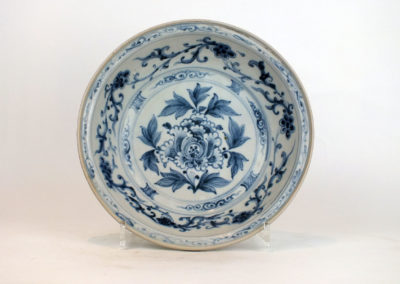 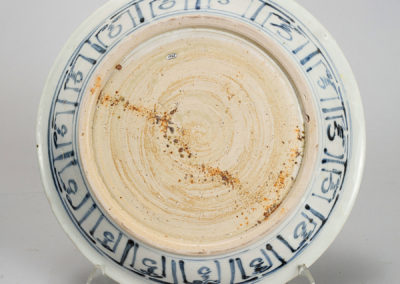 A private collection of Asian Ceramics and Carpets

Condition: Wear to glaze, No broken or repaired. Perfect condition. The condition has been checked with strong UV-light. On small line form the rim ca. 4 cm missing the paint. This is original, presumably small mistake by the maker when the dish was made. See phot 20.

*The Yuan dynasty was the empire or ruling dynasty of China established by Kublai Khan, leader of the Mongolian Borjigin clan. It followed the Song dynasty and preceded the Ming dynasty. Although the Mongols had ruled territories including modern-day North China for decades, it was not until 1271 that Kublai Khan officially proclaimed the dynasty in the traditional Chinese style,[7] and the conquest was not complete until 1279 when the Southern Song dynasty was defeated in the Battle of Yamen. His realm was, by this point, isolated from the other Mongol khanates and controlled most of modern-day China and its surrounding areas, including modern Mongolia.[8] It was the first non-Han Chinese dynasty to rule all of China and lasted until 1368 when the Ming dynasty defeated the Yuan forces. Following that, the rebuked Genghisid rulers retreated to their Mongolian homeland and continued to rule as the Northern Yuan dynasty. Some of the Mongolian Emperors of the Yuan mastered the Chinese language, while others only used their native language (i.e. Mongolian) and the ‘Phags-pa script.

The Yuan dynasty was the khanate ruled by the successors of Möngke Khan after the division of the Mongol Empire. In official Chinese histories, the Yuan dynasty bore the Mandate of Heaven. The dynasty was established by Kublai Khan, yet he placed his grandfather Genghis Khan on the imperial records as the official founder of the dynasty as Taizu.[note 3] In the Proclamation of the Dynastic Name,[2] Kublai announced the name of the new dynasty as Great Yuan and claimed the succession of former Chinese dynasties from the Three Sovereigns and Five Emperors to the Tang dynasty.

In addition to Emperor of China, Kublai Khan also claimed the title of Great Khan, supreme over the other successor khanates: the Chagatai, the Golden Horde, and the Ilkhanate. As such, the Yuan was also sometimes referred to as the Empire of the Great Khan. However, while the claim of supremacy by the Yuan emperors was at times recognized by the western khans, their subservience was nominal and each continued its own separate development. 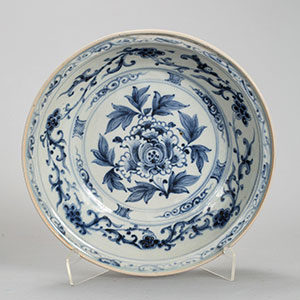