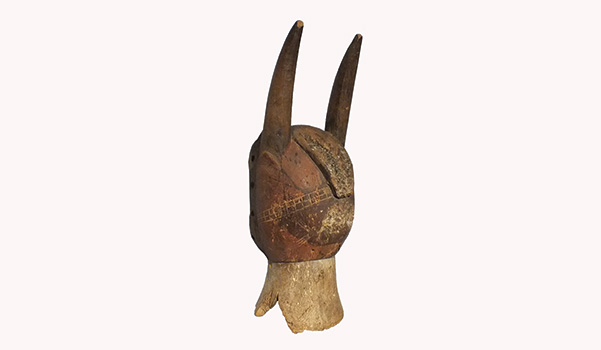 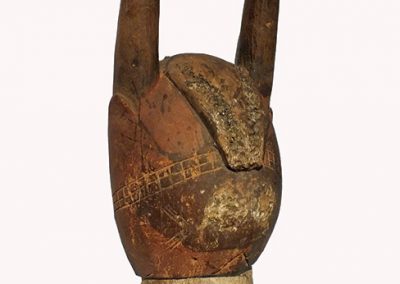 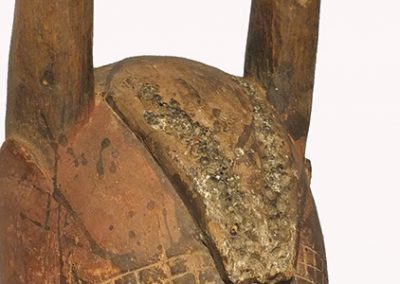 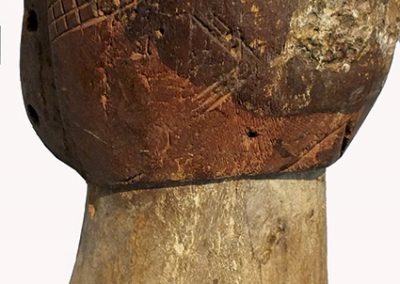 Acquired from above by the present owner

Fine Chamba Mask, of overall curvilinear form with antlers arching up high and forward above the domed head, the mouth extending along the same curved line; fine, heavily encrusted dark-brown patina showing significant age and use, with original red and white pigment.

The Chamba people of Nigeria and Cameroon speak two distantly related languages: Chamba Leko, of the Leko–Nimbari languages, and Chamba Daka, of the Dakoid languages.

The Chamba people have their own particular religious beliefs known as the Chamba religion.[1] The Chamba (they refer to themselves as SAMA) people are an ethnic group found in the present-day borderline between the Cameroon and Nigeria. Researchers Raymond Boyd and Richard Fardon agree that the chamba people are composed of two different languages belonging to the Niger-Congo family.[2] The two groups are called Chamba Daka and Chamba Leko.

The Chamba speakers still speak various other dialects that are different from place to place. The central area is where the Chamba Daka (Sama Nnakenyare) live. That area is found in North east of Nigeria on the Cameroon border in Adamawa State. The area was called the “Chamba Native Authority” during the colonial era. Actually the Chamba were split into Nigeria and Cameroun as a result later by the United Nation’s plebiscite conducted first in 1969 and finally in 1961.

The original occupant of the Chambaland were the Germans, but when Germany lost the First World War her territory in Africa was taken as mandated territory by the League of Nations and was given out. The Cameroun was divided between British and France. “Where the majority of the Chamba live, straddles the present border between Nigeria and Cameroon” (Boyd; 1994). Boyd also says that the “Chamba Leko speakers are restricted to the easternmost part of the central area, for the most part on the Cameroon part of the modern border. The remainder of the Chamba are Daka-speaking”.

Today the Chamba people are one of the largest ethnic groups in the North eastern Nigeria. The Gangwari of Ganye (Chief of Ganye) is highest traditional ruler in Chamba land.

The closest chamba neighbours are the Mumuye, the Fulani and the Jukun and Kutep people.