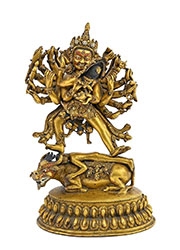 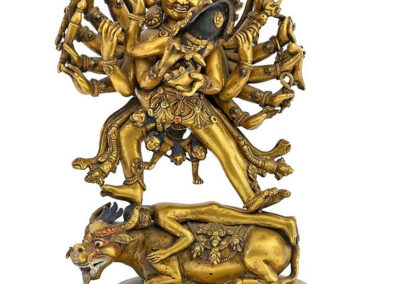 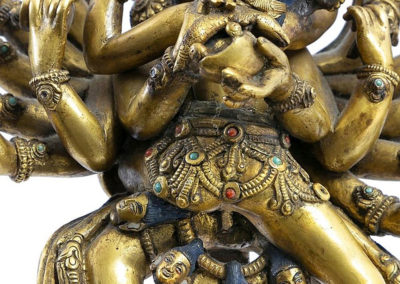 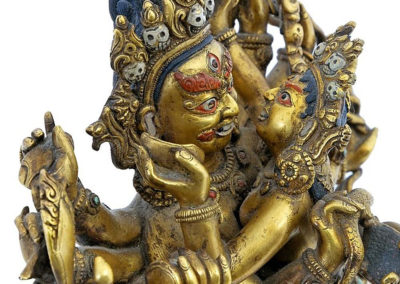 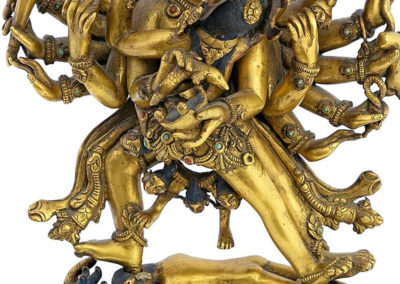 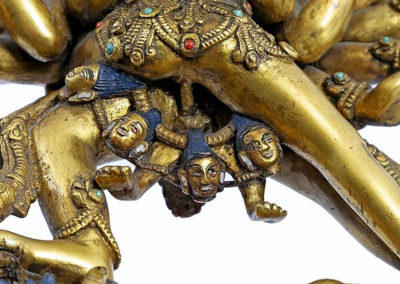 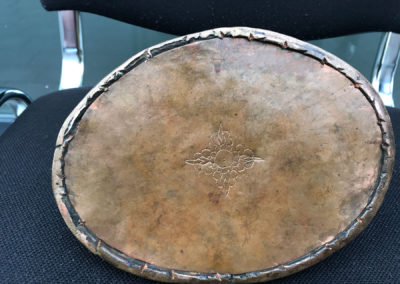 Shri Hevajra with eight faces, sixteen hands and four legs. Each face has three eyes and four bared fangs; yellow hair flowing upwards; the top of the head is marked with a vishvavajra. The sixteen hands hold sixteen skull cups. Each head has a crown of five dry human skulls; and a necklace of fifty fresh heads; six bone ornaments; the two right legs are extended, on the thighs the toes of the two folded left legs are pressing in the half vajra posture in a dancing manner; possessing the nine sentiments of dancing: grace, strength and ugliness; laughter, ferocity and frightful; compassion, fury and peace. In the lap is the mother Vajra Nairatmya, with one face, two hands, three eyes; hair flowing upwards; right a curved knife, left holding a skull cup and embracing the father; five dry human skulls as a crown; a necklace of fifty dry skulls; five bone ornaments; left leg extended and the right drawn up embracing the father. Both are standing in the middle of a blazing fire of pristine awareness. Figures trample upon bodies strewn about the double lotus pedestal. Bronze is in beautiful condition with minimal marring of the surface.

Sometime in the early 11th century, Drogmi Lotsawa Shākya Yeshe (‘brog mi lo ts’a ba sh’akya ye shes) (993-1077 AD) journeyed from Drompa-gyang in Lhatsé to Nepal and India, including Vikramashila, where he received instruction in the Hevajratantra from Śānti-pa (Ratnākaraśānti) and later to Bengal, where he encountered Prajñedraruci (Vīravajra) who instructed him in the “rootless Margapala” (Tib. Lamdré) that is particularly concerned with the Hevajra tantra and its commentaries. Drakpa Gyeltsen writes in his Chronicle of the Indic Masters:

Now Lachen [Drokmi] first went to Nepal and entered into the door of mantra through [the teacher] Bhāro Ham-thung. Then he went to India itself and, realizing that the Āchārya Ratnākaraśānti was both greatly renowned and learned, he heard extensively the Vinaya, Prajñapāramitā, and mantra. Then having gone to the eastern part of India, he encountered Bhikṣu Vīravajra, who was the greatest direct disciple of Durjayachandra, who himself had held the lineage of Āchārya Virūpa’s own disciple, Ḍombiheruka. From Bhikṣu Vīravajra he heard extensively the mantra material of the three tantras of Hevajra, complete in all their branches. He also requested the many instruction manuals of Acintyakrama and so forth, so that he heard the “Lamdré without the fundamental text” (rtsa med lam ‘bras) as well. In this way, Drokmi lived in India for twelve years and became a great translator.

After twelve years he returned to central Tibet, probably by 1030, translated the Hevajratantra into Tibetan, and taught, among others, Dkon mchog ryal po (1034-1102 AD), the founder of the Sa-skya Monastery in 1073 AD.[9] This was the beginning of the close relationship between the Sakya Order and the Hevajratantra.

In the Blue Annals, Gos lotsawa suggests that both the Hevajra as well as the Kalachakra Tantras are commentaries on, or introductions to, the Guhyasamāja.

The Chinese version of the Hevajra Tantra (Taishō XVIII 892, p. 587-601) was translated by Fa-hu (Dharmapalā) at the Institute for Canonical Translations (Yi jing yuan) in the capital of the Northern Sung (960-1128 AD), Bian liang, present day Kaifeng in Henan province. The five-volume translation was presented to the Emperor Jen-tsung at the end of Zhi he 1 (11 February 1054- 30 January 1055 AD) .[12] However, the Hevajra Tantra did not become popular in China. The title of the Chinese version reads “The Scriptural Text of the Ritual of The Great King of the Teaching The Adamantine One with Great Compassion and Knowledge of the Void explained by the Buddha.” The preface reads:

From among the 32 sections of the general tantra of Mahāmāyā one has taken 2 rituals with Nairātmyā. Dharmapāla, Great Master who transmits Sanskrit (texts), thoroughly illuminated and enlightened with Compassion, Probationary Senior Lord of Imperial Banquets, Grandee of Imperial Banquets with the Honour of Silver and Blue, Tripiţaka from India in the West during the Sung, received the honour of translating it by Imperial Mandate.