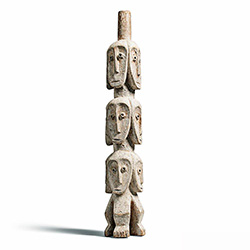 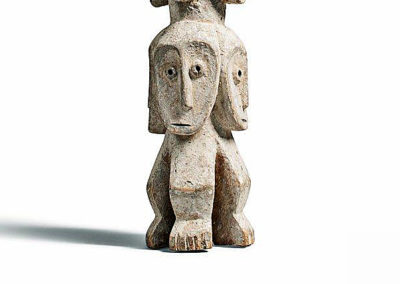 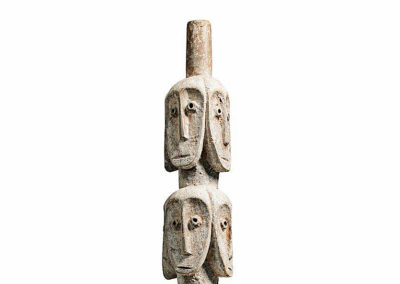 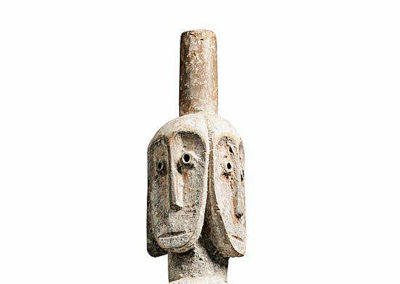 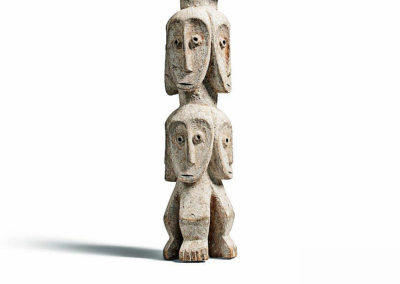 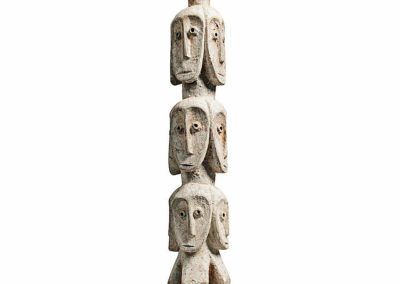 Rare Lega Several Heads Figure. This fetish figure was used during initiation ceremonies related to the Bwami secret society. It represents the elephant hunter who calls for help on seeing an elephant.

The Lega people traditionally live in small village groups, with no central authority. Within a community, a chief inherits his position on a patrilineal basis, and his close relatives have highest rank.[1] Counterbalancing this hereditary structure, the Bwami society also regulates social and political life. This society has seven levels for men and four for women and is open to all. An initiate advances through the ranks through a complex system of instruction, payment and initiation, achieving increasing status. A member of the highest level is recognized as a Kindi, a social leader with great moral authority.

The Lega people are polytheistic. Their gods include Kalaga, the promiser; Kenkunga, the reassembler; Ombe, the hidden; Kaginga, the incarnation of evil. Kaginga assists sorcerers, but Bwami membership can protect an individual against the evil doings of witches.

The Lega people originated in what is today Uganda, and started to migrate from there to their present location in the 16th century. They were fierce warriors, conquering the people whose territory they entered and imposing many of their customs.[1] By the mid-1800s the Lega were surrounded by Arab / Swahili slave posts. Although none of these posts was within the Lega territory, they were constantly threatened by slave raids. For most of the period of the Congo Free State, the Lega territory was within the area that Tippu Tip and his successors had reserved. For a period two Arab agents of the Free State, Munie Chabodu and Munie Mtoro, ruled the Lega and collected tribute in the form of rubber and ivory. They established towns at Micici on the Elila, Shabunda on the Ulindi and Mulungu in the mountains.

During the 1890s the Belgians fought a series of campaigns in which they drove away the Arab slavers, and established government posts near Micici and Shabunda. They did not fully occupy the territory until the 1900s. They organized the Lega into chiefdoms, sectors and territories, changes that were neither resisted nor welcomed by the Lega. Catholic missionaries arrived in the 1910s and the first Protestant mission was founded in 1922 in Shabunda.[8] Mining began in eastern Legaland in 1923, with further mines opened in the 1930s, employing many young Lega. Often they took a job only for a short period to earn enough money for some purpose such as Bwami initiation or marriage.

In 1933 the Belgian authorities banned Bwami, and they prohibited the society again in 1948. The Bwami continued underground and was officially recognized again in 1958, but by then much of the tradition of art production had been lost. Zaire became independent in 1960. The regime of Mobutu Sese Seko was harsh and corrupt, and Mobutu was eventually ousted in the First Congo War (1996-1997). This was soon followed by the Second Congo War (1998-2003) in which rebels attempted to throw out his successor, Laurent-Désiré Kabila. The Lega territory was the scene of many violent conflicts during this period.