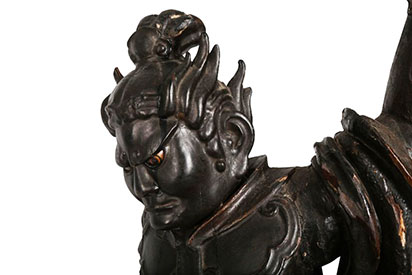 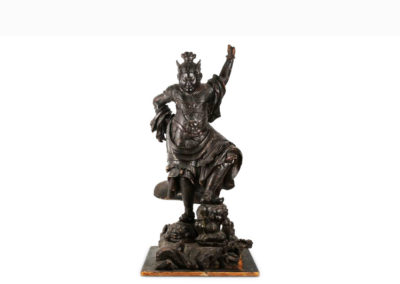 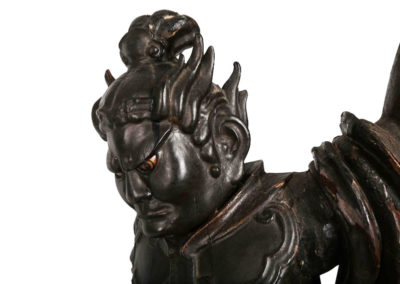 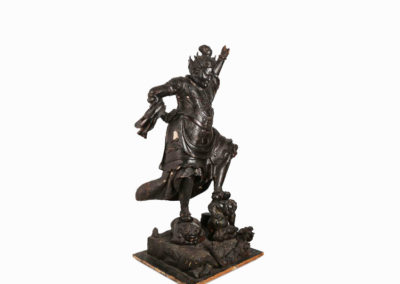 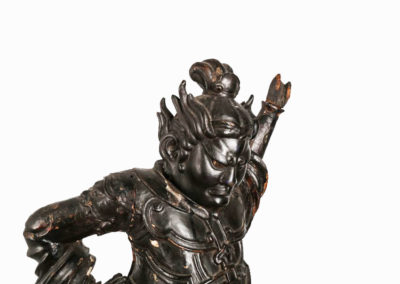 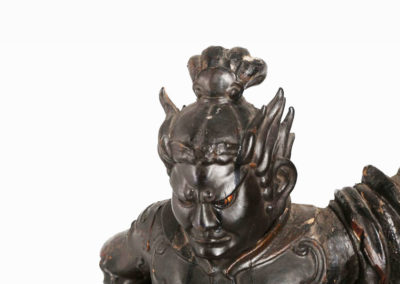 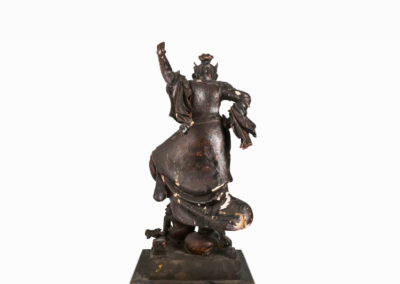 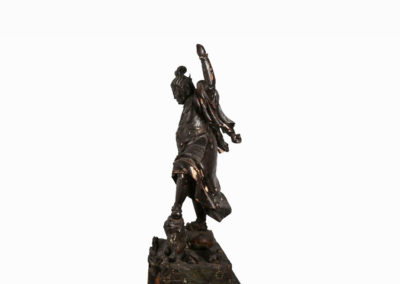 Superb Japanese Guardian Deity Zochoten. Of yosegi-zukuri construction, the figure of Zochoten, one of the Four Heavenly Kings,  standing on two subdued demons, the right hand at the hip and the other raised above his head, the eyes are inlaid in crystals, the inscription on the base, Izumi kita otori-gun Uwagamidani Hachimine zan,

King of the South, Lord of Spiritual Growth

ZŌCHŌTEN 増長天 literally means “lord who expands, lord who enlarges.” This is sometimes translated as Sprouting Growth, to indicate Zōchōten’s role as a catalyst of spiritual growth. Zōchōten is one of the four Shintennō, a group of fierce-looking (忿怒相 funnusō) guardian deities who protect the four cardinal directions. In artwork, the four typically surround the central deity on Buddhist altars. Zōchōten protects the southern quarter. Like the other members of the Shintennō group, Zōchōten is dressed in armor (yoroi 鎧) and standing atop a demon (jaki 邪鬼). Zōchōten is often depicted holding a halberd in the right hand, with the left hand clenched on the hip. However, the deity’s attributes are not rigidly prescribed. The oldest statue of Zōchōten in Japan (see photo below), dated to the middle 7th century, is located at Hōryūji Temple 法隆寺 in Nara. Zōchōten is the Buddhist equivalent to the Red Bird of Chinese mythology. The color associated with Zōchōten in Japan is commonly red, while in mainland Asia it is blue — these colors are not rigidly prescribed. One resource says Zōchōten’s helmet is sometimes depicted as though made from the skin of an elephant’s head (note: I’ve not yet found any example of this in Japan). 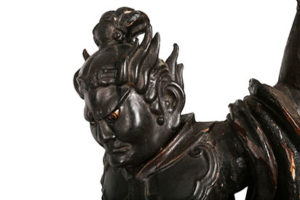