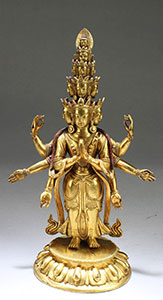 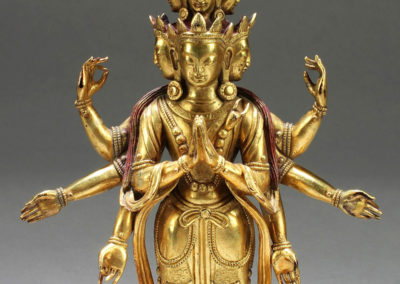 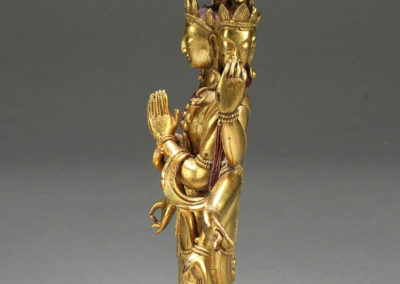 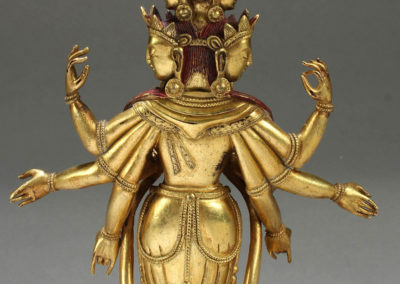 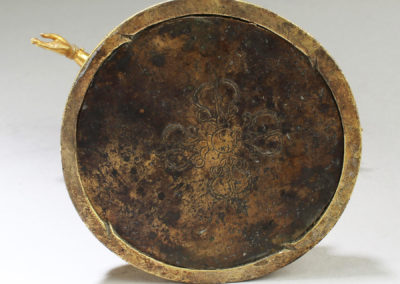 Superb Gild Bronze Avalokitesvara, standing in samabhanga on a separate cast lotus base, both principle hands in anjalimudra while the other six radiate around his body of which two are holding the prescribed attributes, wearing dhoti, antelope-upavita, long scarf draped over his shoulders, encircling the arms, falling downwards along his body with its finials curling up, bejeweled, his eleven heads consisting of nine peaceful and one ferocious face, the latter topped with the head of Amitabha and decorated with three-leaf tiaras, sealed.

The earliest translation of the name into Chinese by authors such as Xuanzang was as Guānzìzài (Chinese: 觀自在), not the form used in East Asian Buddhism today, Guanyin (Chinese: 觀音). It was initially thought that this was due to a lack of fluency, as Guanzizai indicates the original Sanskrit form was Avalokitasvara, “who looks down upon sound” (i.e., the cries of sentient beings who need help).[4] It is now understood that was the original form, and is also the origin of Guanyin “Perceiving sound, cries”. This translation was favored by the tendency of some Chinese translators, notably Kumārajīva, to use the variant 觀世音 Guānshìyīn “who perceives the world’s lamentations”—wherein lok was read as simultaneously meaning both “to look” and “world” (Sanskrit loka; Chinese: 世; pinyin: shì). The original form Avalokitasvara appears in Sanskrit fragments of the fifth century.

This earlier Sanskrit name was supplanted by the form containing the ending -īśvara “lord”; but Avalokiteśvara does not occur in Sanskrit before the seventh century. 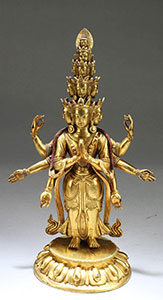