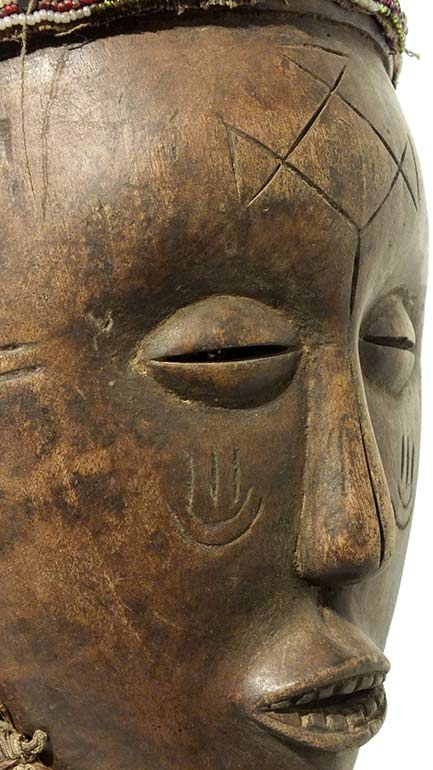 Chokwe Mwana Pwo Mask. Carved wood mask representing Mwana Pwo, an archetypal female ancestor described as a wise elder woman who symbolizes fertility and the prominent role of women in a matrilineal society.  Performed during initiation ceremonies for young men, men wear such masks along with tightly fitting bodysuits of knotted fibers and attached breasts made of wood. Some Mwana Pwo masks show may be inspired by a particular woman like this one with its elegantly abstracted features; note the crescent shaped eyes, high forehead, balanced arching brows that resolve to a narrow pointed nose, and open mouth revealing meticulously filed teeth, others put forth a more idealized representation. This example has a particularly elaborate carved corn row coiffure, adorned further with a headdress comprised of plaited vegetal fibers and numerous actual corn cobs.  The copper hooped earrings, scarification on the cheeks and temples as well as the cross on the forehead adds to its beauty. The scarification marks, which may duplicate those of the actual woman whose beauty inspired the carver, include the cingelyengelye design on the forehead. This cruciform design was probably derived from tin pendants traded into the Chokwe region by Portuguese voyagers as early as the seventeenth century. A magnificent example with Classic Angolan Mbagani tribal influence.