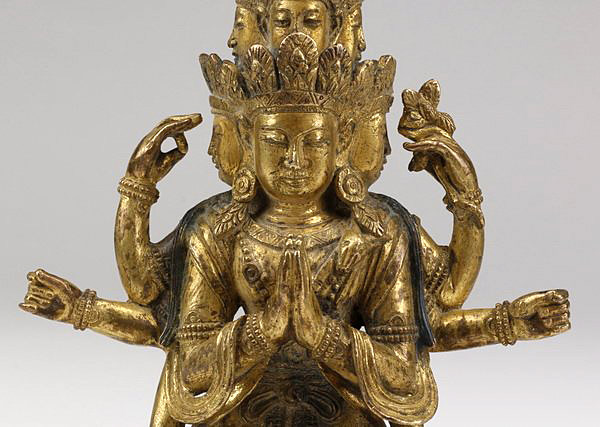 Exceptional Gild Bronze Figure Avalokitesvara, standing in samabhanga on a separate cast lotus base, both principle hands in anjalimudra while the other six radiate around his body of which two are holding the prescribed attributes, wearing dhoti, antelope-upavita, long scarf draped over his shoulders, encircling the arms, falling downwards along his body with its finials curling up, bejewelled, his eleven heads consisting of nine peaceful and one ferocious face, the latter topped with the head of Amitabha and decorated with three-leaf tiaras, unsealed.

* Avalokiteśvara (Sanskrit: lit. “Lord who looks down”) is a bodhisattva who embodies the compassion of all Buddhas. This bodhisattva is variably depicted and portrayed in different cultures as either female or male.

Avalokiteśvara is one of the more widely revered bodhisattvas in mainstream Mahayana Buddhism, as well as unofficially in Theravada Buddhism.

One prominent Buddhist story tells of Avalokiteśvara vowing never to rest until he had freed all sentient beings from samsara. Despite strenuous effort, he realizes that still many unhappy beings were yet to be saved. After struggling to comprehend the needs of so many, his head splits into eleven pieces. Amitabha Buddha, seeing his plight, gives him eleven heads with which to hear the cries of the suffering. Upon hearing these cries and comprehending them, Avalokiteśvara attempts to reach out to all those who needed aid, but found that his two arms shattered into pieces. Once more, Amitabha Buddha comes to his aid and invests him with a thousand arms with which to aid the suffering multitudes.[27]

The Bao’en Temple located in north-western Sichuan province, China has an outstanding wooden image of the thousand armed Avalokiteśvara, an example of Ming Dynasty decorative sculpture.[28][29]