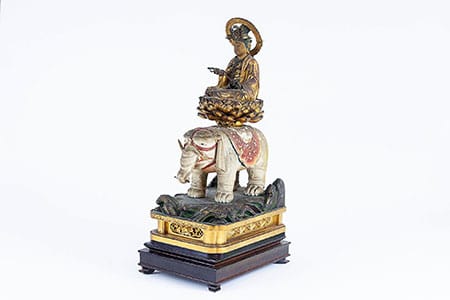 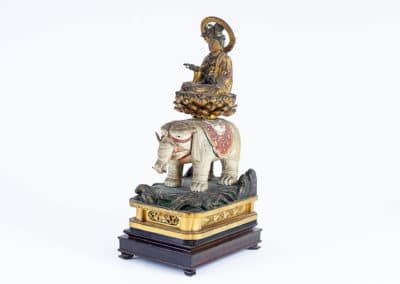 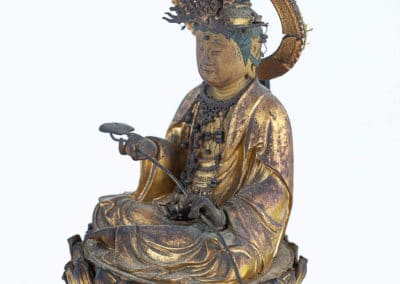 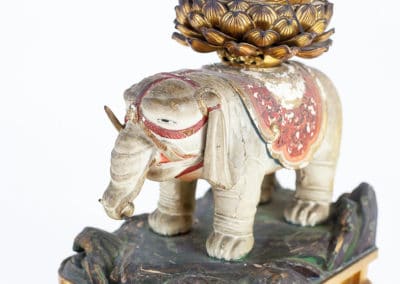 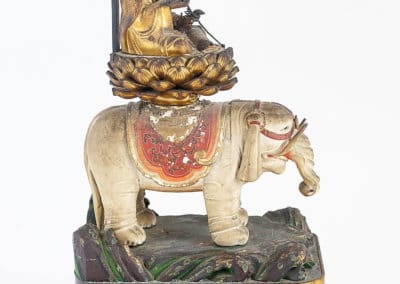 Figure of Bodhisattva Fugen. With finely carved and gilt Buddha atop carved and painted elephant, all above a rock form wood stand

Height: 37 cm. From Japan Edo period, first half of the 19th century AD

The bodhisattvas Fugen (Sanskrit: Samantabhadra) and Monju (Manjushri) were brother princes. They were born during the lifetime of the historical Buddha, Shaka (Shakyamuni) in the fourth or fifth century BC, usually appearing each side of him in temple triads. Fugen is often represented riding on an elephant.

The figure is made of lacquered, gilt and painted wood. The inscription on the back translates: ‘The grand sculptor Kōyū, the lay priest Sakkyō, by Imperial Decree given the title Hōin [Seal of the Law]’. Kōyū was one of the leading artists and restorers of his day, following the tradition of the twelfth-century master Unkei.

Fugen is known as the “Great Conduct” Bodhisattva, for Fugen teaches that action and conduct (behavior) are equally important as thought and meditation. Fugen encourages people to diligently practice the Buddhist precepts of charity, moral conduct, patience, and devotion. Fugen made ten vows for practicing Buddhism, and is the protector of all those who teach the Dharma (Buddhist Law).

Fugen is often depicted on an elephant (traditionally a white elephant with six tusks). The six tusks represent overcoming attachment to the six senses, while the elephant symbolizes the power of Buddhism to overcome all obstacles. In artwork of Mahayana traditions, Fugen is often shown holding the wish-fulfilling jewel or a lotus bud, but in artwork of the esoteric sects, Fugen is commonly seated on a lotus petal rather than atop an elephant.

The lotus is a symbol of purity, and in Buddhist art, Shaka Buddha (the Historical Buddha) and other Buddhist deities are often pictured sitting or standing on a lotus or holding a lotus. Although a beautiful flower, the lotus grows out of the mud at the bottom of a pond. Buddhist deities are enlightened beings who “grew” out of the “mud” of the material world. Like the lotus, they are beautiful and pure even though they grew up in the material world. Fugen, moreover, is the patron of devotees of the Lotus Sutra, and the lotus is thus fittingly one of Fugen’s main symbols. 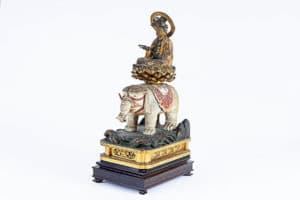 Complete the contact form below to request more information about: Figure of Bodhisattva Fugen