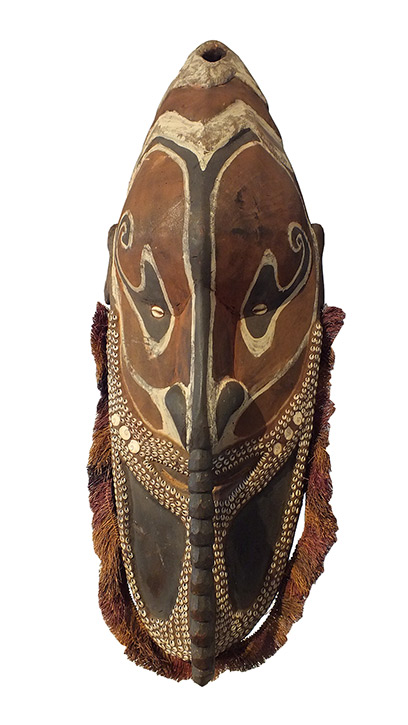 Identification. The Iatmul live along the banks of the Middle Sepik River in the East Sepik Province of Papua New Guinea.

Location. The Middle Sepik area is dominated by the meandering river that regularly floods the whole valley and continuously changes its course as it flows from west to east into the Bismarck Sea. During the wet season, extremely heavy rains raise the water level 4-6 meters, turning the whole region into a lake that extends far into the northern grasslands (turning them into swamp) and to the Sepik Hills in the south. Floating grass islands, sometimes with whole trees and birds on them, are typical for that season as the rising floodwater’s tear off parts of riverbanks and carry them downstream until they get stuck somewhere else. Iatmul territory begins about 230 kilometers up from the mouth of the Sepik and ends about 170 kilometers farther upstream. The Iatmul lead an almost amphibian way of life within the two main seasons, wet and dry, each lasting for five months with two intermediate months in between.

Religious Beliefs. The men’s house is a condensation of Iatmul religion, and it also reveals the connections between clans and their founding ancestors. In former days the house posts were beautifully carved, depicting parts of clan mythology and constituting thereby the foundation not only of the house but, symbolically, of the whole society. The building on the rectangular dancing ground represented the first grass Island floating down the Sepik River as it is described in a myth of world creation. At the same time it represented the first crocodile, the primeval ancestor who emerged from the bottom of the flood. Today, the ground level of the men’s house is used in everyday life by initiated men. It contains slit gongs, fireplaces, and sitting platforms as well as ritual objects of minor importance. The upper floor is used mainly for rituals, and the long flutes and other sacred paraphernalia are kept there. Iatmul culture is rich in myths that constitute the ideational background explaining how everything came into being. Myths in Iatmul culture are known by many people but only a few know the names of the actors and of the places. Names range among the highly valued secrets of clans. Myths can become reactivated through rituals, whereby the primeval time becomes the present and the dancing ground and the men’s house become the original stage.

Religious Practitioners. The Iatmul acknowledged men and women who gained personal status through their knowledge and use of supernatural powers for healing and as intermediaries with the supernatural world.

Ceremonies. The men’s house was the focus of different types of rituals: initiation, celebration of successful headhunting raids, performances by masked figures, and celebrations of death ceremonies for important persons. In initiations boys were scarified, receiving the distinctive marks of a crocodile, the symbol of a ritually mature man.

Arts. Iatmul art is well known for its superb carvings, which were usually painted in a curvilinear style. Almost all art objects were used in ritual contexts and only through such use did they receive meaning. Also famous are the skulls overmodeled with clay and then painted. Apart from such preservable artifacts, Iatmul art consists of ephemeral art, such as body painting and decorations made of leaves, flowers, and feathers.