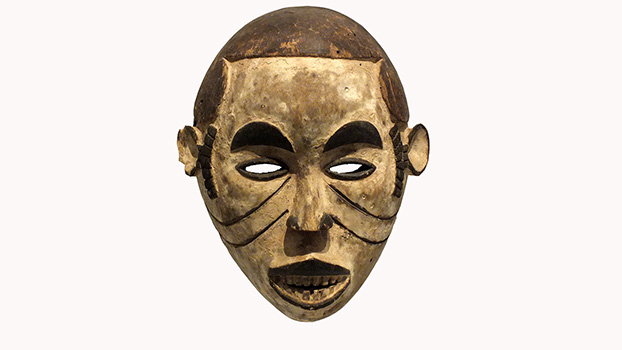 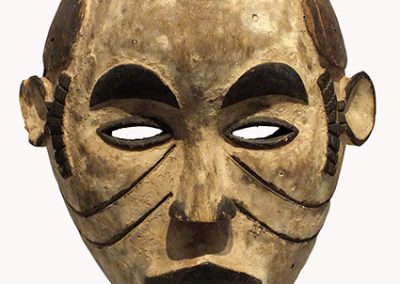 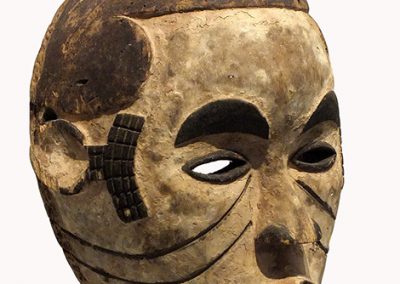 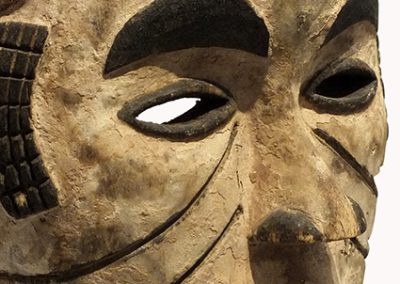 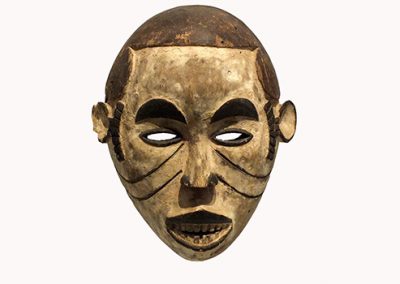 Ibo Mwo Mask Nigeria, of deeply hollowed form. And pierced around the edge for attachment. The coiffure consisting of black pigment. The face covered with white kaolin. And with pronounced pointed nose leading to curved eyebrows juxtaposed with crescent designs on the cheeks. Raised scarification’s on the temples.

* The Igbo people, also erroneously known as the “Ibo people” (because certain Europeans had difficulty making the /ɡ͡b/ sound),[3]are an indigenous linguistic and cultural people of southern Nigeria. Geographically, the Igbo homeland is divided into two unequal sections by the Niger River– an eastern (which is the larger of the two) and a western section. ] Culturally and linguistically, the Niger River has provided an easy means of communication and unity amongst the Igbo natives on both sides, as well as promoted ancient trade and movement of peoples between Igbo land and the rest of the world.[4]

Known as Ndi Igbo in the Igbo language and sometimes identified by their respective Igboid dialects or sub groupings, such theAnioma and the Ngwa, the culture of the Igbos has been shaped primarily by Igbo land’s rainforest climate, its historic trades, ancient migration folklores and social ties with its neighbours as well as far-flung trading and political allies and lately with the Europeans through colonization and the entire Western World through globalization.[4] They speak Igbo, which includes various Igboid languages and dialects. The Igbo homeland is almost surrounded on all sides by other ethnic peoples of southern and central Nigeria namely, the Ijaw, Edo, Isoko, Ogoni, Igala, Tiv, Yako, Idoma and Ibibio. 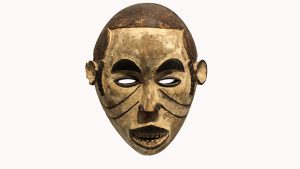