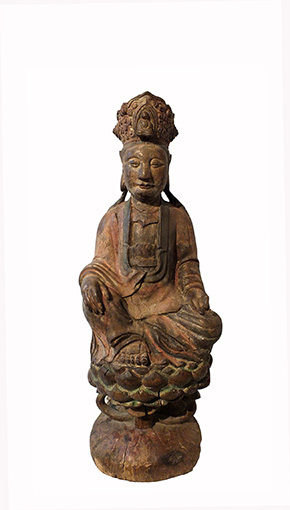 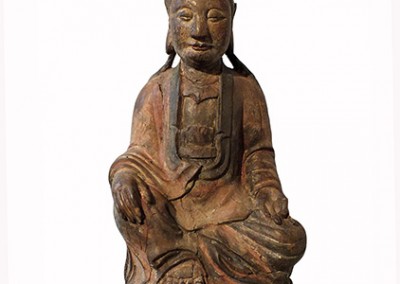 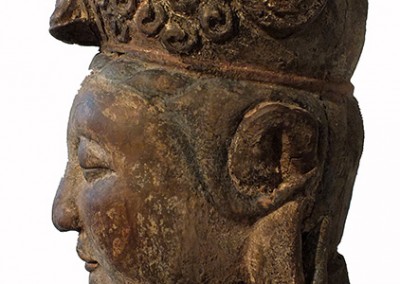 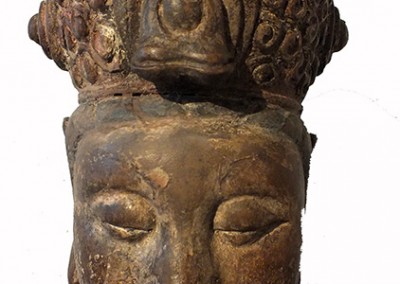 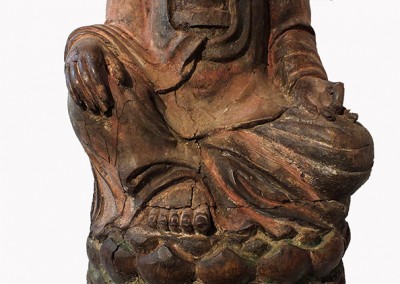 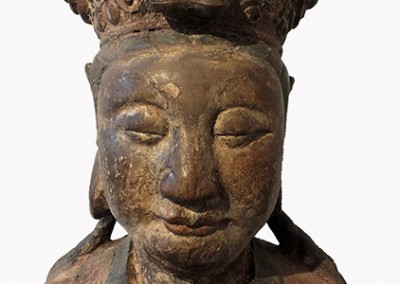 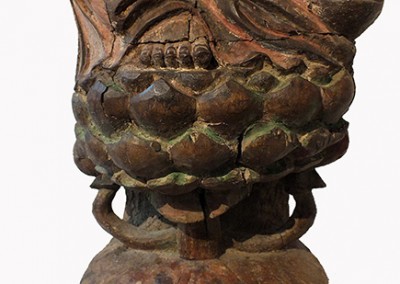 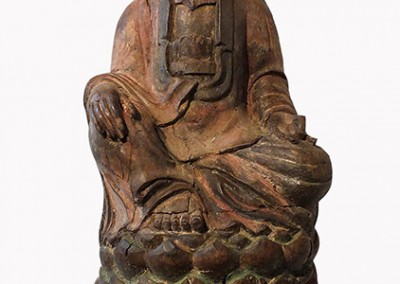 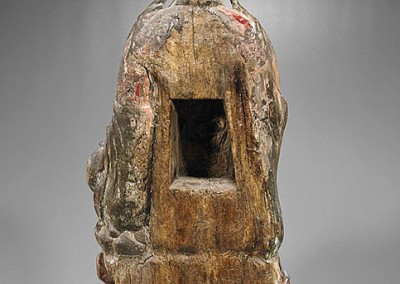 Lovely Large Wood Guanyin, the seated figure with a calm and peaceful countenance, wearing a large peaked crown centred by a figure of Amitaba Buddha and open neck robe, the folds gently falling over the raised knee. The polychrome figure of Guanyin shown seated in Lalitasana (Royal Ease) atop a pedestal lotus base with left hand in vitarka mudra. ¤ Compare the wood seated figure of Guanyin, late Ming dynasty illustrated in Christie’s catalogue, New York, 22 March 1999, p. 134, lot# 168 and wood seated Guanyin illustrated in Sotheby’s catalogue, New York, 22-23 March 1999, p.108 – 109, lot# 326. * Guanyin is an East Asian deity of mercy, and a bodhisattva associated with compassion as venerated by Mahayana Buddhists. The name Guanyin is short for Guanshiyin, which means “Perceiving the Sounds (or Cries) of the World”. She[A] is also sometimes referred to as Guanyin Bodhisattva (Chinese: 觀音菩薩).[1] Some Buddhists believe that when one of their adherents departs from this world, they are placed by Guanyin in the heart of a lotus, and then sent to the western pure land of Sukhāvatī.[2] It is generally accepted among East Asian adherents that Guanyin originated as the Sanskrit Avalokiteśvara. Commonly known in English as the Mercy Goddess or Goddess of Mercy,[3] Guanyin is also revered by Taoists as an immortal. In Chinese folk religion there are mythical accounts about Guanyin’s origins that are not associated with the Avalokiteśvara described in Buddhist sutras.

Guānyīn is a translation from the Sanskrit Avalokitasvara, referring to the Mahāyāna bodhisattva of the same name. Another later name for this bodhisattva is Guānzìzài (simplified Chinese: 观自在; traditional Chinese: 觀自在; pinyin: Guānzìzài). It was initially thought that the Chinese mis-transliterated the word Avalokiteśvara as Avalokitasvara which explained why Xuanzang translated it as Guānzìzài instead of Guānyīn. However, the original form was indeed Avalokitasvara with the ending svara (“sound, noise”), which means “sound perceiver”, literally “he who looks down upon sound” (i.e., the cries of sentient beings who need his help).[4][5][6] This is the exact equivalent of the Chinese translation Guānyīn. This etymology was furthered in the Chinese by the tendency of some Chinese translators, notably Kumarajiva, to use the variant Guānshìyīn, literally “he who perceives the world’s lamentations”—wherein lok was read as simultaneously meaning both “to look” and “world” (Skt. loka; Ch. 世, shì).[6] Direct translations from the Sanskrit name Avalokitasvara include: 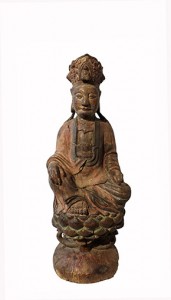