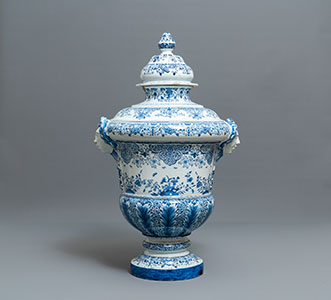 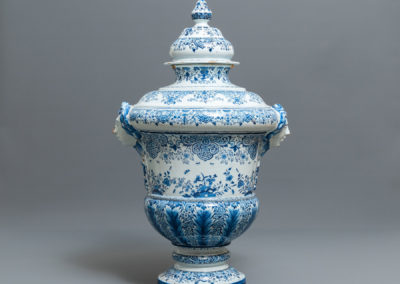 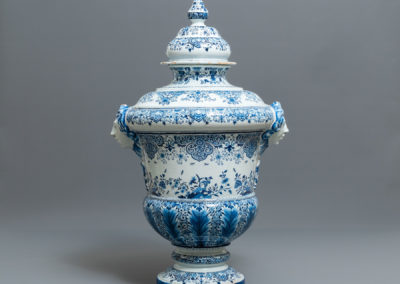 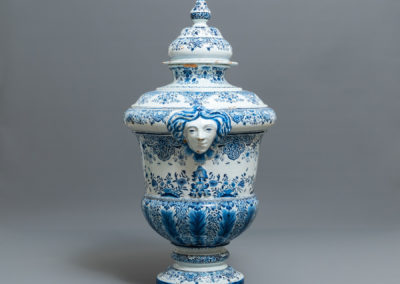 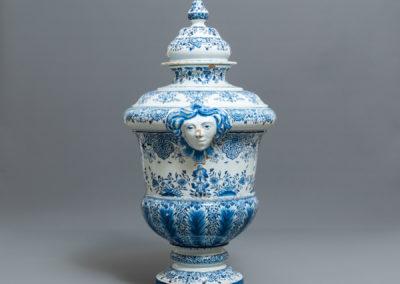 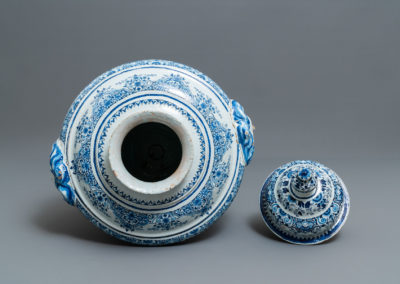 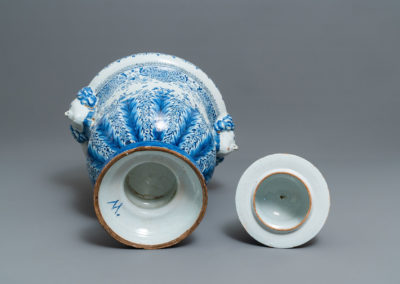 *Delftware or Delft pottery, also known as Delft Blue[1] (Dutch: Delfts blauw), is a general term now used for Dutch tin-glazed earthenware, a form of faience. Most of it is blue and white pottery, and the city of Delft in the Netherlands was the major center of production, but the term covers wares with other colors, and made elsewhere. It is also used for similar pottery that it influenced made in England, but this should be called English delftware to avoid confusion.

Delftware is one of the types of tin-glazed earthenware or faience in which a white glaze is applied, usually decorated with metal oxides, in particular the cobalt oxide that gives the usual blue, and can withstand high firing temperatures, allowing it to be applied under the glaze. It also forms part of the worldwide family of blue and white pottery, using variations of the plant-based decoration first developed in 14th-century Chinese porcelain, and in great demand in Europe.

Delftware includes pottery objects of all descriptions such as plates, vases and other ornamental forms and tiles. The start of the style was around 1600, and the most highly regarded period of production is about 1640–1740, but Delftware continues to be produced. In the 17th and 18th centuries Delftware was a major industry, exporting all over Europe.

During the Dutch Golden Age, the Dutch East India Company had a lively trade with the East and imported millions of pieces of Chinese porcelain in the early 17th century.[9] The Chinese workmanship and attention to detail impressed many. Only the richest could afford the early imports. Dutch potters did not immediately imitate Chinese porcelain; they began to do so after the death of the Wanli Emperor in 1620, when the supply to Europe was interrupted.[8] “Potters now saw an opportunity to produce a cheap alternative for Chinese porcelain. After much experimenting they managed to make a thin type of earthenware which was covered with a white tin glaze. Although made of low-fired earthenware, it resembled porcelain amazingly well.”[10]

Delftware inspired by Chinese originals persisted from about 1630 to the mid-18th century alongside European patterns. Around 1700 several factories were using enamel colours and gilding over the tin-glaze, requiring a third kiln firing at a lower temperature. Later, after Japanese Imari ware had become popular in the late 1600s and early 1700s (when it too tried to fill the gap of the Chinese shortage), Delft began making their own ‘Imari ware’ copying the classic ‘flower vase on a terrace surrounded by three panels with cranes and pine design’. Oriental styles in Delftware remained popular into the early 1700s but then declined when Chinese porcelain became available again.[11]

Delftware ranged from simple household items – plain white earthenware with little or no decoration – to fancy artwork. Most of the Delft factories made sets of jars, the kast-stel set. Pictorial plates were made in abundance, illustrated with religious motifs, native Dutch scenes with windmills and fishing boats, hunting scenes, landscapes and seascapes. Sets of plates were made with the words and music of songs; dessert was served on them and when the plates were clear the company started singing.[12] The Delft potters also made tiles in vast numbers (estimated at eight hundred million[13]) over a period of two hundred years; many Dutch houses still have tiles that were fixed in the 17th and 18th centuries.

Delftware became popular and was widely exported in Europe and even reached China and Japan. Chinese and Japanese potters made porcelain versions of Delftware for export to Europe.

Some regard Delftware from about 1750 onwards as artistically inferior. Caiger-Smith says that most of the later wares “were painted with clever, ephemeral decoration. Little trace of feeling or originality remained to be lamented when, at the end of the eighteenth century, the Delftware potteries began to go out of business.”[14] By this time Delftware potters had lost their market to British porcelain and the new white earthenware. One or two remain: the Tichelaar[15] factory in Makkum, Friesland, founded in 1594 and De Koninklijke Porceleyne Fles (“The Royal Porcelain Bottle”) founded in 1653.

Today, Delfts Blauw (Delft Blue) is the brand name hand painted on the bottom of ceramic pieces identifying them as authentic and collectible. Although most Delft Blue borrows from the tin-glaze tradition, it is nearly all decorated in underglaze blue on a white clay body and very little uses tin glaze, a more expensive product. The Koninklijke Tichelaar Makkum factory in Makkum, Friesland continue the production of tin-glazed earthenware.[16][17]

Delft Blue pottery formed the basis of one of British Airways’ ethnic tailfins. The design, Delftblue Daybreak, was applied to 17 aircraft. 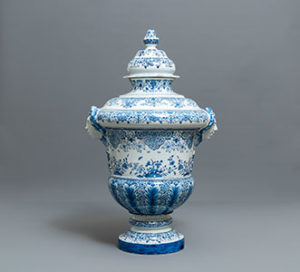 Complete the contact form below to request more information about: Massive Dutch Delft Urn and Cover