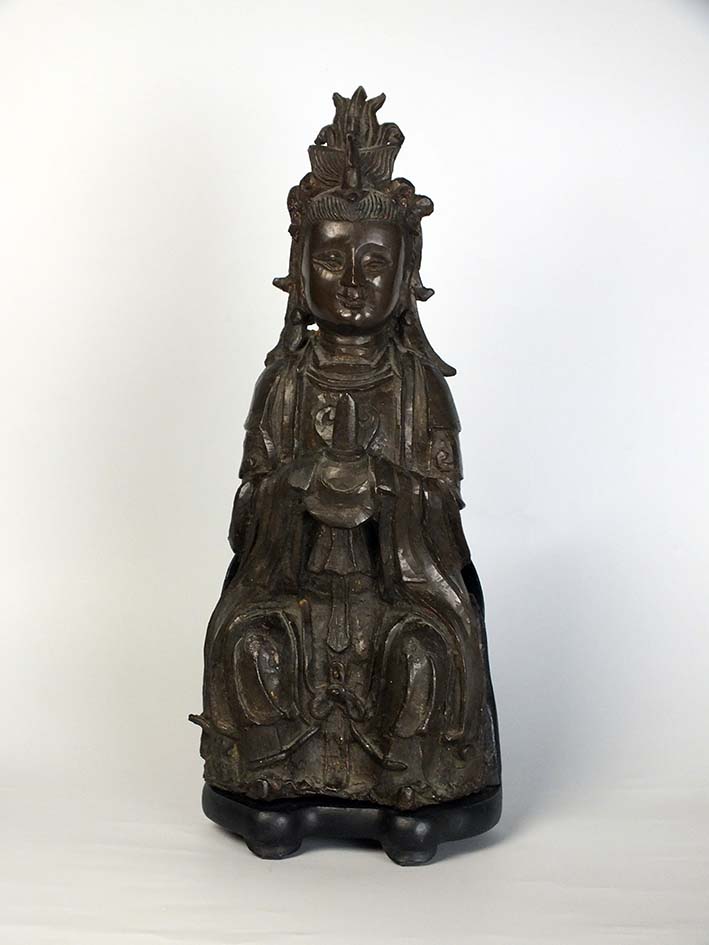 Primordial Princess Bixia Yuanjun seated on a wooden stand with hands held in front holding a sceptre (hu), dressed in multi-layered mantle with chased floral borders and fringed edges covering both shoulders and falling in large folds over the legs, the face displaying a serene expression with downcast eyes framed by pendent earrings, trailing ribbons and an elaborate three-phoenix headdress, wooden stand.

“Bixia Yuanjin (pronounced BEE-cha you-on-JEEN) is the Chinese Taoist Goddess of the dawn, childbirth, and destiny. As Goddess of dawn, She attends the birth of each new day from her home high in the clouds. As Goddess of childbirth, She attends the birth of children, fixing their destiny and bringing good fortune. Bixia Yuanjin is venerated in the Temple of the Purple Dawn at the summit of the holy mountain, Tai Shan, where women wishing to conceive come to ask for Her help. Her father, Tai Shan Wang, is the god of the mountain and judge of the underworld. Her name is also seen as Bixia Yuanjun, Bixia Yuan Jun, Pi Hsia Yuan Chun, and T’ien Hsien Niang Niang, and epithets for her include Princess of the Rosy Clouds, Princess of the Azure Clouds, and the Jade Woman.” [1]

“Bixia Yuanjun (Sovereign of the clouds of dawn) is a Daoist Goddess connected with Mt. Tai in Shandong province. As the easternmost of the five sacred peaks of China, Mt. Tai was considered the gateway to the afterlife throughout Chinese history. Bixia and Her main temple located there attained prominence in the early Ming dynasty (1368 – 1644). Centered in northern China, the Goddess’s popularity extened from the imperial family to common people. Bixia was granted elevated titles, such as Tianxian shengmu (Heavenly immortal, saintly mother) and Tianxian yünu (Hevenly immortal, jade maiden), but She is commonly known as Taishan niangniang (Our Lady of Mt. Tai) or Lao nainai (Granny) in Chinese popular religion. She was charged with setting human life spans and judging the dead, but Her ability to facilitate the birth of male children made Her a particularly popular Goddess among women.

Several disparate versions of Bixia’s hagiography outline Her origins. Elite texts preserved in the Daoist canon declare Her to be the daughter of the god of Mt. Tai whose history as a judge in the courts of hell extends back to the seventh century. Late Ming popular sectarian scriptures, or baojuan (precious volumes), assert that Bixia was the daughter of a commoner. According to the accounts, Her prayers to an ancient Daoist Goddess Xiwangmu (Queen of the West), along with Her practice of self-cultivation, helped Her to achieve immortality.

Temples throughout northern China include images of Bixia. She is most readily identified by Her headdress, which features three or more phoenixes, Bixia usually appears seated with legs pendant and sometimes hold a tablet inscribed with a representiation of the Big Dipper as a symbol of Her authority. Two Goddesses who often attend Bixia are Zisu niangniang (Goddess of children) and Yanguang niangniang (Goddess of eyesight), but Bixia can also appear with in a group of Goddesses” (Jestice, p. 128 – 129). [2]

Goddess-guide.com, “Fertility Goddesses and Goddesses of Pregnancy and Childbirth“.

Little, Stephen. Toaism and the Arts of China, “The Taoist Renaissance” (p. 278).