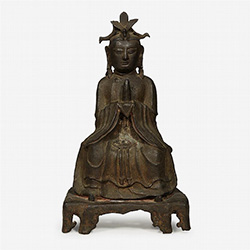 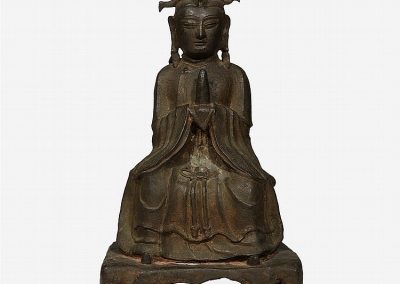 Ming Dynasty Xiwangmu, seated in the so-called European fashion, with both hands in front of her abdomen holding a tablet, wearing various garments including inner garment secured with a ribbon knotted to the front, wide-sleeved mantle incised with scrolling tendrils, necklace, her face displaying a serene expression with slit eyes below slightly arched eyebrows that run into the nose-bridge, smiling lips, elongated earlobes with ear ornaments and her hair coiffed in a chignon secured with a tiara in the shape of a three pheasants, traces of gilt-lacquer

* The Queen Mother of the West, known by various local names, is a goddess in Chinese religion and mythology, also worshipped in neighbouring Asian countries, and attested from ancient times. The first historical information on her can be traced back to oracle bone inscriptions of the fifteenth century BC that record sacrifices to a “Western Mother”. Even though these inscriptions illustrate that she predates organized Taoism, she is most often associated with Taoism. From her name alone some of her most important characteristics are revealed: she is royal, female, and is associated with the west. The growing popularity of the Queen Mother of the West, as well as the beliefs that she was the dispenser of prosperity, longevity, and eternal bliss took place during the second century BC when the northern and western parts of China were able to be better known because of the opening of the Silk Road.

“Queen Mother of the West” is the literal translation of Xiwangmu in Chinese sources, Seiōbo in Japan, and Seowangmo in Korea, and Tây Vương Mẫu in Vietnam. She has numerous titles, one of the most popular being the Golden Mother of the Nacre Lake (also translated as “Mother-of-Pearl Lake” or “Jade Lake”). She is also known in contemporary sources as the Lady Queen Mother. In the Maternist current of Chinese salvationist religions she is the main deity and is called upon as the Eternal Venerable Mother.