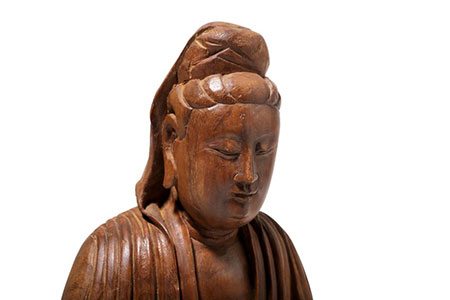 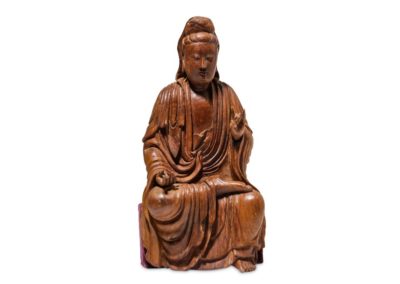 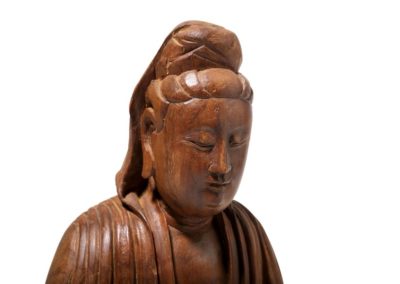 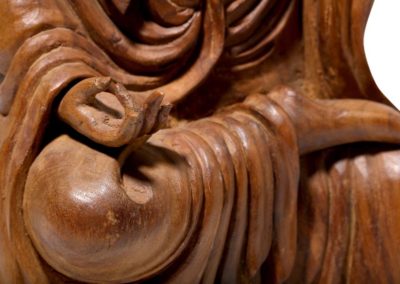 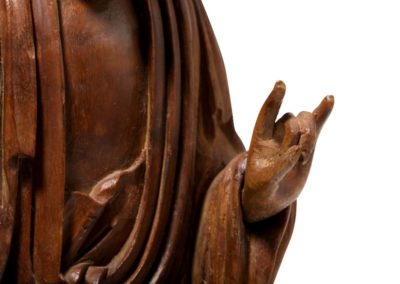 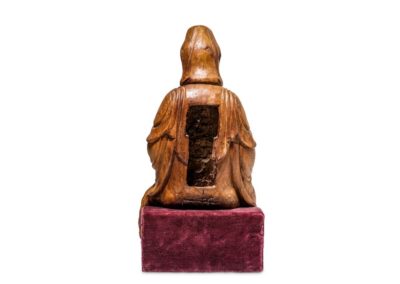 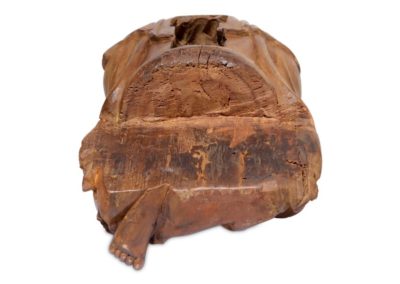 A Chinese Nanmu Guanyin Ming, wearing long flowing robes, seated with her right foot on top of the left knee, her face with a focused expression and downcast eyes, hands arranged in mudras, the back hollowed, together with a velvet stand

The Ming dynasty (/mɪŋ/),[6] officially the Great Ming, was the ruling dynasty of China from 1368 to 1644 following the collapse of the Mongol-led Yuan dynasty. The Ming dynasty was the last imperial dynasty of China ruled by Han Chinese. Although the primary capital of Beijing fell in 1644 to a rebellion led by Li Zicheng (who established the Shun dynasty, soon replaced by the Manchu-led Qing dynasty), numerous rump regimes loyal to the Ming throne – collectively called the Southern Ming – survived until 1662.[d]

The Hongwu Emperor (r. 1368–1398) attempted to create a society of self-sufficient rural communities ordered in a rigid, immobile system that would guarantee and support a permanent class of soldiers for his dynasty:[7] the empire’s standing army exceeded one million troops and the navy’s dockyards in Nanjing were the largest in the world.[8] He also took great care breaking the power of the court eunuchs[9] and unrelated magnates, enfeoffing his many sons throughout China and attempting to guide these princes through the Huang-Ming Zuxun, a set of published dynastic instructions. This failed when his teenage successor, the Jianwen Emperor, attempted to curtail his uncles’ power, prompting the Jingnan Campaign, an uprising that placed the Prince of Yan upon the throne as the Yongle Emperor in 1402. The Yongle Emperor established Yan as a secondary capital and renamed it Beijing, constructed the Forbidden City, and restored the Grand Canal and the primacy of the imperial examinations in official appointments. He rewarded his eunuch supporters and employed them as a counterweight against the Confucian scholar-bureaucrats. One, Zheng He, led seven enormous voyages of exploration into the Indian Ocean as far as Arabia and the eastern coasts of Africa.

The rise of new emperors and new factions diminished such extravagances; the capture of the Zhengtong Emperor during the 1449 Tumu Crisis ended them completely. The imperial navy was allowed to fall into disrepair while forced labor constructed the Liaodong palisade and connected and fortified the Great Wall of China into its modern form. Wide-ranging censuses of the entire empire were conducted decennially, but the desire to avoid labor and taxes and the difficulty of storing and reviewing the enormous archives at Nanjing hampered accurate figures.[7] Estimates for the late-Ming population vary from 160 to 200 million,[10] but necessary revenues were squeezed out of smaller and smaller numbers of farmers as more disappeared from the official records or “donated” their lands to tax-exempt eunuchs or temples.[7] Haijin laws intended to protect the coasts from “Japanese” pirates instead turned many into smugglers and pirates themselves.

By the 16th century, however, the expansion of European trade – albeit restricted to islands near Guangzhou such as Macau – spread the Columbian Exchange of crops, plants, and animals into China, introducing chili peppers to Sichuan cuisine and highly productive maize and potatoes, which diminished famines and spurred population growth. The growth of Portuguese, Spanish, and Dutch trade created new demand for Chinese products and produced a massive influx of Japanese and American silver. This abundance of specie remonetized the Ming economy, whose paper money had suffered repeated hyperinflation and was no longer trusted. While traditional Confucians opposed such a prominent role for commerce and the newly rich it created, the heterodoxy introduced by Wang Yangming permitted a more accommodating attitude. Zhang Juzheng’s initially successful reforms proved devastating when a slowdown in agriculture produced by the Little Ice Age joined changes in Japanese and Spanish policy that quickly cut off the supply of silver now necessary for farmers to be able to pay their taxes. Combined with crop failure, floods, and epidemic, the dynasty collapsed before the rebel leader Li Zicheng, who was defeated by the Manchu-led Eight Banner armies who founded the Qing dynasty.