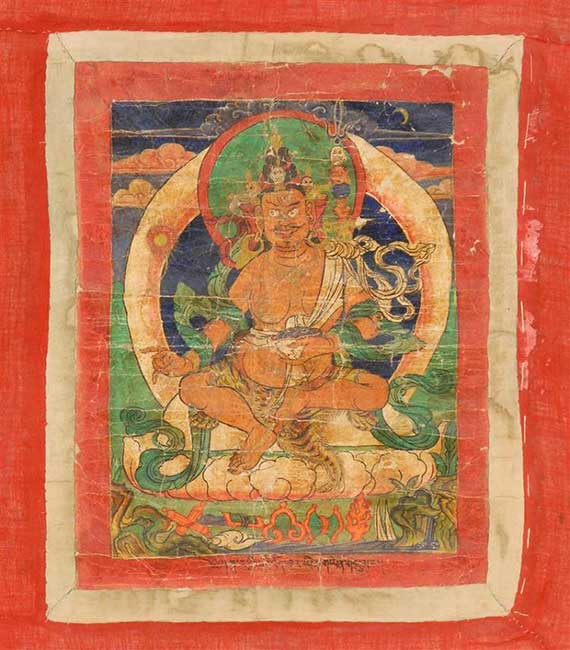 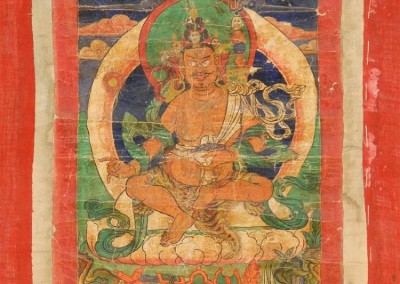 A thangka, variously spelt as tangka, thanka or tanka (Nepali pronunciation: [ˈt̪ʰaŋka]; Tibetan: ཐང་ཀ་; Nepal Bhasa: पौभा) is a Tibetan Buddhist painting on cotton, or silk appliqué, usually depicting a Buddhist deity, scene, or mandala. Thangkas are traditionally kept unframed and rolled up when not on display, mounted on a textile backing somewhat in the style of Chinese scroll paintings, with a further silk cover on the front. So treated, thangkas can last a long time, but because of their delicate nature, they have to be kept in dry places where moisture will not affect the quality of the silk. Most thankas are relatively small, comparable in size to a Western half-length portrait, but some are extremely large, several metres in each dimension; these were designed to be displayed, typically for very brief periods on a monastery wall, as part of religious festivals. Most thankas were intended for personal meditation or instruction of monastic students. They often have elaborate compositions including many very small figures. A central “deity” is often surrounded by other identified figures in a symmetrical composition. Narrative scenes are less common, but do appear.

Thangka serve as important teaching tools depicting the life of the Buddha, various influential lamas and other deities and bodhisattvas. One subject is The Wheel of Life (Bhavachakra), which is a visual representation of the Abhidharma teachings (Art of Enlightenment). The term may sometimes be used of works in other media than painting, including reliefs in metal and woodblock prints. Today printed reproductions at poster size of painted thangka are commonly used for devotional as well as decorative purposes. Many thangka were produced in sets, though they have often subsequently become separated.

Thangka perform several different functions. Images of deities can be used as teaching tools when depicting the life (or lives) of the Buddha, describing historical events concerning important Lamas, or retelling myths associated with other deities. Devotional images act as the centerpiece during a ritual or ceremony and are often used as mediums through which one can offer prayers or make requests. Overall, and perhaps most importantly, religious art is used as a meditation tool to help bring one further down the path to enlightenment. The Buddhist Vajrayana practitioner uses a thanga image of their yidam, or meditation deity, as a guide, by visualizing “themselves as being that deity, thereby internalizing the Buddha qualities”[1] Thangkas hang on or beside altars, and may be hung in the bedrooms or offices of monks and other devotees. 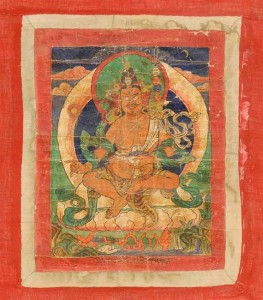