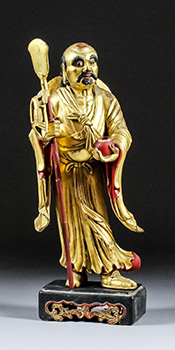 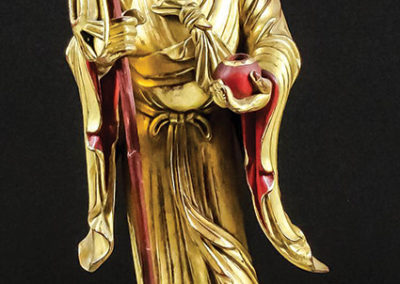 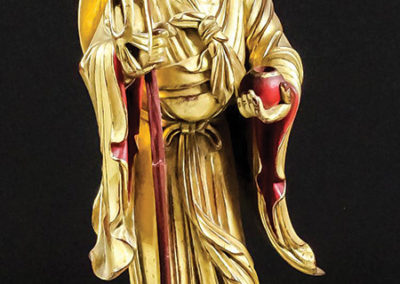 Chinese Giltwood Bodhidharma, an Immortal carrying his circular hat on his back. He is holding a staff in his right hand and an armed bow in his left hand. The Bodhidharma  standing on carved rectangular wooden stand.

Here is a short history on the Keith Stevens collection of Chinese gods and goddesses.

Born in 1926, growing up in the port city of Liverpool he was exposed to the influence of the British empire and the exotic cultures and goods which he would have seen passing through the city’s streets as a school boy.  These early influences lead to his ambition of wanting to learn Chinese. He was an Indian and British army officer and served with the famous 5th Royal Gurkhas Rifles regiment during WWII who recruited their soldiers from Nepal. It was this early connection with trade, Empire and Asia, that was to have a profound affect on his later working life.
Post war he returned to Britain to study Chinese at SOAS and then later at HKU. He rejoined the Army and worked with the Intelligence Corps, spending time in Malaysia and Singapore. Using his language skills, he then took up a post with the British foreign and commonwealth office in their research dept. He joined the Royal Asiatic Society in 1963 and published 36 articles relating to Chinese religious iconography. Which subsequently lead to the publication of his life’s time work & passion: Chinese Gods, The Unseen World of Spirits and Demons, London, Collins & Brown 1997.
His family recount many tales of dad going off “Godding” exploring temples in southern China and across Asia recording his visits meticulously with notes on each temple and further supported with over 30,000 photographs. In all he visited over 3,500 temples in China, Taiwan, Macau and across SE Asia, documenting the temple lay out, altars, gods and legends and folklore surrounding more than 2,500 gods.

His collection today contains approximately 1000 deities, the majority carved wood, brightly painted and gilded from Southern China.
Some still retain the dedication slips in the back of the figures. He records when and where he purchased them, mostly in the Hong Kong antique market between the 1960’s and 1980’s. 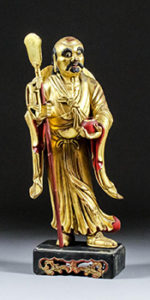