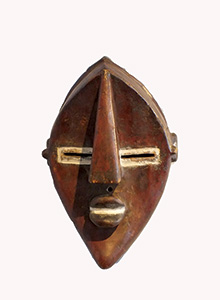 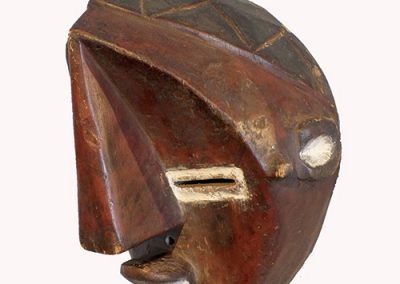 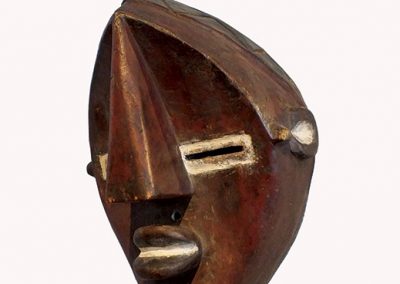 Fine Lwalwa Mask, the eyes as pierced slits below the overhanging brow. Rounded prominent nose. The protuberant mouth with kaolin between the pared lips. Cylindrical keloids to temples. Pierced hole to each cheek and below the nose for retention cord. The coiffure with grooved interlaced triangles, native raffia mend to rim. The mask has dark glossy patina.

Types of Art: Some small figures are carved for divination and display on shrines, but the majority of Lwalwa art in collections consists of beautifully sculpted masks, characteristically elongated, with prominent noses, rectangular eyes, and a small hole between the mouth and nose, through which a cord is passed in order to secure the mask on a dancer’s face.

History: Lwalwa tribal origins are closely tied to the Kete who live to the north and originally migrated from the area currently located between the Luba and Songye Kingdoms. Before the 17th century the Lwalwa were divided into small matrilineal chiefdoms. Later they became part of the ties established between the Lunda and Luba. However, they always remained independent, refused to pay tribute, and never truly accepted the Lunda chiefs as overseers. Instead the Lwalwa have formed a political union between themselves, the Mbagani, the Salampasu, and the Kete. They have remained relatively isolated from outside influences, due to their location between the Kasai and Lueta rivers, and were virtually cut off from trade routes. 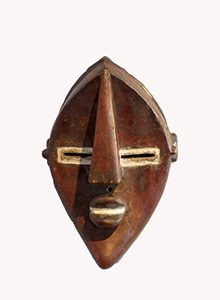