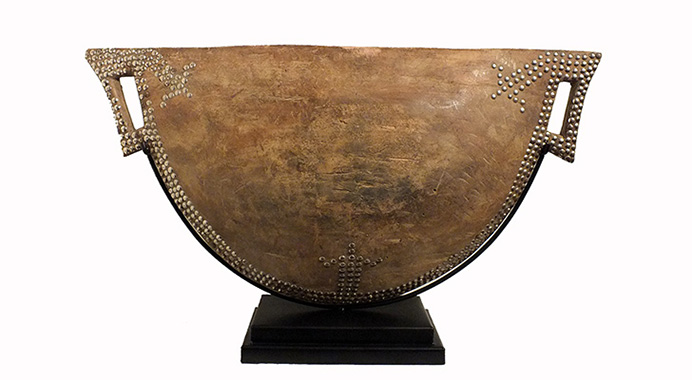 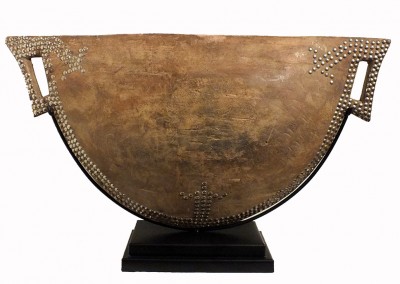 Democratic Republic of the Congo

Superb Mangbetu Drum, semi-circular drum inset with copper nails. In the shape of a flattened bell, nedundu were used for various purposes, including announcing the arrival of an important person, the beginning of an event and for the use in dancing.

* The Mangbetu are a people of the Democratic Republic of the Congo, living in the Orientale Province.

The language is called kingbetu in the regional language of Lingala, but the Mangbetu call it nemangbetu. It is a member of the Central Sudanic language family.

The Mangbetu are known for their highly developed art and music. One instrument associated with and named after them is the Mangbetu harp or guitar. See [1] and. [2] for images. One harp has sold for over $100,000.[2]

Musicologists have also sought out the Mangbetu to make video and audio recordings of their music.[3]

The Mangbetu stood out to European explorers because of their elongated heads. Traditionally, babies’ heads were wrapped tightly with cloth in order to give them this distinctive appearance. The practice began dying out in the 1950s with the arrival of more Europeans and westernization. Because of this distinctive look, it is easy to recognize Mangbetu figures in African art.

By the early 18th century the Mangbetu had consisted of a number of small clans who, from southward migrations, had come in contact with a number of northward-migrating Bantu-speaking tribes among whom they lived interspersed. In the late 18th century a group of Mangbetu-speaking elites, mainly from the Mabiti clan, assumed control over other Mangbetu clans and many neighboring Bantu-speaking tribes. It is likely that their knowledge of iron and copper forgery, by which they made weapons and fine ornaments, gave them a military and economic advantage over their neighbors.[4] 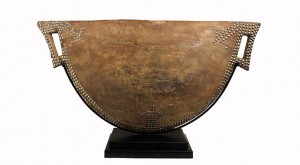