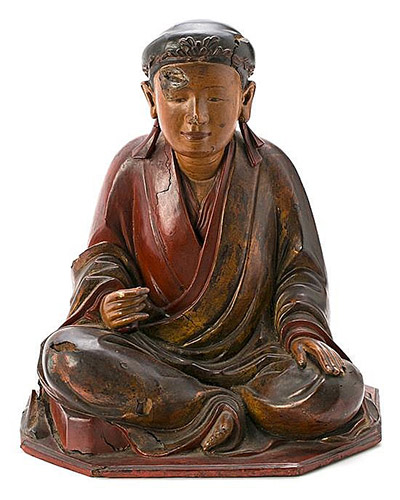 Vietnamese Polychrome Lacquered and Gilt-wood Figure of a Lohan

Gilt Wood Lohan, finely carved lacquered and gilt wooden figure of a Lohan, Vietnamese school, seated cross-legged on a rectangular base with the left hand resting on a slightly raised knee, the other hand holding a sceptre in his lap (now missing), wearing long wide-sleeved robe, his face with serene expression, the hair gathered under a cap, same old damage and wear.

* Buddhism in Vietnam (Vietnamese: đạo Phật or Phật giáo) as practiced by the ethnic Vietnamese is mainly of the Mahāyāna tradition.[1] Buddhism may have first come to Vietnam as early as the 3rd or 2nd century BC from South Asia, or from China in the 1st or 2nd century AD.[2] Vietnamese Buddhism has had a symbiotic relationship with certain elements of Taoism, Chinese spirituality, and the Vietnamese indigenous religion.[3]

There are conflicting theories regarding whether Buddhism first reached Vietnam during the 3rd or 2nd century BC via delegations from India, or during the 1st or 2nd century AD from China.[4] In either case, by the end of the 2nd century, Vietnam had developed into a major regional Buddhist center (probably Mahayana), centering on Luy Lâu in modern Bắc Ninh Province, northeast of the present day capital city of Hanoi. Luy Lâu was the capital of Giao Chỉ, (the former name of Vietnam), and was a popular place visited by many Indian Buddhist missionary monks en route to China. The monks followed the maritime trade route from the Indian sub-continent to China used by Indian traders. A number of Mahayana sutras and the Agamas were translated into Chinese script at that center, including the Sutra of Forty-two Chapters and the Anapanasati.

Over the next eighteen centuries Vietnam and China shared many common features of cultural, philosophical and religious heritage. This was due to geographical proximity to one another and Vietnam being annexed twice by China. Vietnamese Buddhism is thus related to Chinese Buddhism in general, and to some extent reflects the formation of Chinese Buddhism after the Song dynasty.[5] Theravada Buddhism on the other hand, would become incorporated through the southern annexation of the Khmer land and Khmer people.

During the Đinh dynasty (968-980) Buddhism was recognized by the state as an official faith (~971), reflecting the high esteem of Buddhist faith held by the Vietnamese monarchs.[6] The Early Lê dynasty (980-1009) also afforded the same recognition to the Buddhist church. The growth of Buddhism during this time is attributed to the recruitment of erudite monks to the court as the newly independent state needed an ideological basis on which to build a country. Subsequently this role was ceded to Confucianism.[7]

Vietnamese Buddhism reached its zenith during the Lý Dynasty (1009–1225) beginning with the founder Lý Thái Tổ who was raised in a pagoda (Buddhist temple).[8] All of the kings during the Lý dynasty professed and sanctioned Buddhism as the state religion. This endured with the Trần dynasty (1225–1400) but Buddhism had to share the stage with the emerging growth of Confucianism.

By the 15th century, Buddhism fell out of favor with the court during the Later Lê dynasty although still popular with the masses. Officials like Lê Quát attacked it as heretical and wasteful.[9] It was not until the 19th century that Buddhism regained some stature under the Nguyễn dynasty who accorded royal support.[10]

A Buddhist revival movement (Chấn hưng Phật giáo) emerged in the 1920s in an effort to reform and strengthen institutional Buddhism, which had lost grounds to the spread of Christianity and the growth of other faiths under French rule. The movement continued into the 1950s.[11]