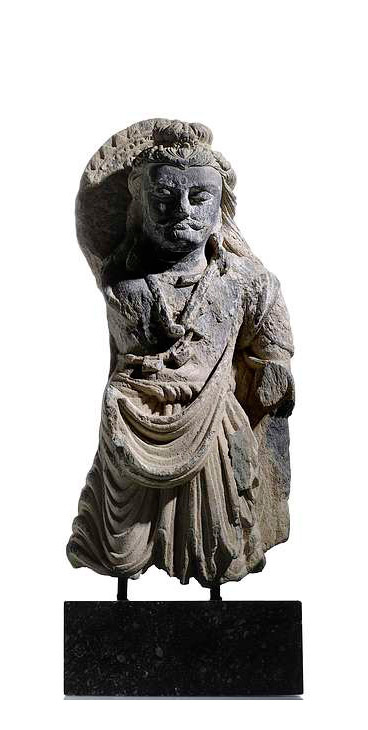 Property of a noble private collection purchased before 1930

IMPRESSIVE MAITREYA, standing with the legs slightly apart, clad in a long dhoti and a sweeping shawl, further adorned with various jewelled necklaces and small round earrings, his face in a serene expression with a moustache, heavy-lidded eyes and arched brows centred by an urna, his wavy hair falling on his shoulders and pulled atop his head in a chignon secured with a jewelled tiara, his head backed by a round ninbus carved in shallow relief with lotus petals within a geometric border.

(Pashto: ګندارا‎, Urdu: گندھارا‎, Avestan: Vaēkərəta, Sanskrit Puruṣapura) was an ancient kingdom extending to the Swat valley, and potohar plateau regions of Pakistan as well as the Jalalabad district of northeastern Afghanistan. During the Hellenistic period, its capital city was Pushkalavati, present-day Charsadda, but later the capital city was shifted to Peshawar by the Kushan emperor Kanishka the Great in about 127. It is mentioned in the Zend Avesta as Vaēkərəta, the sixth most beautiful place on earth created by Ahura Mazda. It was known in Sanskrit as Puruṣapura, literally meaning “city of men”,[note 1]. It was known as the “crown jewel” of Bactria and also held sway over Takṣaśilā (modern Taxila).[1] The Kingdom of Gandhara lasted from the Vedic period (c. 1500-500 BC). As a center of Greco-Buddhism, Bactrian Zoroastrianism and Animism, Gandhara attained its height from the 1st century to the 5th century under the Kushan Kings. The Persian term Shahi is used by history writer Al-Biruni[2] to refer to the ruling dynasty[3] that took over from the Kabul Shahi[4] and ruled the region during the period prior to Muslim conquests of the 10th and 11th centuries. After it was conquered by Mahmud of Ghazni in 1001 AD, the name Gandhara disappeared. During the Muslim period the area was administered from Lahore or from Kabul. During Mughal times it was an independent district which included the Kabul province.

The decline of the Empire left the sub-continent open to Greco-Bactrian invasions. Present-day southern Afghanistan was absorbed by Demetrius I of Bactria in 180 BC. Around about 185 BC, Demetrius invaded and conquered Gandhara and the Punjab. Later, wars between different groups of Bactrian Greeks resulted in the independence of Gandhara from Bactria and the formation of the Indo-Greek kingdom. Menander was its most famous king. He ruled from Taxila and later from Sagala (Sialkot). He rebuilt Taxila (Sirkap) and Pushkalavati. He became a Buddhist and is remembered in Buddhists records due to his discussions with a great Buddhist philosopher, Nāgasena, in the book Milinda Panha.

Around the time of Menander’s death in 140 BC, the Central Asian Kushans overran Bactria and ended Greek rule there. Around 80 BC, the Sakas, diverted by their Parthian cousins from Iran, moved into Gandhara and other parts of Pakistan and Western India. The most famous king of the Sakas, Maues, established himself in Gandhara.

By 90 BC the Parthians had taken control of eastern Iran and in around 50 BC they put an end to the last remnants of Greek rule in today’s Afghanistan. Eventually an Indo-Parthian dynasty succeeded in taking control of Gandhara. The Parthians continued to support Greek artistic traditions. The start of the Gandharan Greco-Buddhist art is dated to about 75–50 BC. Links between Rome and the Indo-Parthian kingdoms existed. There is archaeological evidence that building techniques were transmitted between the two realms. Christian records claim that around AD 40 Thomas the Apostle visited India and encountered the Indo-Parthian king Gondophares.[28]