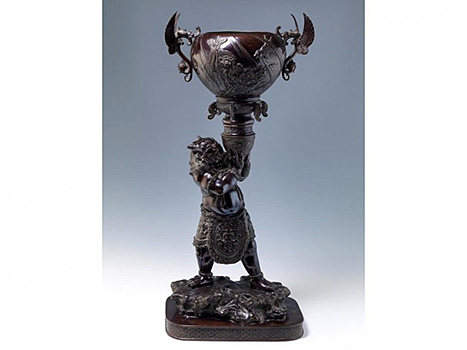 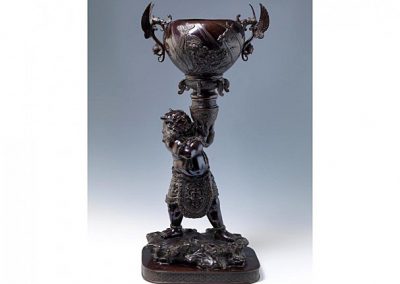 Impressive Bronze ONI Figure. The Oni standing on curly waves amid five Tokugawa crests. Has four toes and four fingers. Two horns and it wears the elaborate coiffure of a reptile. Lifting large bronze burner composed of a large basin in the bulging belly and winged dragons shaped handles.

In folklore there are also tales of supernatural creatures called the ‘Oni’. Artists depict the ‘Oni’ with horns and wearing tiger skins. They have no neck, but a crest of hair and a big mouth; their fingers are clawed, and their arms elevated to the shoulders. These artistic renditions of demons not only represent the supernatural, but also embodiments of the evil facets of human nature. The earth ‘Oni’, according to Buddhist belief, are responsible for disease and epidemics (they are dressed in red). The ‘Oni’ of hell (red or green bodies) hunt for sinners and taking them by chariot to Emma-Hoo, the god of hell. There are invisible demons among the ‘Oni’ whose presence can be detected because they sing or whistle. The ‘Oni’ who are women are those transformed into demons after death by jealousy or violent grief. The Buddhist ‘Oni’ demons did not always represent the forces of evil.In Buddhist lore there are tales of monks who after death became ‘Oni’ in order to protect temples from potential disasters. The belief in the ‘Oni’, reached its zenith in the 18th and 19th centuries.

* Oni (鬼) are a kind of yōkai from Japanese folklore, variously translated as demons, devils, ogres, or trolls. They are popular characters in Japanese art, literature and theatre.

Depictions of oni vary widely but usually portray them as hideous, gigantic ogre-like creatures with sharp claws, wild hair, and two long horns growing from their heads. They are humanoid for the most part, but occasionally, they are shown with unnatural features such as odd numbers of eyes or extra fingers and toes. Their skin may be any number of colors, but red and blue are particularly common.

They are often depicted wearing tiger-skin loincloths and carrying iron clubs called kanabō (金棒). This image leads to the expression “oni with an iron club” (鬼に金棒 oni-ni-kanabō), that is, to be invincible or undefeatable. It can also be used in the sense of “strong beyond strong”, or having one’s natural quality enhanced or supplemented by the use of some tool. In addition to this, it can mean to go overboard, or be unnecessarily strong or powerful.