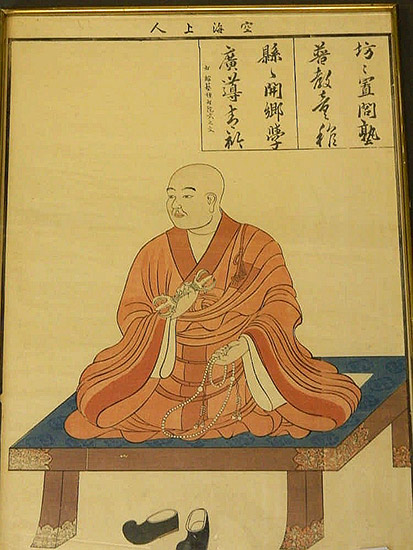 * Woodblock printing in Japan (Japanese: 木版画, moku hanga) is a technique best known for its use in the ukiyo-e artistic genre; however, it was also used very widely for printing books in the same period. Woodblock printing had been used in China for centuries to print books, long before the advent of movable type, but was only widely adopted in Japan surprisingly late, during the Edo period (1603-1867). Although similar to woodcut in western printmaking in some regards, the moku hanga technique differs in that it uses water-based inks—as opposed to western woodcut, which often uses oil-based inks. The Japanese water-based inks provide a wide range of vivid colors, glazes, and transparency.

The technique for printing texts and images was generally similar. The obvious differences were the volume produced when working with texts (many pages for a single work), and the complexity of multiple colors in some images. Images in books were almost always in monochrome (black ink only), and for a time art prints were likewise monochrome or done in only two or three colors.

The text or image was first drawn onto washi (Japanese paper), then glued face-down onto a plank of wood, usually cherry. Wood was then cut away, based on the drawing outlines. A small wooden hard object called a baren was used to press or burnish the paper against the inked woodblock to apply the ink to the paper. Although this may have been done purely by hand at first, complex wooden mechanisms were soon invented and adopted to help hold the woodblock perfectly still and apply proper pressure in the printing process. This was especially helpful with the introduction of multiple colors that had to be applied with precision over previous ink layers.

While, again, text was nearly always monochrome, as were images in books, the growth of the popularity of ukiyo-e brought with it demand for ever increasing numbers of colors and complexity of techniques. The stages of this development follow: