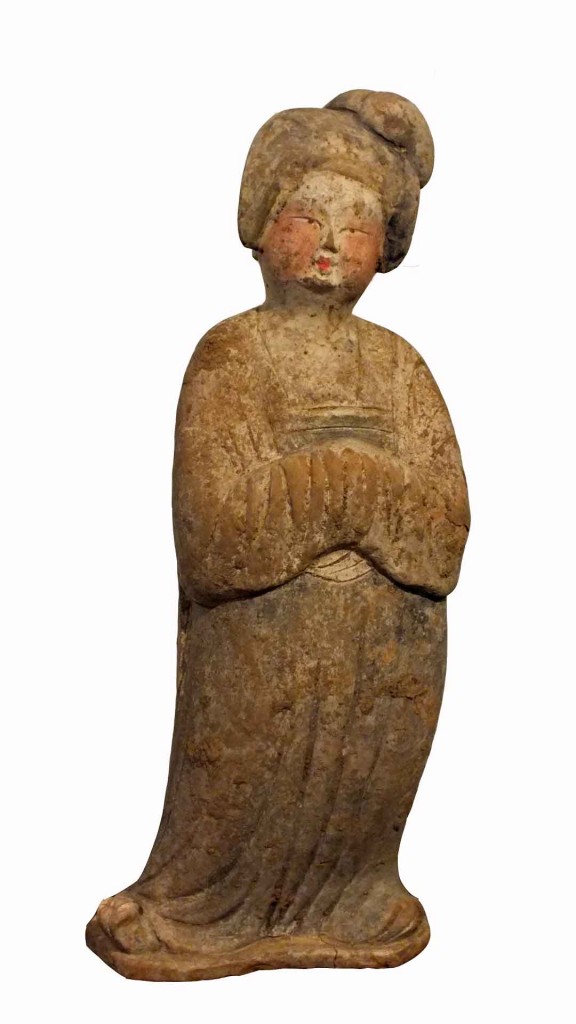 Large Tang  Fat Lady, a painted pottery figure of a court lady, the elegant figure shown standing gracefully on a shaped base holding her completely hidden hands in front of her, in order to provide a more graceful arrangement of her sleeves. The long heavy robes falling in deep fold to reveal one of her cloud-toed shoes, her full face modelled with delicate features framed by the stiff wings of her coiffure which is drawn up into a large loop worn to one side,

* This elegant figure exemplifies the court ladies that became fashionable in the second half of the Tang dynasty. Figures of similar style were excavated from the tomb of Wu Shouzhong, in Xi’an, Shaaxi province, in the 748 A.D.

The figures of this type usually hold their hands in front of them, in order to provide a more graceful arrangement of their sleeves. Some have their hands completely hidden, as can be seen in the present court lady and three other figures from the Schloss Collection. See J. Baker, Seeking Immortality – Chinese Tomb Sclupture from the Schloss Collection, Bowers Museum of Cultural Art, Santa Ana, 1996, p. 34, no. 17