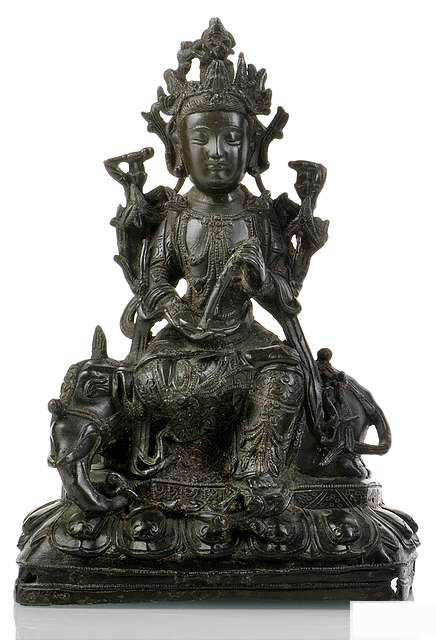 Ming Dynasty Large Samantabhadra, 普賢菩薩騎象. The bronze Bodisattva of action is sated in royal posture, rajalilasana, on the White Elephant (some believe that the white elephant mount of Samantabhadra was the same elephant that appeared to Queen Maya, the mother of the Buddha, to herald his birth) with his legs tucked under, placed on a lotus base, his head is turned towards the viewer displaying protruding eyes, his back is covered with a saddle cloth and decorated with ornaments around while his tail curling along his body to the front, the Samantabhadra holding the Ruyi sceptre, furthermore both hands hold the stems of lotuses flowering along the upper arms, wearing dhoti secured with a girdle decorated with swaying tassels, scarf bandoleer the chest, cape draped over the shoulders, its streamers encircling both arms with its finials curling over the White Elephant, bejewelled, her face displaying a serene expression with downcast eyes below arched eyebrows that run into the nose-bridge, smiling lips, elongated earlobes with ear ornaments, her hear combed in a chignon with tresses falling down and coiling over her shoulders, secured with an elaborate and pierced tiara and decorated with a pair of pattras,  remaining of red, blue and green polychrome.

Unlike his more popular counterpart Manjusri, Samantabhadra is only rarely depicted alone and is usually found in a trinity on the right side of Shakyamuni, mounted on a white elephant. In those traditions that accept the Avatamsaka Sutra as its root instruction, Samantabhadra and Manjusri flank Vairocana Buddha, the central Buddha of this particular sutra.

Known as Pǔxián in Chinese, he is sometimes shown in Chinese art with feminine characteristics, riding an elephant with six pairs of tusks while carrying a lotus leaf ‘parasol’ (Sanskrit: chhatra), bearing similar dress and features to some feminine depictions of Kuan Yin. It is in this guise that Samantabhadra is revered as the patron bodhisattva of the monasteries associated with Mount Emei in western China. Some believe that the white elephant mount of Samantabhadra was the same elephant that appeared to Queen Maya, the mother of the Buddha, to herald his birth.

* ¹ From Wikipedia, the free encyclopedia