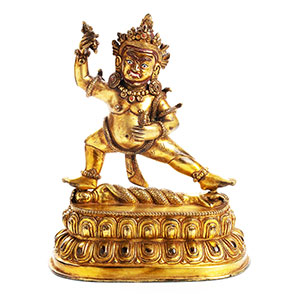 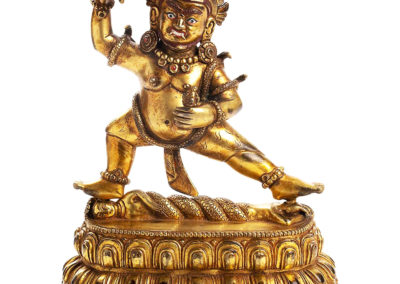 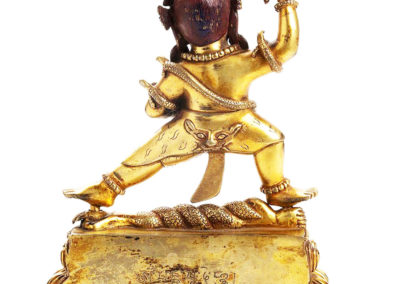 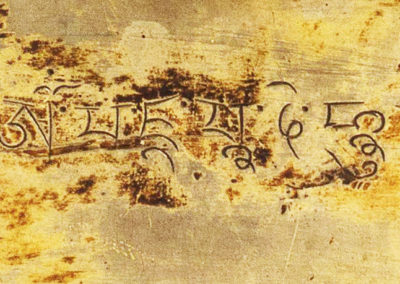 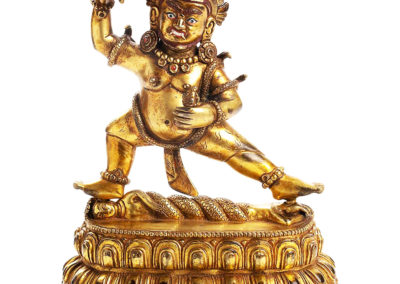 Tibeto Chinese Gilt Bronze Vajraoani. The standing deity with his feet crushing head and feet of a reclining figure, supported by a double lotus flower base, the right arm raised to hold a vajra, the left one at chest level with a bell, the face with a grim expression surmounted by a tiara adorned with flowers, an incised Sanskrit inscription to the back of the base.
Tibeto Chinese, 18th-19thh century
19 cm high
Provenance: Italian private collection.

* Vajrapāṇi (Sanskrit: “Vajra in [his] hand”) is one of the earliest-appearing bodhisattvas in Mahayana Buddhism. He is the protector and guide of Gautama Buddha and rose to symbolize the Buddha’s power.

Vajrapāni is one of the earliest Dharmapalas of Mahayana Buddhism and also appears as a deity in the Pali Canon of the Theravada school. He is worshiped in the Shaolin Monastery, in Tibetan Buddhism and in Pure Land Buddhism (where he is known as Mahasthamaprapta and forms a triad with Amitābha and Avalokiteśvara). Manifestations of Vajrapāni can also be found in many Buddhist temples in Japan as Dharma protectors called Nio. Vajrapāni is also associated with Acala, who is venerated as Fudō-Myōō in Japan, where he is serenaded as the holder of the vajra.

In Tibet, Vajrapani is represented in many fierce forms. Some of the notable ones are: Vajrapani-Acharya (Dharamapala) in a human form with only one head with a third eye with hair raised and crowned by a skull with fiery expression. His neck is adorned with a necklace of snakes, and with waist band made of tiger skin covered with skulls. Stepping to the right, his lifted hand holds a vajra. When painted in blue colour the image is encircled by flames with images of small Garudas; Nilambara-Vajrapani with one head, with a third eye, a crown made of skull with four or six arms and in some cases with untidy hair bedecked with vajra and snake. Two hands are crossed to the breast in mystic posture (mudra), the second right hand is lifted up and carries a vajra. Stepping to the right, regally crowned and lying over a bed of snakes;[13] in Achala-Vajrapani form he is shown with four heads, four arms and four legs adorned with symbols of vajra, sword, lasso and skull cup (kapala) and trampling over demons;[13] Mahachakra-Vajrapani is a form with three heads and a third eye, and with six arms and two legs. The icon is adorned with symbols of vajra, snake with yum held in its main hands, and as shakti it to his left is shown holding a skull-cup (kapala) and grigug (chopper or hooked knife). The icon is shown stepping over Brahma on the right and on Shiva to the left;[13] in the Thunderbolt-Wielder form known as “snake charm form” to protect from snake bites, he is depicted sitting on a lotus throne carried by peacocks. The right hand posture holds one end of rope noose to capture snake demons while the left hand held over the hips carries the other end of the noose. He is followed by two bodhisattvas – “Sarvanivarana-Vishkambhin, Effacer of Stains, and Samantabhadra, the Entirely Virtuous One”. His adornments consist of a tall crown and snakes coiling his arms and ankles. In a painted form, usually in white colour “crossed-vajra” is held to the left raised above the accompanying Bodhisattvas but when painted in blue colour the left hand holds a double vajra;[19] his Garuda form is with wings and claws or with human head with a beak or head with wings fully spread (his painted form is in blue colour). he may be trampling over a demon or dead naga (snake). In some images he is shown carrying a sword, a bottle in the shape of a gourd, a chopper or hands held in a prayer mode. 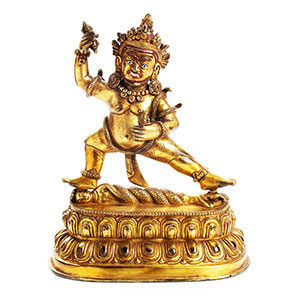