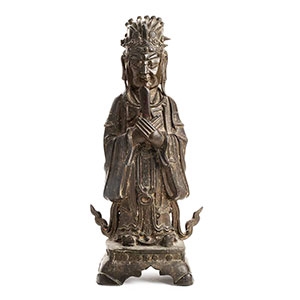 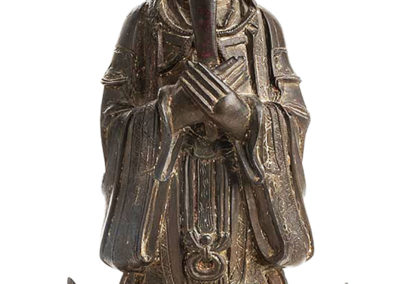 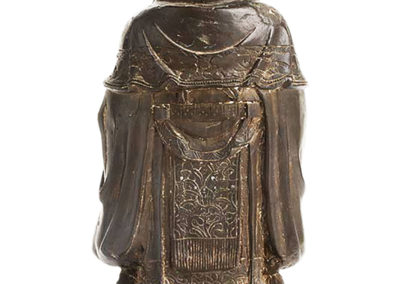 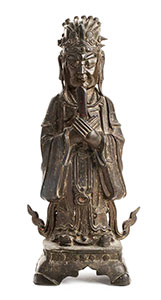 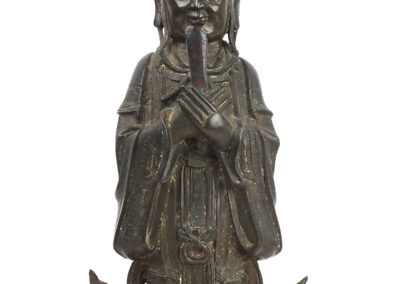 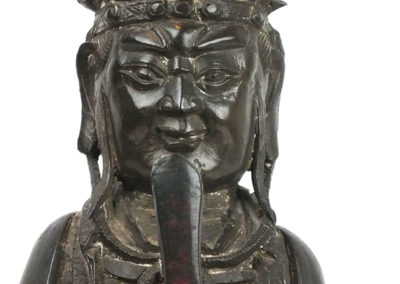 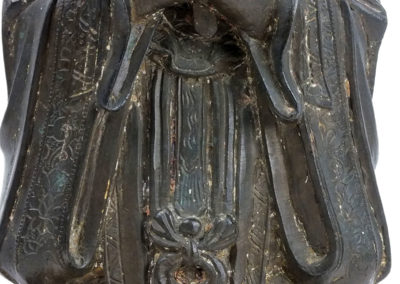 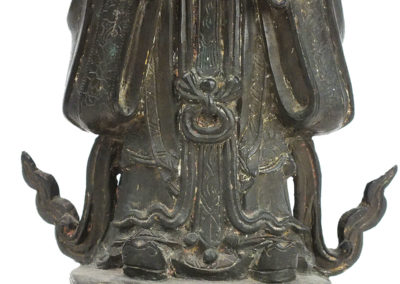 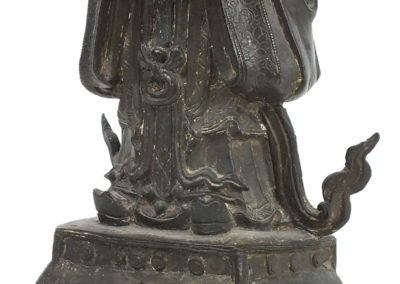 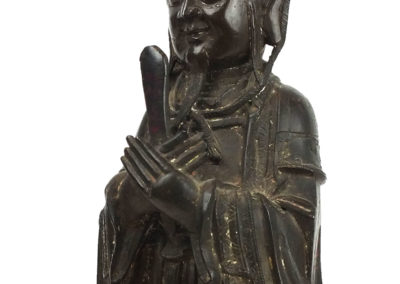 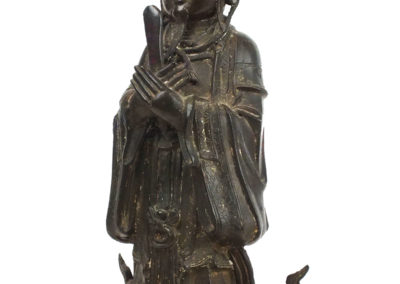 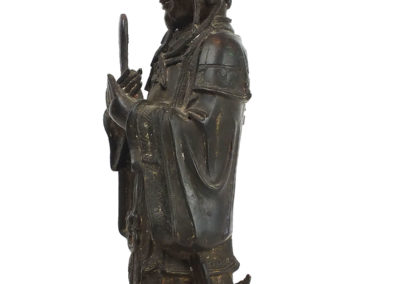 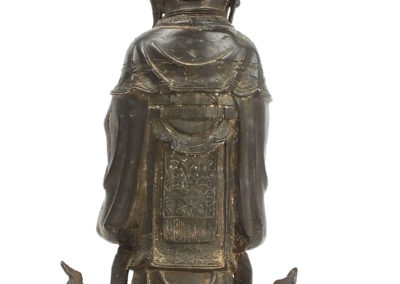 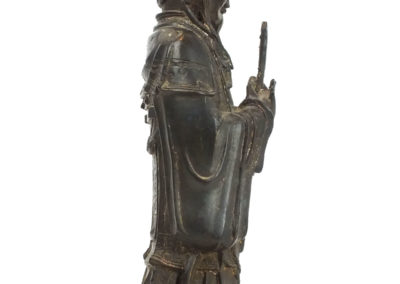 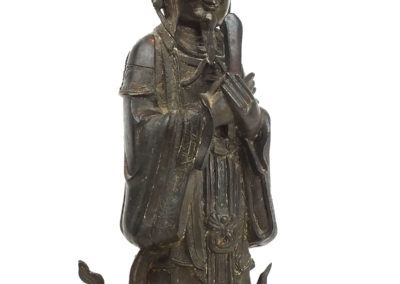 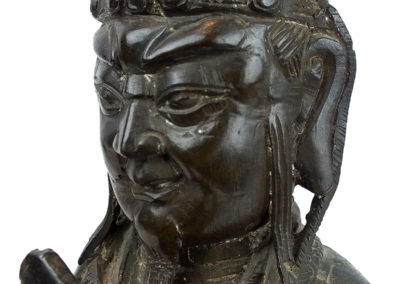 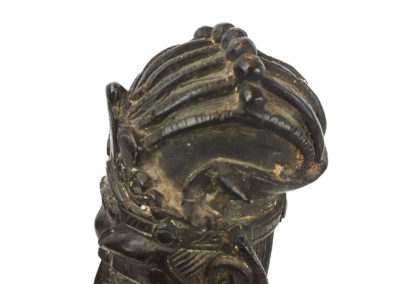 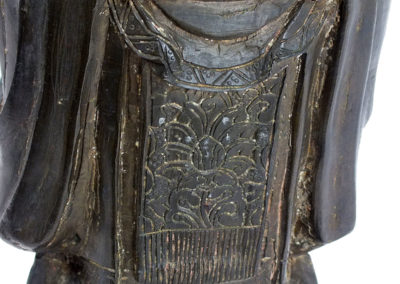 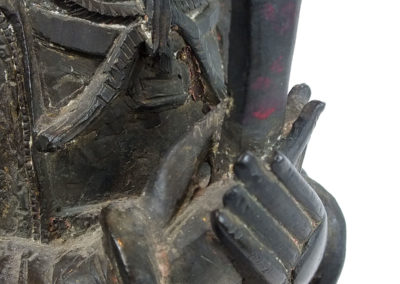 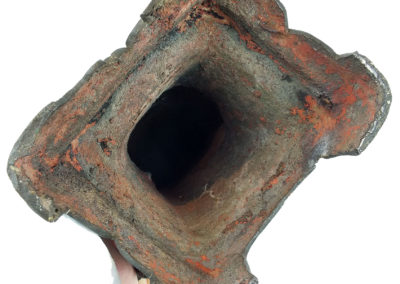 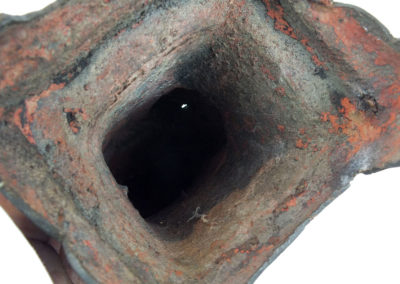 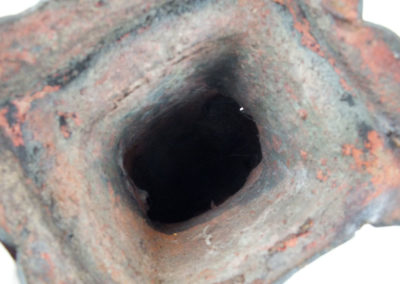 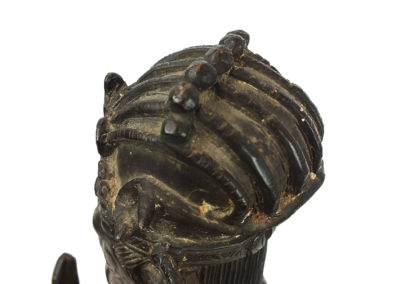 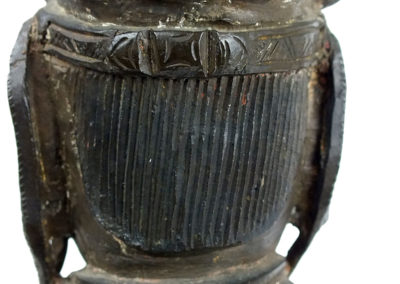 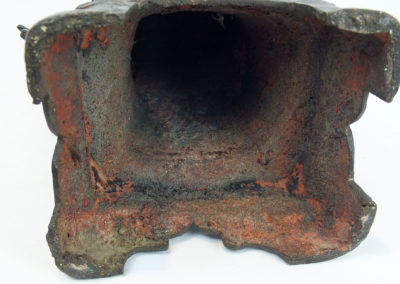 Large Bronze Figure Wenchang. The figure laying on a square section base with a wavy lower edge, dressed in a large robe, the hands joined to hold the hu tablet, on the head an exuberant headdress decorated on the front with stylized relief motifs.

A Large and Massive Bronze Figure of Wenchang

Wenchang is a Daoist divinity, protector of the arts and culture. Its usual attributes are the headdress in which appears the mountain with three peaks that was thought to house the immortals, flanked by the sun and the moon, the voluminous dress and, as in this statuette, the hu tablet, an instrument used in Chinese rituals since very ancient times.

Much of the mythology involves exciting stories full of fantastic people and beings, the use of magical powers, often taking place in an exotic mythological place or time. Like many mythologies, Chinese mythology has in the past been believed to be, at least in part, a factual recording of history. Along with Chinese folklore, Chinese mythology forms an important part of Chinese folk religion (Yang, An & Turner 2005, p. 4). Many stories regarding characters and events of the distant past have a double tradition: ones which present a more historicized or euhemerized version and ones which presents a more mythological version (Yang, An & Turner 2005, pp. 12–13)

Many myths involve the creation and cosmology of the universe and its deities and inhabitants. Some mythology involves creation myths, the origin of things, people and culture. Some involve the origin of the Chinese state. Some myths present a chronology of prehistoric times, many of these involve a culture hero who taught people how to build houses, or cook, or write, or was the ancestor of an ethnic group or dynastic family. Mythology is intimately related to ritual. Many myths are oral associations with ritual acts, such as dances, ceremonies, and sacrifices. 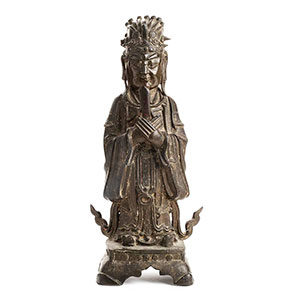