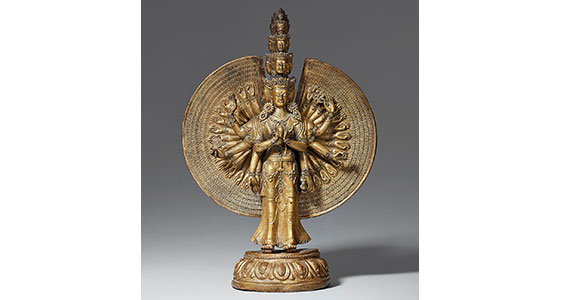 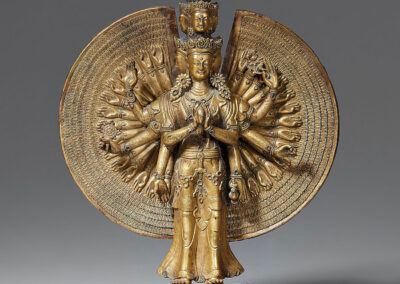 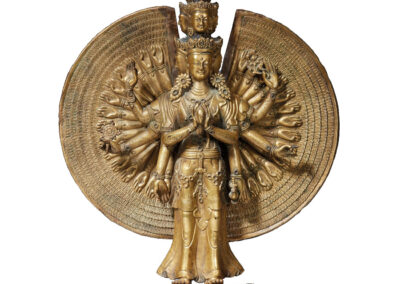 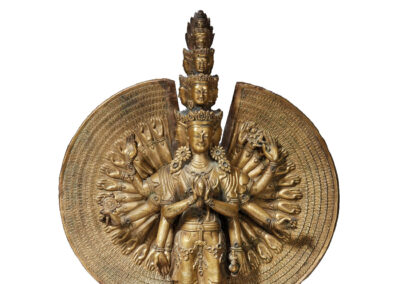 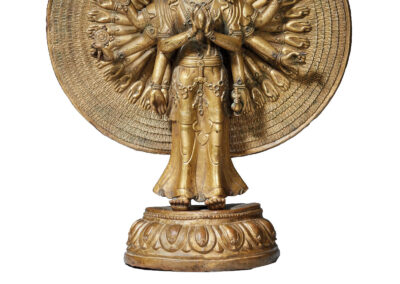 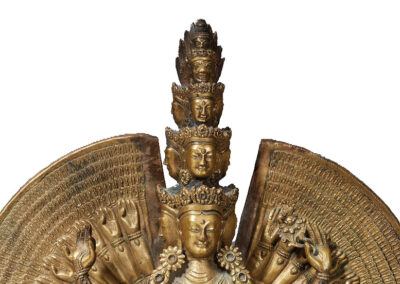 A Tibetochinese gilt bronze figure of the eleven-headed Avalokiteshvara . The eleven-headed bodhisattva of unbounded compassion with one thousand arms standing on a lotus base with his principle hands in front of his chest holding the wish-fulfilling jewel, in his radiating hands a mala, chakra, lotus blossom and water pot, and the multitude of other arms are outstretched around him, dressed in an antelope skin draped over the shoulders and an ankle-length dhoti clasped with a festooned belt and adorned with various jewellery

*Avalokiteśvara or Padmapani is a bodhisattva who embodies the compassion of all Buddhas. This bodhisattva is variably depicted, described and portrayed in different cultures as either male or female. In Tibet, he is known as Chenrezig. In Chinese Buddhism, Avalokiteśvara has evolved into the somewhat different female figure Guanyin, also known in Japan as Kanzeon or Kannon. In Nepal Mandal, this figure is known as Jana Baha Dyah, Karunamaya or Seto Machindranath.

The name Avalokiteśvara combines the verbal prefix ava “down”, lokita, a past participle of the verb lok “to notice, behold, observe”, here used in an active sense; and finally īśvara, “lord”, “ruler”, “sovereign” or “master”. In accordance with sandhi (Sanskrit rules of sound combination), a+īśvara becomes eśvara. Combined, the parts mean “lord who gazes down (at the world)”. The word loka (“world”) is absent from the name, but the phrase is implied. It does appear in the Cambodian form of the name, Lokesvarak.

The earliest translation of the name Avalokiteśvara into Chinese by authors such as Xuanzang was as Guānzìzài (Chinese: 觀自在), not the form used in East Asian Buddhism today, Guanyin (Chinese: 觀音). It was initially thought that this was due to a lack of fluency, as Guanyin indicates the original Sanskrit form was instead Avalokitasvara, “who looked down upon sound” (i.e., the cries of sentient beings who need help). It is now understood Avalokitasvara was the original form, and is also the origin of Guanyin “Perceiving sound, cries”. This translation was favored by the tendency of some Chinese translators, notably Kumārajīva, to use the variant 觀世音 Guānshìyīn “who perceives the world’s lamentations”—wherein lok was read as simultaneously meaning both “to look” and “world”.The original form Avalokitasvara appears in Sanskrit fragments of the fifth century.

This earlier Sanskrit name was supplanted by the form containing the ending -īśvara “lord”; but Avalokiteśvara does not occur in Sanskrit before the seventh century.

The original meaning of the name fits the Buddhist understanding of the role of a bodhisattva. The reinterpretation presenting him as an īśvara shows a strong influence of Hinduism, as the term īśvara was usually connected to the Hindu notion of Vishnu (in Vaishnavism) or Śiva (in Shaivism) as the Supreme Lord, Creator and Ruler of the world. Some attributes of such a god were transmitted to the bodhisattva, but the mainstream of those who venerated Avalokiteśvara upheld the Buddhist rejection of the doctrine of any creator god.

In Sanskrit, Avalokiteśvara is also referred to as Padmapāṇi (“Holder of the Lotus”) or Lokeśvara (“Lord of the World”). In Tibetan, Avalokiteśvara is Chenrézig, (Tibetan: སྤྱན་རས་གཟིགས་) and is said to emanate as the Dalai Lama, the Karmapa and other high lamas. An etymology of the Tibetan name Chenrézik is spyan “eye”, ras “continuity” and gzig “to look”. This gives the meaning of one who always looks upon all beings (with the eye of compassion). 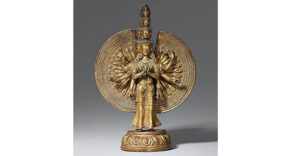 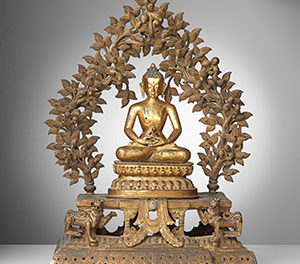 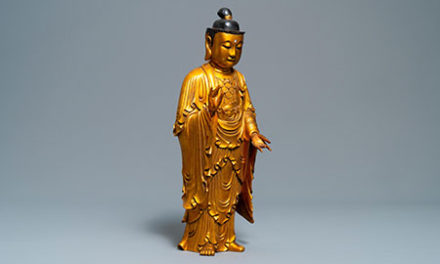 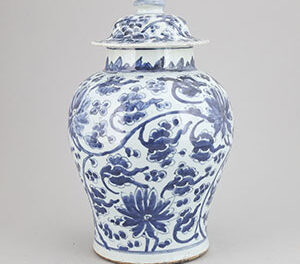 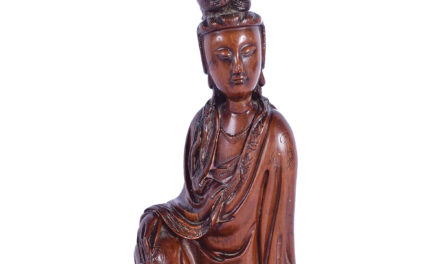