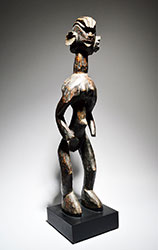 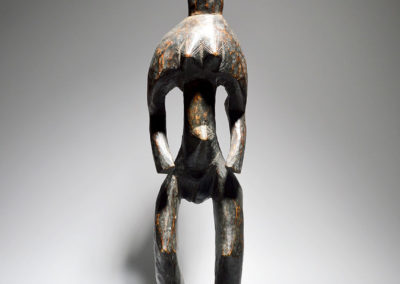 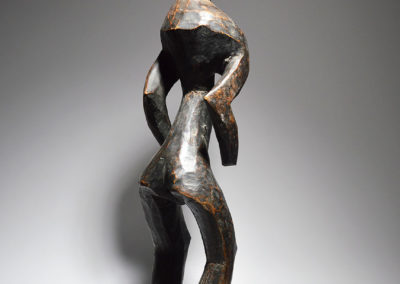 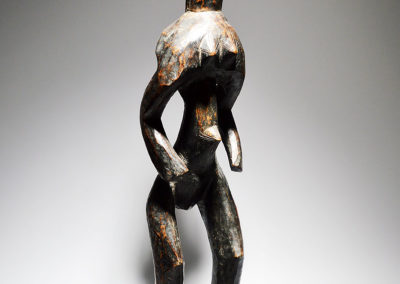 A Mumuye standing female figure, with a ribbed coiffure and with face and body scarifications,

* The Mumuyes are a people of Nigeria. They speak the Mumuye language. They constitute the largest tribal group in Taraba State of Nigeria and form the predominant tribes found in Zing, Yorro, Jalingo, Ardo-Kola, Lau, Gassol, Bali and Gashaka, all of which are local government areas of the state. Mumuyes are also widely found in many parts of the neighboring Adamawa State.

Until the 1970s most Mumuye sculpture was misattributed to their neighbors the Chamba. Their style is distinctive, assuming a long narrow pole-like style. They also use bush cow masks like those of their neighbors

The Mumuye were pushed into their current locale during the Fulani holy wars, which extended from the 17th century into the early 19th century. Along with their neighbors, with whom they have much in common, they fled southwards into the hills of eastern Nigeria where they divided into small communities that remained relatively isolated from one another. The Benue River Valley had very little to offer to Europeans in terms of natural resources, and so they remained relatively isolated from colonialist enterprise.

Mumuye are farmers, although the soil in this area is not exceptionally fertile. During the dry season from October to March nothing can be grown on the desolate scrub-like land. Millet is the staple crop in the region and is used to make flour and beer. The uncertainty of harvests in this region have led to the development of various prayers and offerings that are made during both planting and harvesting cycles in hopes of increasing the annual yield. Hunting is widely practiced to augment the local diet, and game is generally abundant. Each village has its own hunting lands, and permission is required for an outsider to hunt on these lands.

The totemic groups mentioned above are of primary importance in Mama religion, for a lineage’s membership in a certain group is defined by the group to which their ancestors belonged. Offerings and sacrifices are made to the family ancestors to appease them and to thank them, especially during harvest times. The dancing of bush cow masks is known to be a part of a secret society whose main purpose is to ask the ancestors who are associated with the bush cow for abundance and agricultural fertility. The skulls of ancestors are considered the resting place of their souls. Wooden statues that are carved to represent the dead are placed near the skull of the deceased person. It is believed that the spirit is then able to enter the statue which can be transported into the house where it is involved in the daily lives of the living.