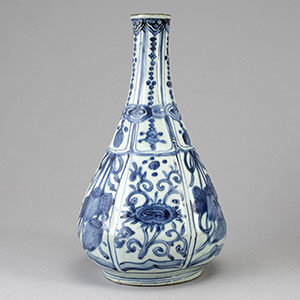 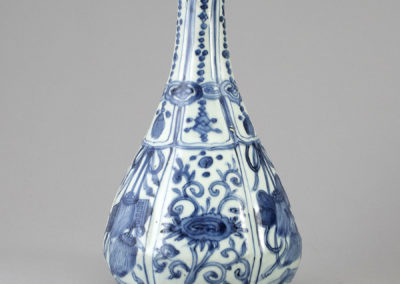 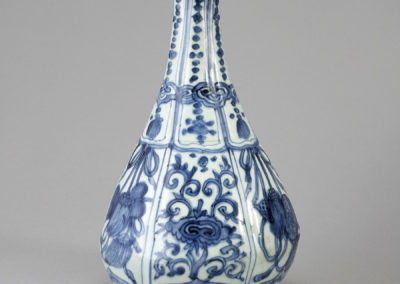 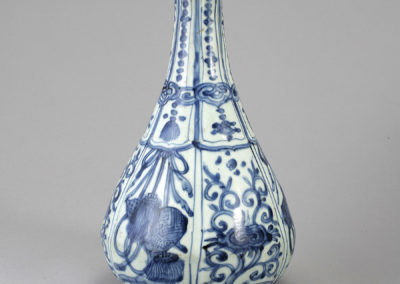 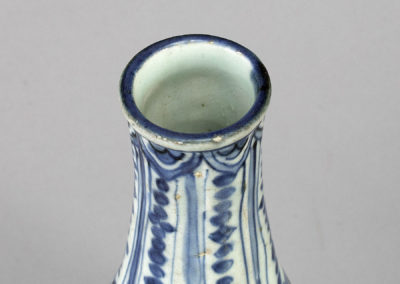 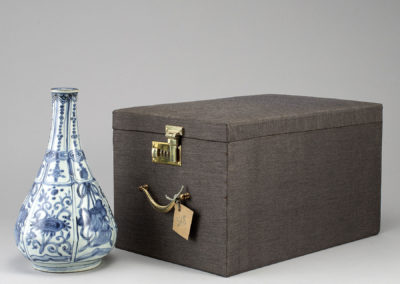 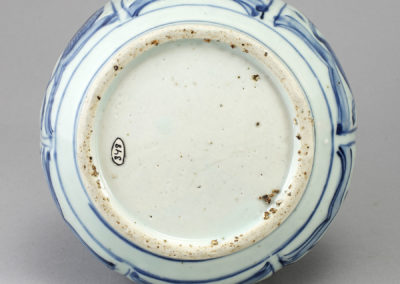 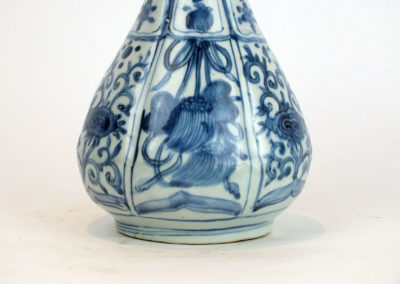 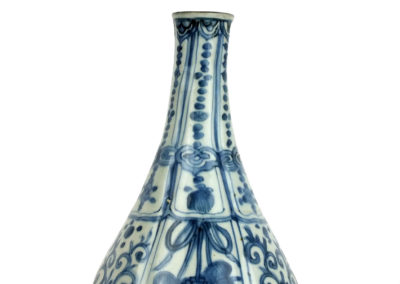 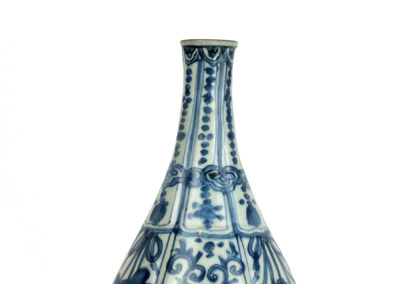 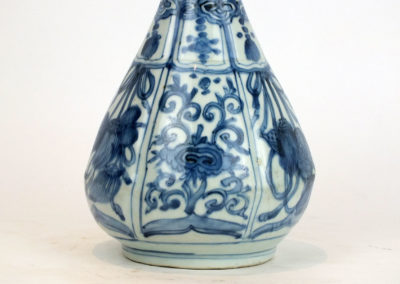 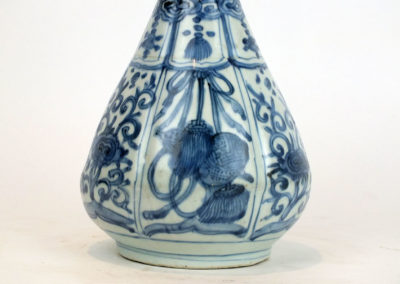 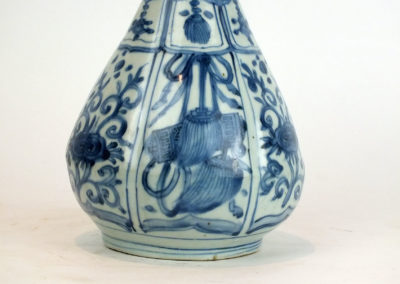 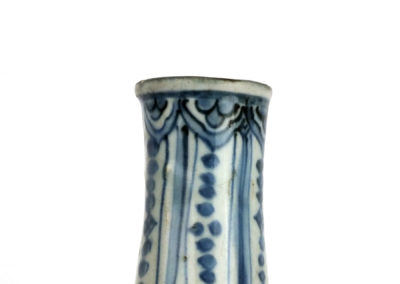 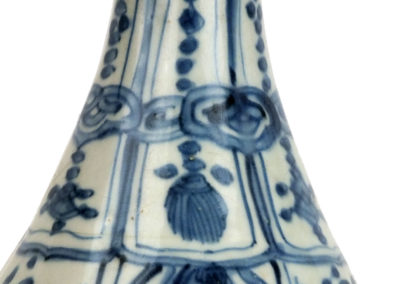 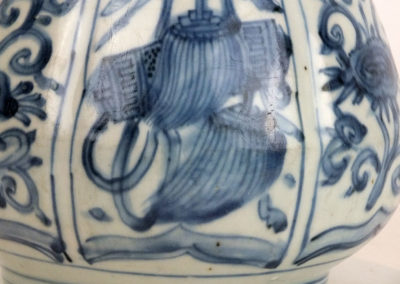 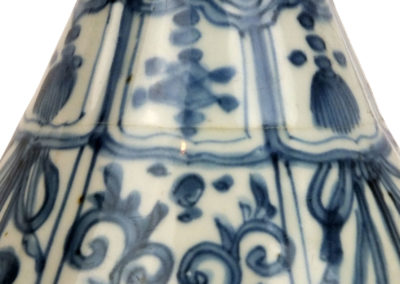 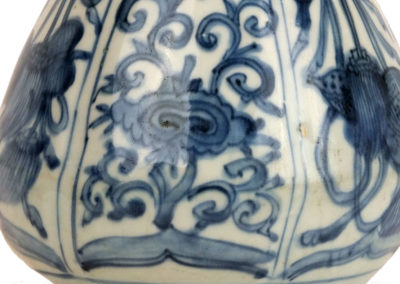 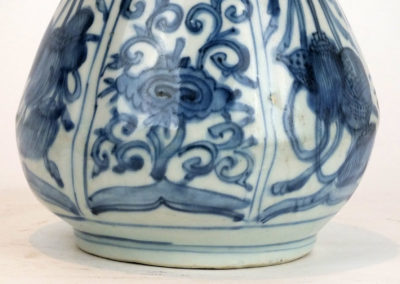 A Wanli Flask. Drop-shaped decorated with antiques and flowers within boarders.

A blue and white flask

*The Wanli Emperor (Chinese: 萬曆帝; pinyin: Wànlì Dì; 4 September 1563 – 18 August 1620), personal name Zhu Yijun (Chinese: 朱翊鈞; pinyin: Zhū Yìjūn), was the 14th Emperor of the Ming dynasty, reigned from 1572 to 1620. “Wanli”, the era name of his reign, literally means “ten thousand calendars”. He was the third son of the Longqing Emperor. His reign of 48 years (1572–1620) was the longest among all the Ming dynasty emperors[1] and it witnessed several successes in his early and middle reign, followed by the decline of the dynasty as the Emperor withdrew from his active role in government around 1600.

Zhu Yijun ascended the throne at the age of ten and adopted the regnal name “Wanli”, thus he is historically known as the Wanli Emperor. For the first ten years of his reign, he was aided by the Senior Grand Secretary (shǒufǔ), Zhang Juzheng, who governed the country as Yijun’s regent. During this period, the Wanli Emperor deeply respected Zhang as a mentor and a valued minister. Archery competitions, equestrianism and calligraphy were some of the pastimes of Wanli.

As Zhang Juzheng was appointed Minister of Ming dynasty in 1572, he launched a reform by the name of “abiding by ancestors’ rules”. He started from rectifying administration with a series of measures such as reducing redundant personnel and enhancing assessment of officials’ performance. This improved officials’ quality and efficiency of administration, and based on such facts he launched relevant reforms in the fields of land, finance, and military affairs. In essence, Zhang Juzheng’s reform was a rectification of social maladies without offending the established political and fiscal system of the Ming Dynasty. Although it did not eradicate political corruption and land annexation, it positively relieved social contradictions. More over, Zhang efficiently protected the dynasty from Japan, Jurchens and Mongols so he could save national defense expenditure. By the 1580s, Zhang stored an astronomical amount of silver, worth second only to 10 years of Ming’s total tax revenue. The first ten years of Wanli’s regime led to a renaissance, economically, culturally and militarily, an era known in China as Wanli’s renaissance (萬曆中興)).

During the first ten years of the Wanli era, the Ming dynasty’s economy and military power prospered in a way not seen since the Yongle Emperor and the Rule of Ren and Xuan from 1402 to 1435. After Zhang’s death, the Wanli Emperor felt free to act independently, and reversed many of Zhang’s administrative improvements. In 1584, the Wanli Emperor issued an edict confiscating all of Zhang’s personal wealth and purging his family members. Especially after 1586 when he had conflicts with vassals about his heir, Wanli decided to not hold the council for 20 years. The Ming dynasty’s decline began in the interim.

Complete the contact form below to request more information about: A Wanli Flask.