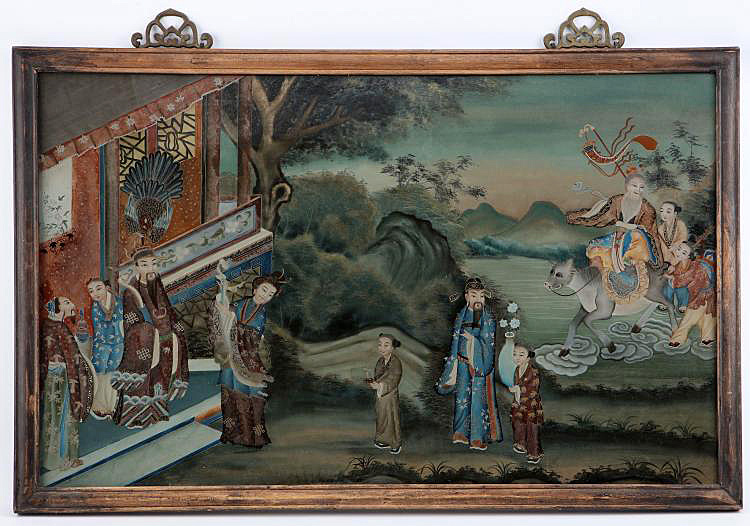 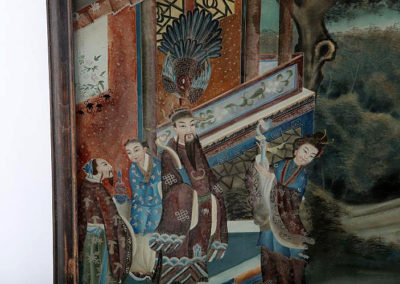 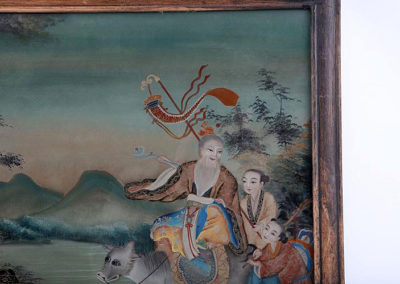 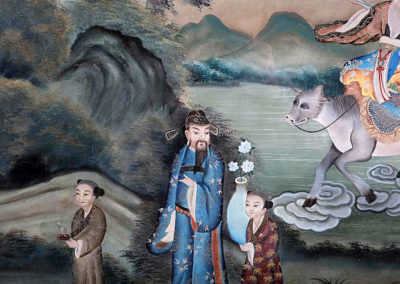 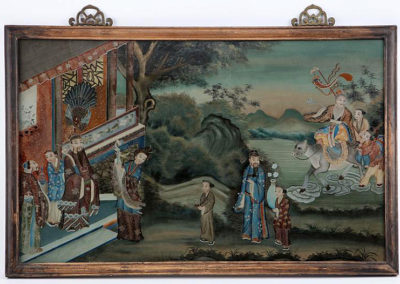 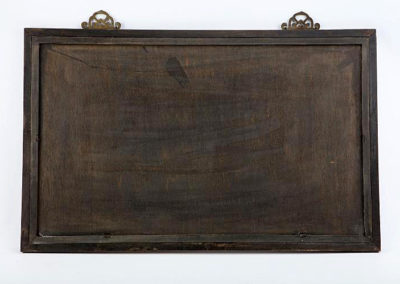 Reverse painting on glass is an art form consisting of applying paint to a piece of glass and then viewing the image by turning the glass over and looking through the glass at the image. Another term used to refer to the art of cold painting and gilding on the back of glass is verre églomisé, named after the French decorator Jean-Baptiste Glomy (1711–86), who framed prints using glass that had been reverse-painted. In German it is known as Hinterglasmalerei.

This art form has been around for many years. It was widely used for sacral paintings since Middle Ages. The most famous was the art of icons in the Byzantine Empire. Later the painting on glass spread to Italy where in Venice it influenced its Renaissance art. Since the middle of the 18th century, painting on glass became favored by the Church and the nobility throughout Central Europe. A number of clock faces were created using this technique in the early-to-mid-19th century. Throughout the 19th century painting on glass was widely popular as folk art in Austria, Bavaria, Moravia, Bohemia and Slovakia. Unfortunately, during the inter-war period (1914–1945) this traditional “naive” technique fell nearly to a complete oblivion and its methods of paint composition and structural layout had to be re-invented by combining acrylic and oil paints. Also the style of painting and especially the themes had to be varied and adjusted to new perceptions of the world in modern times. Thus painting on glass started to become popular again since the 1990s. However, many painters of this genre affirm that abandoning that unique tradition of naivist approach to painting on glass is rather difficult. Therefore, the painting on glass becomes a natural selection for refurbishing a new house built in a traditional rustic style. For example, the recently erected Catholic church at Radôstka in Northern Slovakia opted for having its Stations of the Cross on 14 large pictures – all painted on glass.

A contemporary example (21st century) would be the contemporary artist Gil Heitor Cortesão (b. 1967, Lisbon, Portugal) who has been developing a significant body of work consisting mainly of paintings on plexiglass and for smaller artworks, on glass. His works are now part of many public and private institutions, in Europe such as  in Portugal, or  in Luxembourg, just to name few. His artworks have been exhibited internationally by several contemporary art galleries such as Carbon 12, and Pedro Cera.

The painting can be realistic or abstract. Realistic reverse paintings are more challenging to create as one must, for example, in painting a face, to put the pupil of an eye on the glass before the iris, exactly the opposite of normal painting. If this is neglected the artist will not be able to correct the error as they will not get in between the glass and the paint already applied. No such care need be taken with the abstract form, but with this form there is not a good idea how the piece will look like until it is finished. This process is not like stained or leaded glass work in that it is not intended to hang in a window with light coming through the piece. Hanging on a wall, framed or unframed, with a lot of light directed towards the piece provides best viewing. 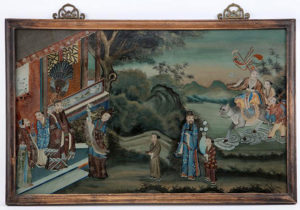