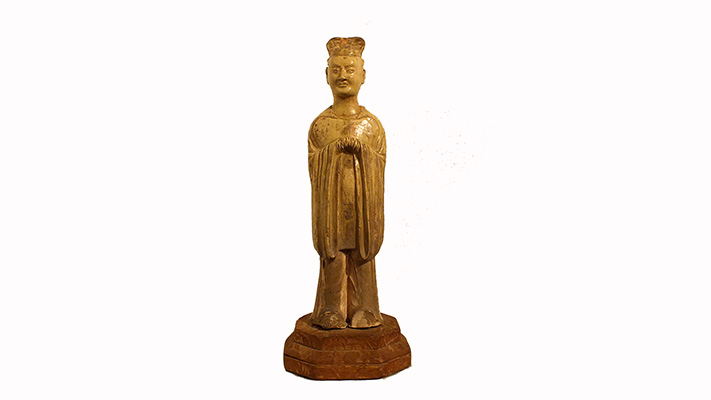 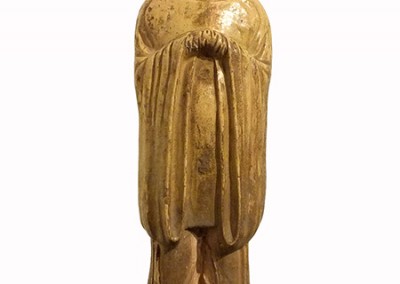 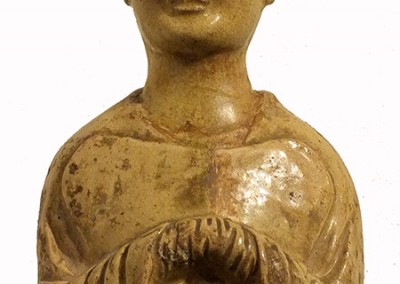 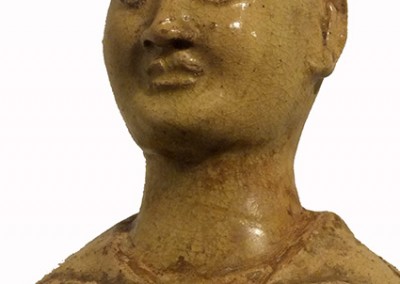 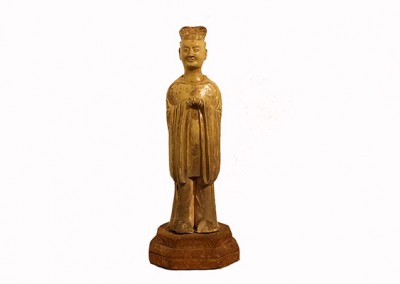 Rare Straw-Glazed Official, shown standing on a nice wooden base with hands clasped in front to hold a hu tablet, wearing an official’s cap, a breastplate strapped over his full-sleeved tunic and a long under-robe that falls to the tops of the fan-toed shoes, his face finely modelled with elegant features, in yellowish-green-tinged straw glaze.

־ A similar straw-glazed figure of an official was excavated from the tomb of the Tang military commander Zheng Rentai buried in 664 AD, a satellite tomb for the mausoleum of the Tang emperor Taizong. In similar fashion, this figure wears the long sleeves of a court official with his hands folded in deference and the jingdeguan or bureaucrat’s hat. See Jams C.Y. Watt et al., China: Down of a Golden Age, 200-750 AD, New York, 2004, pp. 229-3, no. 184.

* Reference: Arthur Aronsohn was a Dutch civil engineer. Aronsohn studied civil engineering at the Technical University in Delft and started working after graduating as a consulting engineer. In 1927 he established himself as an independent consulting engineer with an own engineering company in Rotterdam that to this day still exists under the name Aronsohn consulting engineers. In 1925 he allowed himself to become Dutch naturalized. In the thirties Aronsohn was involved as a consultant to many major expansion projects in Rotterdam, such as the construction of the Atlantic House, the Academy of Fine Arts and Applied Sciences, the residential building on the Ungerplein and St. Francis Hospital. He often gave advice on the use of reinforced concrete but was also involved in buildings with steel structures like skeleton, such as the residential tower ir. W. van Tije to the Parklaan in Rotterdam. After World War II there was a lot of work through the necessary reconstruction of Rotterdam and was Aronsohn his office involved in several major projects such as department stores, the Central Station, the station post office, the Rhine Hotel, De Doelen, the parking garage under the Schouwburgplein, the Medical Faculty , the School of Economics, the Willemswerf, the Weena Tower and the Sophia Children’s Hospital. It was also his office involved in the rehabilitation and expansion of shipyards, factories and buildings in the ports. Today, the agency is engaged in the construction of head offices of large companies such as ING, Nationale Nederlanden, ABN Amro, teaching hospitals, etc. Aronsohn was one of the initiators of the creation of the Building Centre in Rotterdam and was for many years editor of the magazine Building. 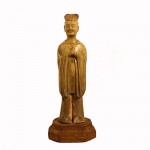