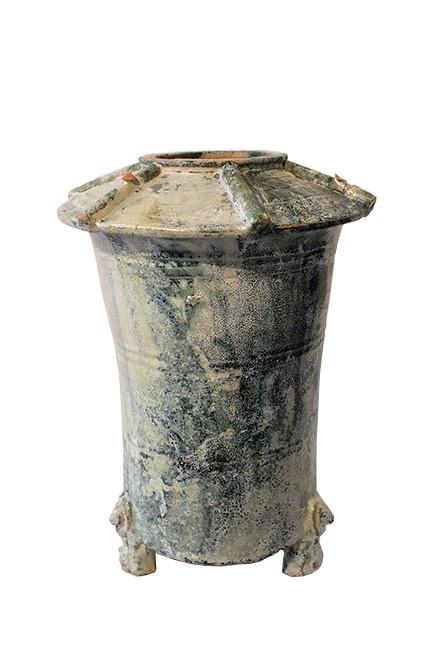 Han Dynasty Granary Jar. This vessel seems to be a partial representation of actual granaries constructed during Han times.

The mouth at the top of the vessel and the moulded bear feet suggest that this basic form hand been adapted to more practical use a ritual container.

Three sets of grooves are carved around the sides. The flaring roof has four short hip ridges.

The base of the jar and the lower pats of the three bear feet are unglazed.

The glaze has acquired a full, silver iridescence.

* After the civil war that followed the death of Qin Shihuangdi in 210 B.C., China was reunited under the rule of the Han dynasty, which is divided into two major periods: the Western or Former Han (206 B.C.–9 A.D.) and the Eastern or Later Han (25–220 A.D.). The boundaries established by the Qin and maintained by the Han have more or less defined the nation of China up to the present day. The Western Han capital, Chang’an in present-day Shaanxi Province—a monumental urban center laid out on a north-south axis with palaces, residential wards, and two bustling market areas—was one of the two largest cities in the ancient world (Rome was the other).

China was reunited under the rule of the Han dynasty.

Poetry, literature, and philosophy flourished during the reign of Emperor Wudi (141–86 B.C.). The monumental Shiji (Historical Records) written by Sima Qian (145–80 B.C.) set the standard for later government-sponsored histories. Among many other things, it recorded information about the various peoples, invariably described as “barbarian,” who lived on the empire’s borders. Wudi also established Confucianism as the basis for correct official and individual conduct and for the educational curriculum. The reliance of the bureaucracy on members of a highly educated class grounded in Confucian writings and other classics defined China’s statecraft for many centuries.

Under Wudi, China regained control of territories, first conquered by Qin Shihuangdi, in southern China and the northern part of Vietnam. New commanderies were established in Korea, and contacts were made with the western regions of Central Asia. The conquest of Ferghana and neighboring regions in 101 B.C., which allowed the Han to seize a large number of the “heavenly” long-legged horses valued for cavalry maneuvers, also gave China control of the trade routes running north and south of the Taklamakan Desert. In return for its silk and gold, China received wine, spices, woolen fabrics, grapes, pomegranates, sesame, broad beans, and alfafa.

Disputes among factions, including the families of imperial consorts, contributed to the dissolution of the Western Han empire. A generation later, China flourished again under the Eastern Han dynasty (25–220 A.D.), which ruled from Luoyang, a new capital farther east in present-day Henan Province. Organized around a north-south axis and covering an area of approximately four square miles, the city was dominated by two enormous palace complexes, each 125 acres and linked by a covered pathway. Ban Chao (32–102 A.D.), a member of an illustrious literary family, reasserted Chinese control of Central Asia from 73 to 94 A.D. Trade, less rigorously controlled than in the first part of the dynasty, expanded, with caravans reaching Luoyang every month.

There was also an expansion of diplomacy: fifty envoys from Central Asia were recorded in 94 A.D., and Japanese envoys visited in 57 and 107 A.D. Jugglers from West Asia arrived in 122 A.D., and the reported arrival of an emissary from Andun (the emperor Marcus Aurelius Antoninus) bringing ivory, rhinoceros horn, and tortoiseshell suggests a direct link to Rome in 166 A.D. The development of paper, water clocks, sundials, astronomical instruments, and the invention of a seismograph in 132 A.D. attest to the technological and scientific sophistication that marks this period.

* Department of Asian Art, The Metropolitan Museum of Art