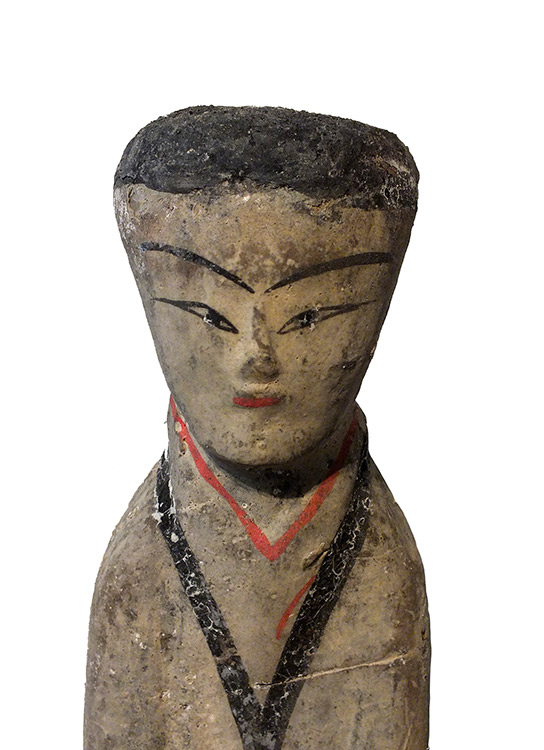 With the original colours

Pottery Female Attendant, slim figure wearing fitted layered robe and painted in black pigment with characters possibly indicating her position, the long hair tied back and the face modelled with delicate features, with traces of red, white and black pigment

China’s first imperial dynasty was the Qin dynasty (221–206 BC). The Qin unified the Chinese Warring States by conquest, but their empire became unstable after the death of the first emperor Qin Shi Huangdi. Within four years, the dynasty’s authority had collapsed in the face of rebellion.[7] Two former rebel leaders, Xiang Yu (d. 202 BC) of Chu and Liu Bang (d. 195 BC) of Han, engaged in a war to decide who would become hegemon of China, which had fissured into 18 kingdoms, each claiming allegiance to either Xiang Yu or Liu Bang.[8] Although Xiang Yu proved to be a capable commander, Liu Bang defeated him at Battle of Gaixia (202 BC), in modern-day Anhui. Liu Bang assumed the title “emperor” (huangdi) at the urging of his followers and is known posthumously as Emperor Gaozu (r. 202–195 BC).[9] Chang’an was chosen as the new capital of the reunified empire under Han.[10]

A silk banner from Mawangdui, Changsha, Hunan province. It was draped over the coffin of Lady Dai (d. 168 BC), wife of the Marquess Li Cang (利蒼) (d. 186 BC), chancellor for the Kingdom of Changsha.[11]

At the beginning of the Western Han dynasty, thirteen centrally controlled commanderies — including the capital region—existed in the western third of the empire, while the eastern two-thirds were divided into ten semi-autonomous kingdoms.[12] To placate his prominent commanders from the war with Chu, Emperor Gaozu enfeoffed some of them as kings. By 157 BC, the Han court had replaced all of these kings with royal Liu family members, since the loyalty of non-relatives to the throne was questioned.[12] After several insurrections by Han kings—the largest being the Rebellion of the Seven States in 154 BC—the imperial court enacted a series of reforms beginning in 145 BC limiting the size and power of these kingdoms and dividing their former territories into new centrally controlled commanderies.[13] Kings were no longer able to appoint their own staff; this duty was assumed by the imperial court.[14] Kings became nominal heads of their fiefs and collected a portion of tax revenues as their personal incomes.[14]The kingdoms were never entirely abolished and existed throughout the remainder of Western and Eastern