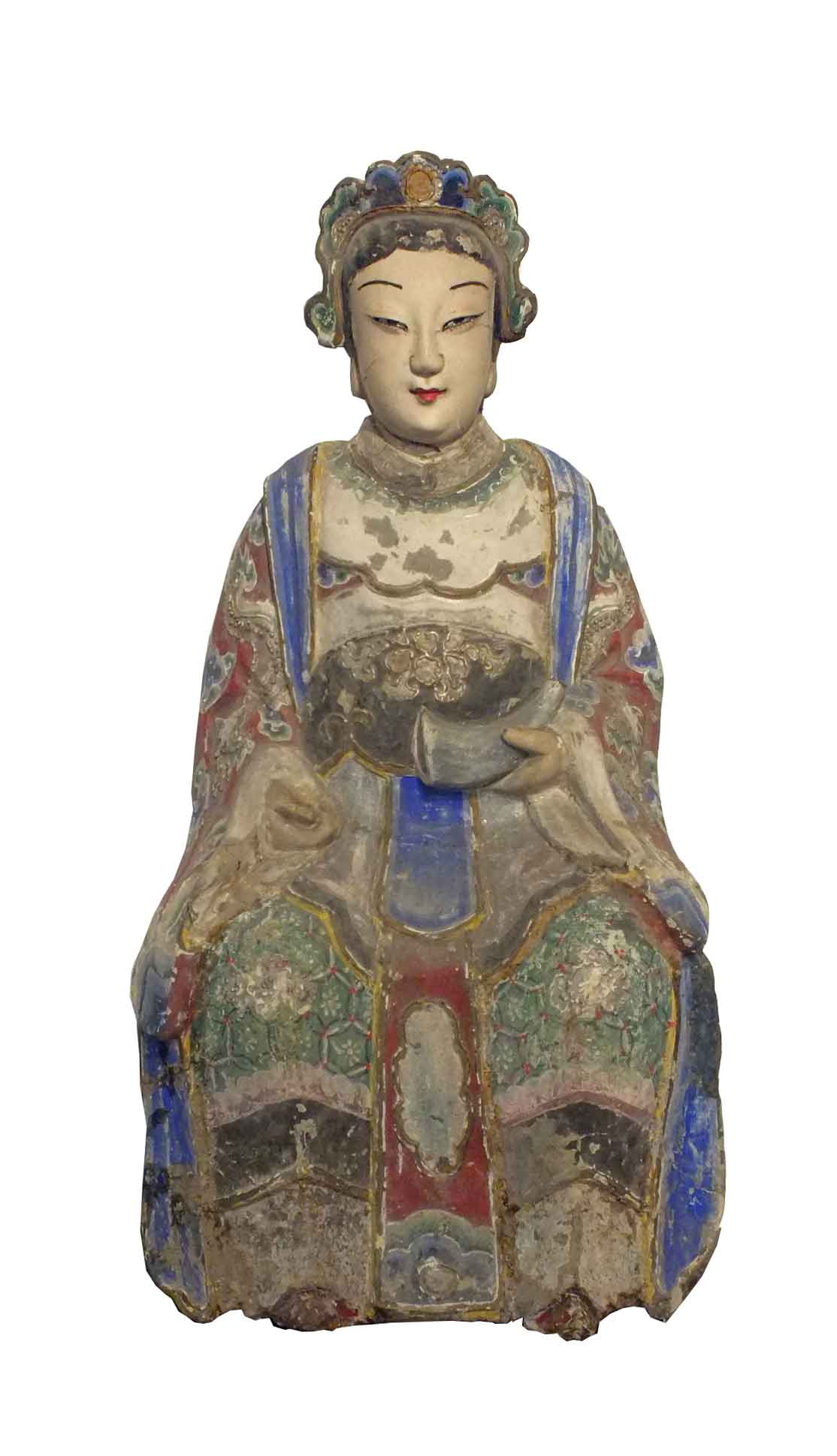 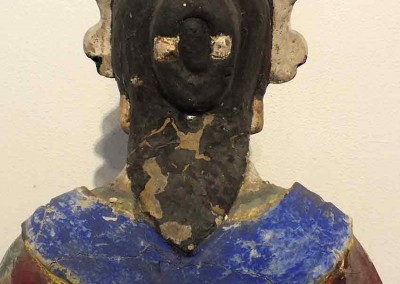 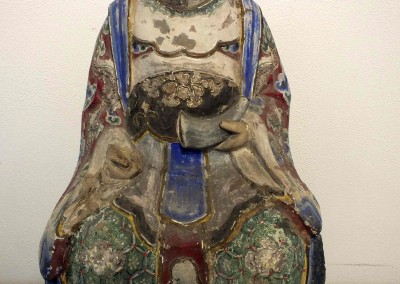 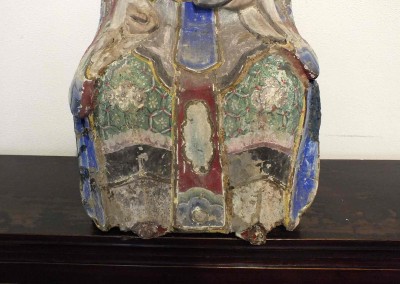 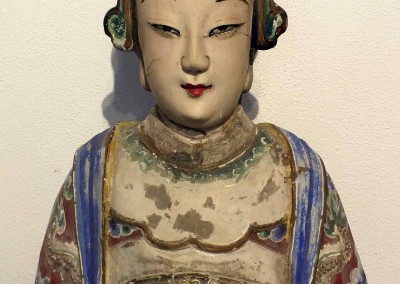 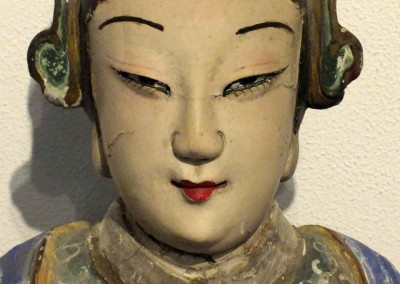 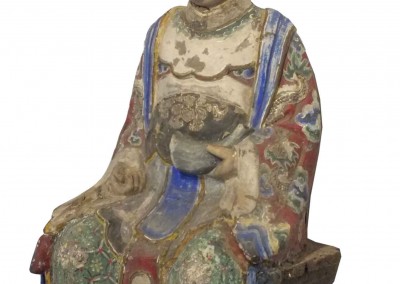 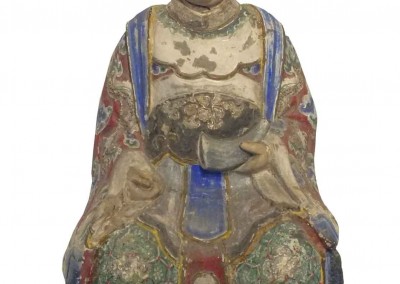 Large Chinese Goddess Mazu, a nice painted Stucco figure of a Chinese Goddess of the sea Mazu, the figure shown seated in European fashion on a wooden throne wearing elaborately embroidered multi-layered robes with long sleeves draped over the shoulders and falling in folds over the knees above the pointed shoes, the long sash  and elaborately knotted ribbons tied at the chest and suspended to the feet, the left hand holding a tablet and the right a ball, the face with a serene smiling expression, with traces of white, red, blue, green and orange pigment.

* According to legend, the Daoist goddess Mazu was originally a girl named Lin Moniang whose short life was filled with miracles and wonders.

Lin Moniang’s story begins in the year 960 during the Song dynasty in Fujian province. Lin’s parents lived on the island of Meizhou on the Taiwan Strait. Although her parents already had five boys, her mother wanted to have a daughter so badly. After praying to Guan Yin, the goddess of mercy, Lin’s mother saw her in a dream. Guan Yin offered her a flower and instructed her to eat it. Soon after, Lin’s mother became pregnant and gave birth to Lin Niang.

The story goes on to say that when Lin was born, the room was filled with light and the scent of flowers. Because the child did not cry even once during her first month, her parents gave her an additional name, “Mo,” meaning quiet.

Lin Moniang was an extraordinary child, who was born with supernatural powers. She knew in advance that something was going to happen; she could describe places she has never visited; she even had the power of healing. She started studying Buddhist and Daoist secrets when she was only ten years old. She was like a shaman, working as a healer and a seer at the same time. When she became a teenager, she was able to predict the weather, saving many sailors’ lives by warning them about approaching storms before their boats reached the open sea.

Lin was so dedicated to being of service to other people that she rejected all the suitors who asked for her hand in marriage. She had to dissuade two generals, Qian Liyan and Shun Feng’er, who had become so attached to her by challenging them to a fight. Because she had studied under Daoist masters, Lin also knew kung-fu, so the generals didn’t necessarily have an unfair advantage. Qian and Shun accepted the challenge and fought to their deaths. Lin went on with her life, protecting seafarers and saving people from drowning.

When she turned 28, Lin told her parents that it was time for her to move on from this world. She went to the top of the mountains and disappeared in the mist, at about the same time that a rainbow appeared. People interpreted this to mean that Lin was a boddhisatva, a Buddhist god who lived among men to help them in times of trouble. Many seafarers over the course of the centuries have told of seeing a woman in a red dress or surrounded by light who appears in the middle of the sea to warn the voyagers of an approaching storm.

Lin became known as Mazu, mother goddess. She is also called A-Ma, Tianhou, Daughter of the Dragon and Empress of the Heavens. Statues depicting Mazu usually also show the two generals Qian and Shun in recognition of their eternal love and devotion for Lin Moniang.

The people believe that the goddess Mazu will always come to their aid when her name is called. In an emergency, it’s better to call for Mazu, because calling on the Empress of the Heavens, polite though it may be, might mean that she can’t come and help right away. An empress, after all, has to first dress in her best clothes before appearing to an audience.

Mazu’s feast day is celebrated on her birthday, the 23rd day of the third lunar month. There are about 1,500 temples dedicated to her all over the world, and the most sacred of them is her temple in Taiwan, called Zhenlan Guan. 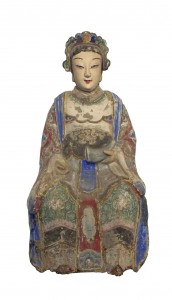