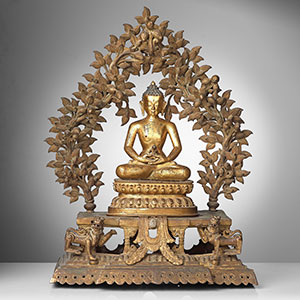 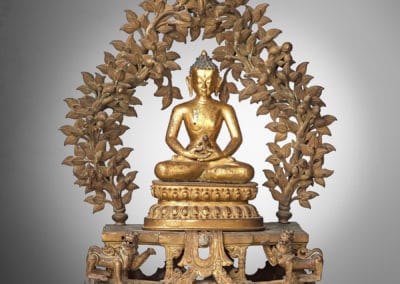 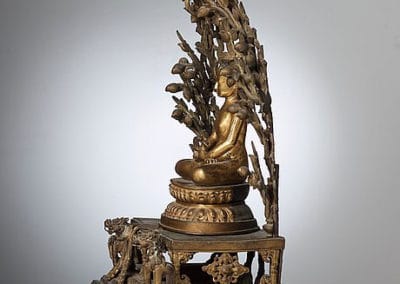 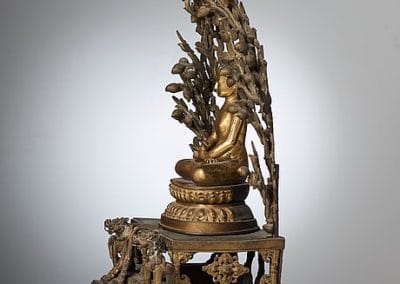 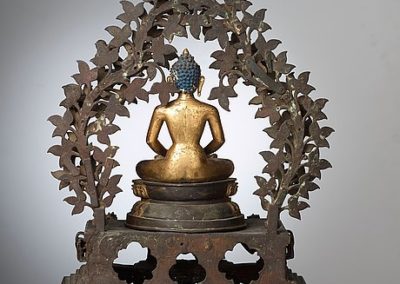 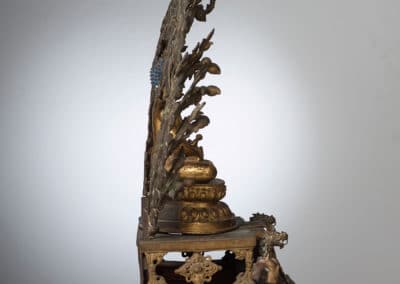 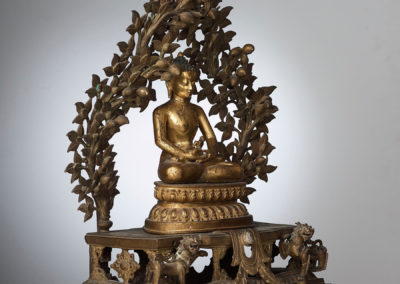 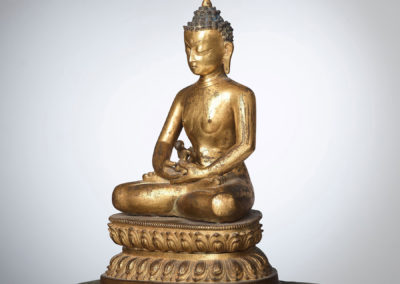 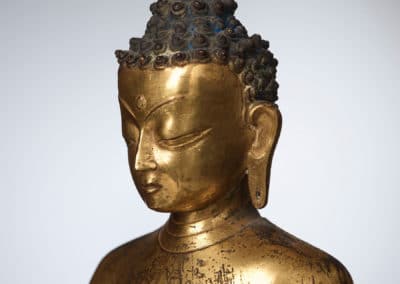 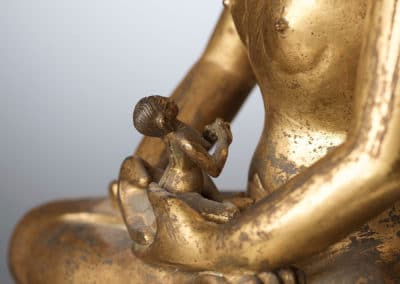 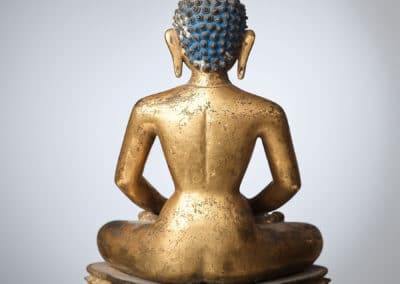 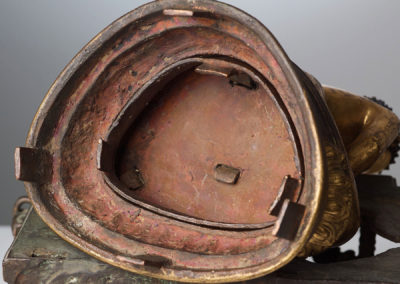 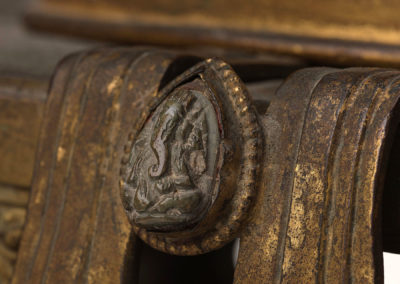 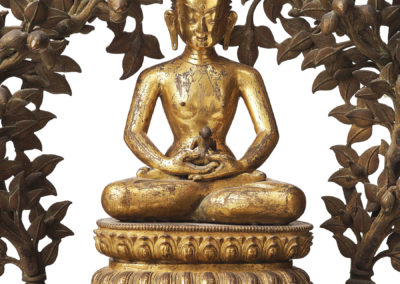 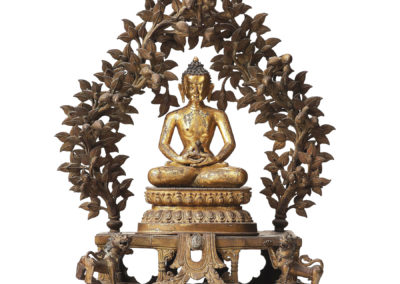 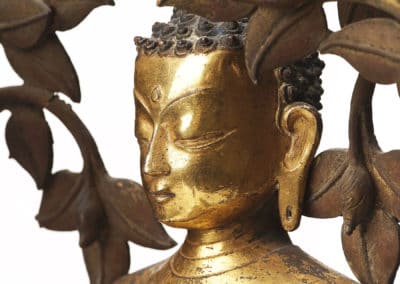 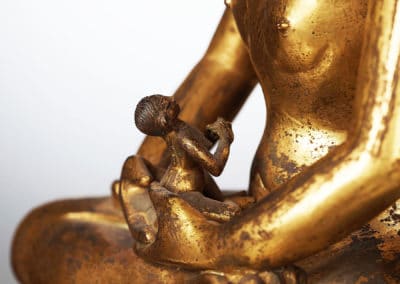 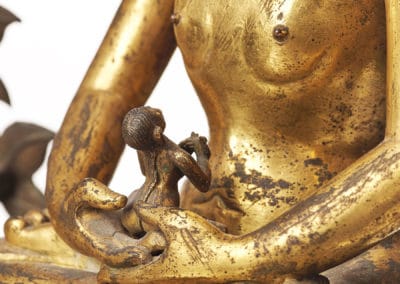 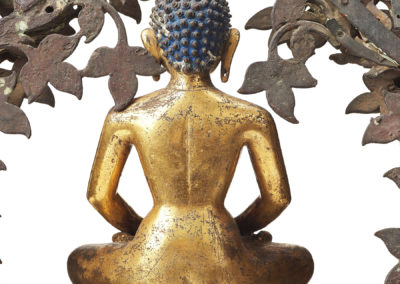 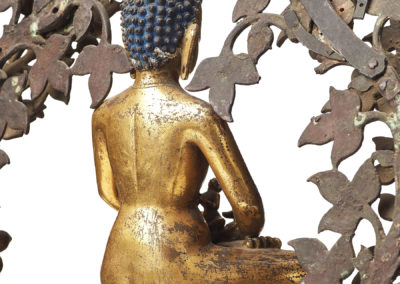 Monumental Gilt Bronze Buddha. The buddha is shown seated in a meditative pose, eyes cast down on a high double lotus throne. The figure is cantered on a large raised throne flanked by two Buddhist lions. To the centre a carved image of Ganesha. The mandorla is three dimensional and has traces of being gilded as well.

Acquired from the above by present owner

Wear. Parasol and sculptures to the sides are missing.

*Buddhism in Nepal started spreading since the reign of Ashoka through Indian and Tibetan missionaries. The Kiratas were the first people in Nepal who embraced Gautama Buddha’s teachings, followed by the Licchavis and Newars. Buddha was born in Lumbini in the Shakya Kingdom. Lumbini is considered to lie in present-day Rupandehi district, Lumbini zone of Nepal. Buddhism is the second-largest religion in Nepal. According to 2001 census, 10.74% of Nepal’s population practiced Buddhism, consisting mainly of Tibeto-Burman-speaking ethnicities, the Newar. However, in the 2011 census, the Buddhist population in Nepal was just 9% of the country population.[5] It has not been possible to assign with certainty the year in which Prince Siddhartha, the birth name of the Buddha, was born, it is usually placed at around 563 BCE.[6] In Nepal’s hill and mountain regions Hinduism has absorbed Buddhist tenets to such an extent that in many cases they have shared deities as well as temples. For instance, the Muktinath Temple is sacred and a common house of worship for both Hindus and Buddhists.

The Malla dynasty saw to the golden period of the syncretism of Hindu and Buddhist art forms by the Newar. The Paubha, the Newar counterpart of the Tibetan Buddhist Thangka, flourished in this period.

During the reign of Jayasthiti Malla, after implementation of Manudharmasastra, celibate monks were banned from practicing in Nepal.[citation needed] This gave way to the decelibate Newar Buddhism. Because of this, Theravada Buddhism was lost in Nepal only to be revitalized in the beginning of the 20th century.[9]

The Shah dynasty saw the decline of Buddhism in Nepal where it eventually merged with Hinduism as the Hindu Gurkha rose to prominence.[citation needed] In the north, the Mustang kingdom ruled by the Buddhist Lopa and the Thakali saw to the flourishing of Vajrayana (Tibetan Buddhism) in the North.[citation needed] 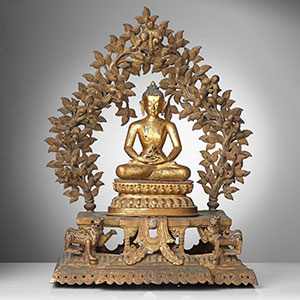