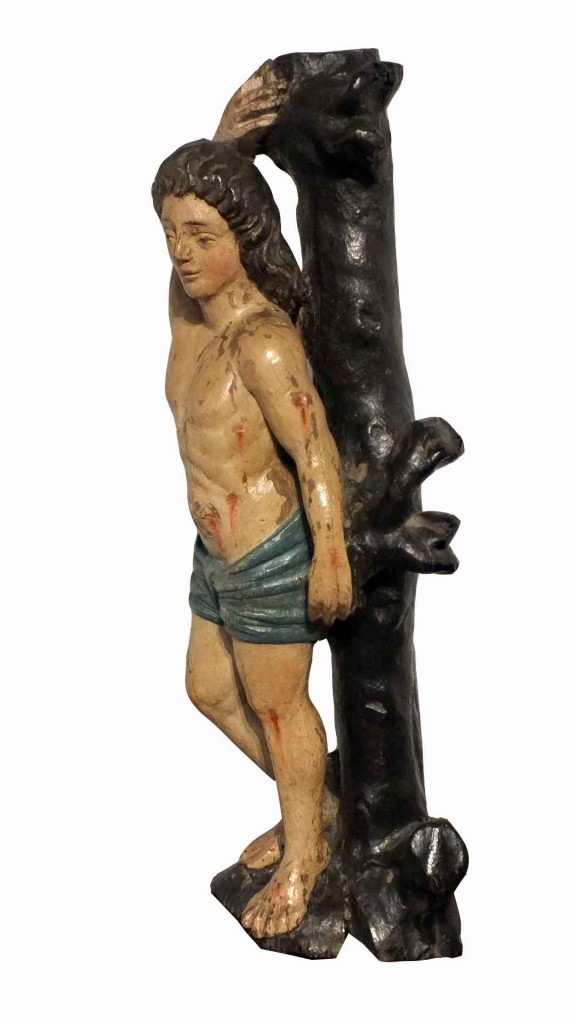 * Saint Sebastian (died c. 288) was an early Christian saint and martyr. It is said that he was killed during the Roman emperor Diocletian’s persecution of Christians. He is commonly depicted in art and literature tied to a post or tree and shot with arrows. This is the most common artistic depiction of Sebastian; however, according to legend, he was rescued and healed by Irene of Rome. Shortly afterwards he criticized Diocletian in person and as a result was clubbed to death.[1] He is venerated in the Catholic and Orthodox Churches.

The details of Saint Sebastian’s martyrdom were first spoken of by 4th-century bishop Ambrose of Milan (Saint Ambrose), in his sermon (number 22) on Psalm 118. Ambrose stated that Sebastian came from Milan and that he was already venerated there at that time. Saint Sebastian is a popular male saint, especially among soldiers and athletes, who often wear his medal as a pious sacramental. He is commonly known as the “Patron Saint of Sports.[2][3][4]

According to Sebastian’s 18th-century entry in Acta Sanctorum,[6] still attributed to Ambrose by the 17th-century hagiographer Jean Bolland, and the briefer account in the 14th-century Legenda Aurea, he was a man of Gallia Narbonensis who was taught in Milan and appointed a captain of the Praetorian Guard under Diocletian and Maximian, who were unaware that he was a Christian.

According to tradition, Mark and Marcellian were twin brothers and were deacons. They were from a distinguished family and were both married, living in Rome with their wives and children. The brothers refused to sacrifice to the Roman gods and were arrested. They were visited by their father and mother, Tranquillinus and Martia, in prison, who attempted to persuade them to renounce Christianity.

Sebastian ended up converting Tranquillinus and Martia, as well as Saint Tiburtius, the son of Chromatius, the local prefect. Nicostratus, another official, and his wife Zoe were also converted. It has been said that Zoe had been a mute for six years; however, she made known to Sebastian her desire to be converted to Christianity. As soon as she had, her speech returned to her. Nicostratus then brought the rest of the prisoners; these 16 persons were also converted by Sebastian.[7]
Chromatius and Tiburtius converted; Chromatius set all of his prisoners free from jail, resigned his position, and retired to the country in Campania. Mark and Marcellian, after being concealed by a Christian named Castulus, were later martyred, as were Nicostratus, Zoe, and Tiburtius.

Diocletian reproached Sebastian for his supposed betrayal, and he commanded him to be led to a field and there to be bound to a stake to be shot at. “And the archers shot at him till he was as full of arrows as an urchin,”[9] leaving him there for dead. Miraculously, the arrows did not kill him. The widow of Castulus, Irene of Rome, went to retrieve his body to bury it, and found he was still alive. She brought him back to her house and nursed him back to health. The other residents of the house doubted he was a Christian. One of those was a girl who was blind. Sebastian asked her “Do you wish to be with God?”, and made the sign of the Cross on her head. “Yes”, she replied, and immediately regained her sight.[citation needed] Sebastian then stood on a step and harangued Diocletian as he passed by; the emperor had him beaten to death and his body thrown into a privy. But in an apparition Sebastian told a Christian widow where they might find his body undefiled and bury it “at the catacombs by the apostles.”[citation needed] Sometimes Sebastian is known as the saint who was martyred twice.

Of the miraculous effect of the example of Sebastian, the Golden Legend reports,

… Saint Gregory telleth in the first book of his Dialogues that a woman of Tuscany which was new wedded was prayed for to go with other women to the dedication of the church of Sebastian, and the night tofore she was so moved in her flesh that she might not abstain from her husband, and on the morn, she having greater shame of men than of God, went thither, and anon as she was entered into the oratory where the relics of Saint Sebastian were, the fiend took her and tormented her before all the people.

Sebastian was also said to be a defense against the plague. The Golden Legend transmits the episode of a great plague that afflicted the Lombards in the time of “King Gumburt”, which was stopped by the erection of an altar in honor of Sebastian in the Church of Saint Peter in the Province of Pavia.