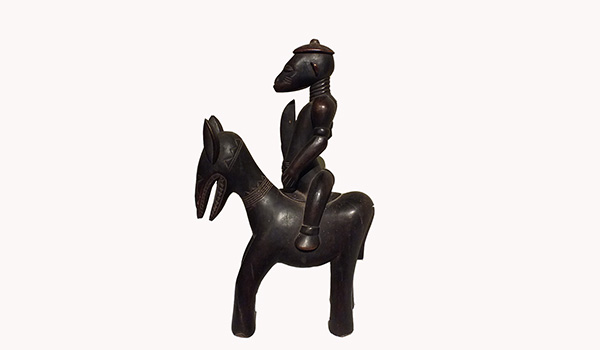 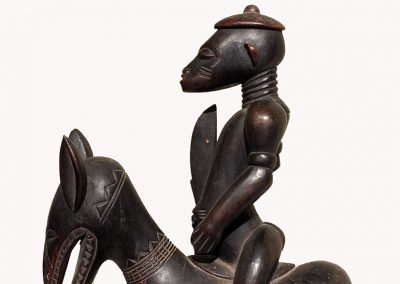 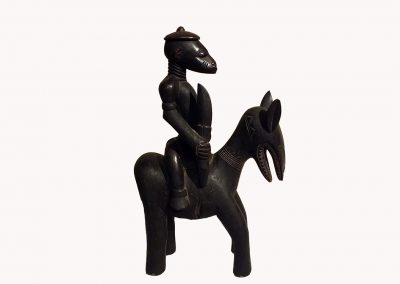 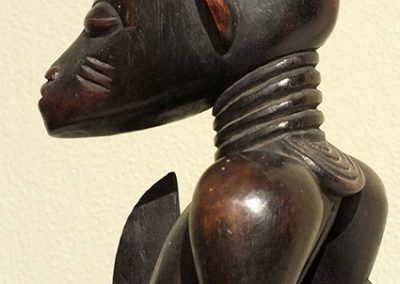 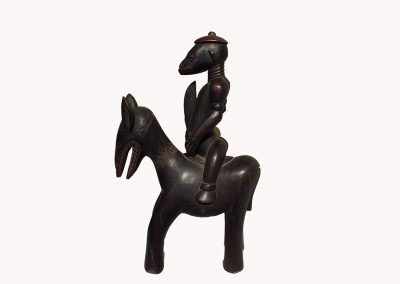 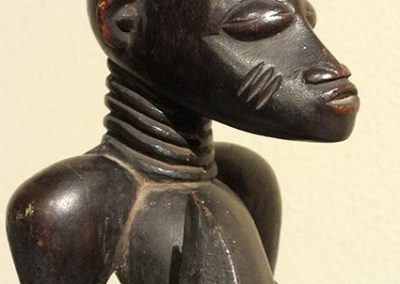 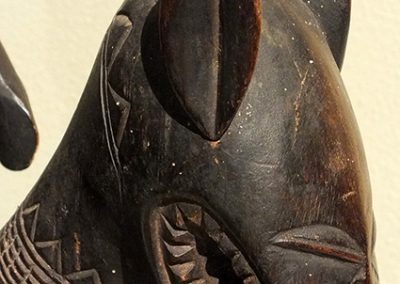 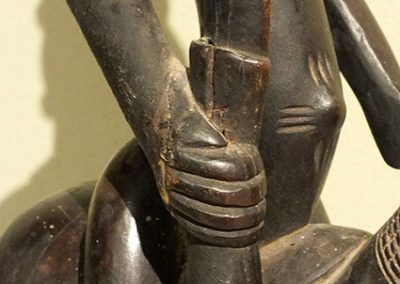 Senufo Equestrian Figure, an elegantly carved wooden equestrian figure with seated rider and stylized horse. The male rider having a small prognathous head with scooped facial plane. His face with ovoid, downturned eyes bisected by a small mouth, He wears a small hat and has a powerful neck. An amulet for protection is worn at his neck. Rounded, strong shoulders curving into the upper arms. Above the elbows, the rider wears carved, biconical armbands. Both elbows bent into the lower arms; right arm extending to his hand carrying a stylized rifle and lower left arm extended and try to attached to the horse’s head. Fine backwardly arched torso with protruding abdomen connecting to short, bent legs with small feet. The horse’s head with full carved face having rounded eyes and open mouth . Overall exceptionally fine dark   brown patina.

“The horse which symbolizes power, is overpowered by the authority of the rider. To increase this power visually and emotionally, to single out the relationship of authority between ruler and ruled, between deity and devotee, the artist is able to deploy his skill to create a sculpture of unexpected, astonishing dimension. The disproportion between the horse, whose size is mercilessly shrunk, and the rider whose body is extremely elongated offers a dramatic yet harmonious sculptural structure… In the late nineteenth century, warriors on horseback were a frequent sight in Senufo villages. Some of these riders were soldiers in the army of Dyula empire-builder Samori Ture, pursuing Senufo captives and destroying their homes and fields. Others were Senufo leaders, defending their villages against the invaders. The memory of these powerful horsemen has left its mark on Senufo art. Ridden by foreign conquerors or local rulers, horses are synonymous with aggression, power, and wealth in Senufo art and culture… Poro, an initiation society that is mandatory for all Senufo men, provides the framework and hierarchy for social, political and religious activities in Senufo villages. Sandogo, the woman’s society found in all Senufo communities, is concerned with maintaining good relationships with the spirit world and ensuring the propriety of marriages in the human one. Images of the horses and riders can be found in both poro’s public art forms and the more private sandogoart forms… Men in their twenties and early thirties who were members of the senior grade, known as tyolobele, comprised the infantry. Their elders who had completed all the initiation phases of poro, served as cavalry. In the Senufo region in the late nineteenth century, horsemen were both defenders and attackers, and the attackers were both Senufo and foreign… As is typical of Senufo wood sculpture, the play of convex and concave curves provides movement and vitality to these images. The riders sit proudly, often with exaggeratedly erect posture and broad curved shoulders. Often the prognathic jaw echoes the forward curve of the torso, adding to the figures assertive expression. The horses themselves often have a swayed back, repeating the curves seen in the riders. The horse’s front legs and rear legs may be fused to create more sturdy plank-like supports for the animal. Riders are shown nude but often wearing the hats and amulets that are associated with the Muslim peoples of the West African savannah, including the Dyula. They carry lances and rifles, which were an important feature of Samori’s army. Saddles are depicted, but reins are not, as they would probably be too fragile to sculpt in wood…The importance of equestrian imagery in Senufo art, reflects respect and desire for power and domination by both victors and victims.” (George Chemeche, The Horse Rider In African Art, London, 2011)