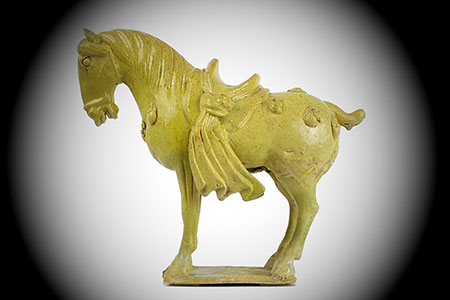 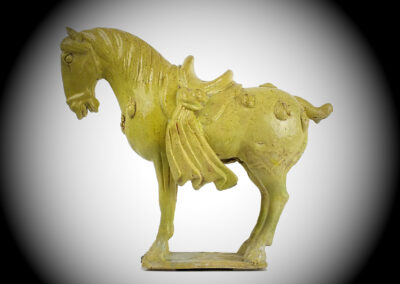 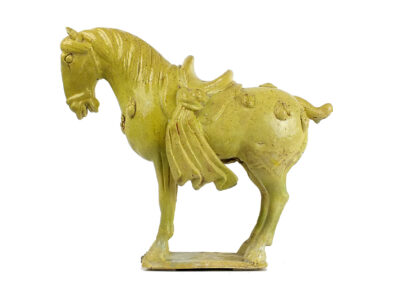 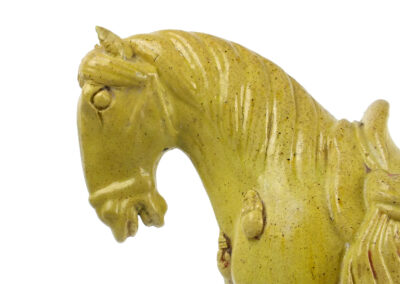 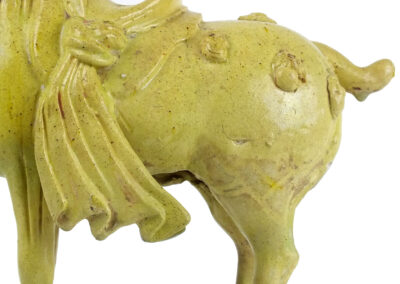 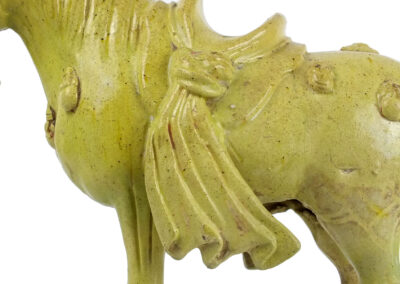 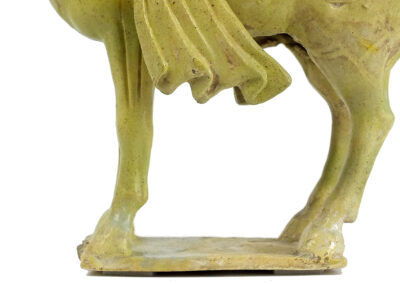 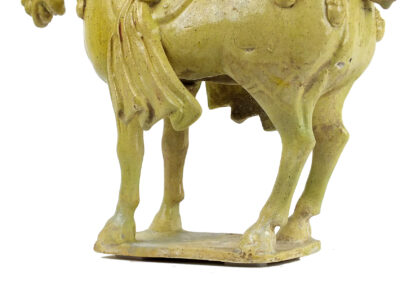 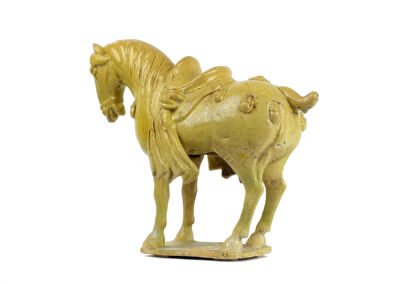 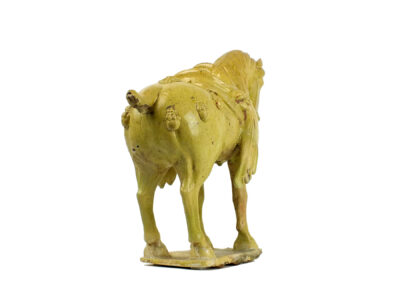 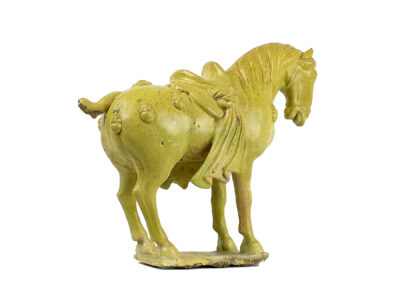 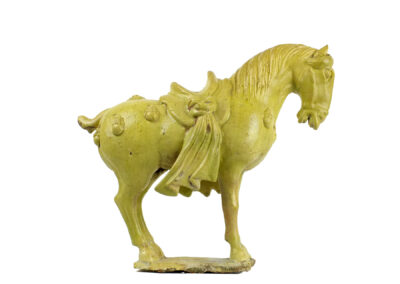 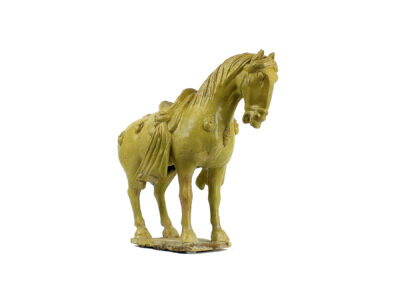 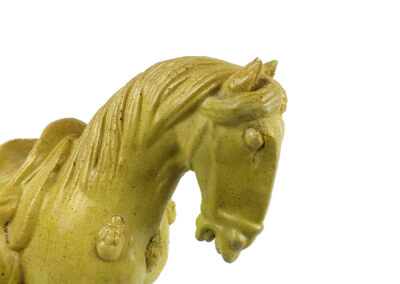 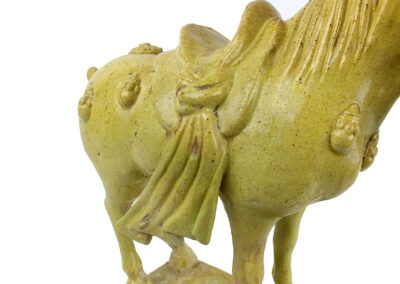 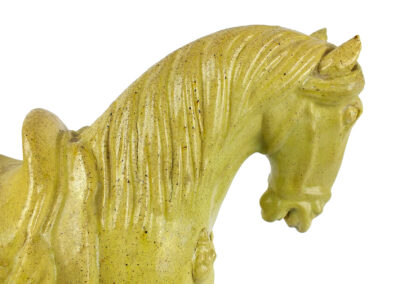 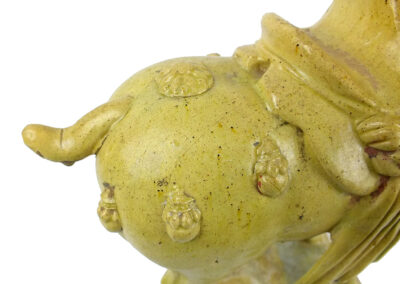 The horse is a masterpiece and very rare regarding its style, details, pigment and period (Sui dynasty). The horse had been molded and modeled from white earthenware (this is the most rare and high quality earthenware used for making pottery figures!) with straw-yellow, lead-fluxed glaze. Christie’s New York had only auctioned a similar Sui horse in 1990’s. Since then no second one has come on the market. This is a once in a life time opportunity to buy such exceptional work of art.

– The results of thermoluminescence tests are consistent with the dating of this object. Sui dynasty (ca. 1410 years old). Sampling in 3 different points – Back horse, Saddle horse, Chin horse. Sample B seems to be restored.

Well modelled standing foursquare on a rectangular base, the slender curved head with crisply flared nostrils and picked ears. The arched neck with a scalloped border to indicate the mane, the trappings including crisply detailed bridle, chest collar applied with florette – molded tufts, and croupier that continues under the tail, the saddle draped with a long-flared cloth carved with fringe.

– A Certificate of Authenticity from Becker Antiques (specialist in Chinese pottery since 1969, Amsterdam) will accompany the item.

– All items legal to buy/sell under The Netherlands covering cultural patrimony, and are guaranteed to be as described or your money back.

Becker Antiques is one of the most leading reputable antique dealers in the Netherlands. Becker Antiques is a name and place that speaks of excellent antiques and art, superb service and worldwide expertise. Founded in 1969 by Jan Simon Becker, Becker Antiques is based in Museum quarter, Amsterdam Old-South (Oud-Zoud), in a magnificent five-floor townhouse build 1891, at a few minutes from “Rijksmuseum” (National Museum of Art), the Van Gogh Museum and the famous “Royal Concertgebouw”.

Becker Antiques main field covers ceramics – pottery funerary figures (dated from the Han through the Ming dynasties), Buddhist sculptures and other Chinese works of art. Our other sections are Asian works of art – concerns objects from Japan and South East Asian countries including bronze, stone and wooden sculptures, Chinese furniture from the Qing Dynasty and of course occasional other items.

For the last 51 years we have been selling antiques to museums, private collectors and dealers all over the world.

The Sui dynasty ([swěi], Chinese: 隋朝; pinyin: Suí cháo) was a short-lived imperial dynasty of China of pivotal significance. The Sui unified the Northern and Southern dynasties and reinstalled the rule of ethnic Han in the entirety of China proper, along with sinicization of former nomadic ethnic minorities (Five Barbarians) within its territory. It was succeeded by the Tang dynasty, which largely inherited its foundation.

Founded by Emperor Wen of Sui, the Sui dynasty capital was Chang’an (which was renamed Daxing, modern Xi’an, Shaanxi) from 581–605 and later Luoyang (605–618). Emperors Wen and his successor Yang undertook various centralized reforms, most notably the equal-field system, intended to reduce economic inequality and improve agricultural productivity; the institution of the Five Departments and Six Board (五省六曹 or 五省六部)system，which is a predecessor of Three Departments and Six Ministries system; and the standardization and re-unification of the coinage. They also spread and encouraged Buddhism throughout the empire. By the middle of the dynasty, the newly unified empire entered a golden age of prosperity with vast agricultural surplus that supported rapid population growth.

A lasting legacy of the Sui dynasty was the Grand Canal.[2] With the eastern capital Luoyang at the center of the network, it linked the west-lying capital Chang’an to the economic and agricultural centers of the east towards Jiangdu (now Yangzhou, Jiangsu) and Yuhang (now Hangzhou, Zhejiang), and to the northern border near modern Beijing. While the pressing initial motives were for shipment of grains to the capital, transporting troops, and military logistics, the reliable inland shipment links would facilitate domestic trade, flow of people and cultural exchange for centuries. Along with the extension of the Great Wall, and the construction of the eastern capital city of Luoyang, these mega projects, led by an efficient centralized bureaucracy, would amass millions of conscripted workers from the large population base, at heavy cost of human lives.

After a series of costly and disastrous military campaigns against Goguryeo, one of the Three Kingdoms of Korea,[3][4][5] ended in defeated by 614, the dynasty disintegrated under a series of popular revolts culminating in the assassination of Emperor Yang by his ministers, Yvwen Huaji in 618. The dynasty, which lasted only thirty-seven years, was undermined by ambitious wars and construction projects, which overstretched its resources. Particularly, under Emperor Yang, heavy taxation and compulsory labor duties would eventually induce widespread revolts and brief civil war following the fall of the dynasty.

The dynasty is often compared to the earlier Qin dynasty for unifying China after prolonged division. Wide-ranging reforms and construction projects were undertaken to consolidate the newly unified state, with long-lasting influences beyond their short dynastic reigns. 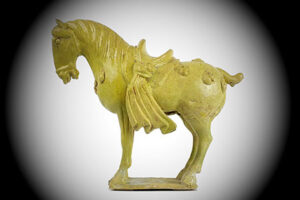 Complete the contact form below to request more information about: Straw-Yellow Glazed Horse