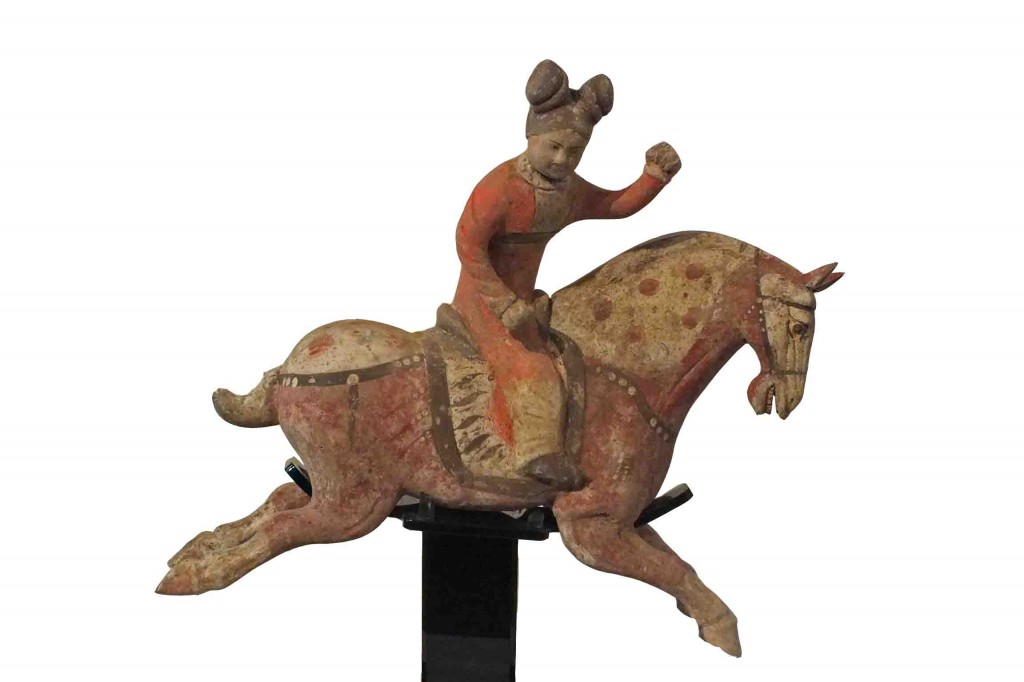 Tang Dynasty Polo Player, the galloping horse covered in a red and white slip, extending all four legs to their fullest in mid air, the female polo – player seated firmly on the saddle with legs stretched forwards above the front legs, her body twisted to the right, her arms raised to swing, dressed in red – white jacket and white trousers, her black hair drawn up into two platted knots, details picked out in red, black and white pigment

The Tang Dynasty was an era of unrivaled wealth and luxury. The country was successfully reunified and the borders were expanded, pushing Chinese influence into new lands. Confucianism became a quasi-religious instrument of the state; yet Buddhism continued to flourish, spreading into Korea and Japan. The arts reached new levels of sophistication. Poetry and literature flourished under the enlightened rulers. The Silk Road brought fortunes into China. Precious treasures were imported on the backs of camels from far away lands and bartered for Chinese silk, medicinal herbs, and pungent spices. Tang China was a multicultural empire where foreign merchants from across Central Asia and the Middle East settled in the urban centers, foremost among them the thriving capital of Changan (modern Xian), a bustling cosmopolitan center of over two million inhabitants. Foreign traders lived next to native artisans and both thrived. New ideas and exotic artistic forms followed alongside. The Tang Dynasty was a cultural renaissance where many of the forms and objects we now associate with China were first created. Moreover, this period represents one of the greatest cultural outpourings in human history.