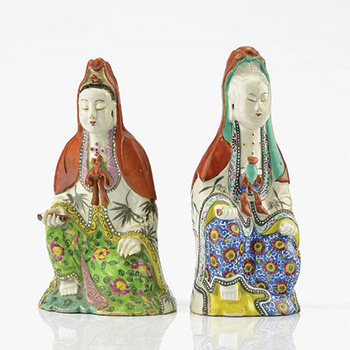 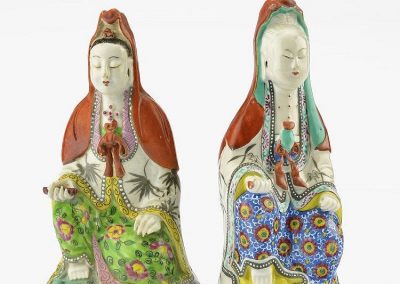 Meaning “the pink family”. Famille-rose enamels were first introduced around the end of the 1720’s for use on porcelain. The majority of the enamels is opaque or semi-opaque and does not flow when fired. The palette takes its name from a rose-colored enamel which makes up a characteristic color in the palette. Other significant colors in this palette are opaque yellow and opaque white.

The palette seems to have been developed with influence from European taste and demand and with technology imported via Jesuits working within the Imperial palace in Beijing.

In the last years of the Kangxi reign, foreign rouge-red oxide based enamels was used to color flower petals. This started a trend toward a new palette (known in the West as famille rose) during the succeeding Yongzheng and Qianlong reigns. In Europe and foremost France, the emerging rococo fashion, being an important export market also called for softer colors in the decorations.

The famille rose is characterized by that an opaque glassy white (bo li bai) enamel (lead arsenate) is employed as the base for coloring garments or flower petals and that colored enamels are either mixed with white or brushed on top of it to created variations in tone. Typically the earlier enamels in this palette was applied with glue as its base which helped with building thick layers of enamels, while later versions are applied with the use of rue oil as a medium, which gives thinner layers.

Compared with the transparent famille verte enamels of the previous Kangxi period (kangxi wucai) this new opaque palette could be fired at a lower temperature and had a wider color range. It also appeared softer and gentler, hence its other name ruan cai (soft colors).

During the Yongzheng reign, famille rose wares reached their zenith, replacing the famille verte of the Kangxi reign and becoming the dominate palette in overglaze decoration.

During the Qianlong reign, new techniques continued to develop. Typically the details of the decoration was filled in within outlines rather than ‘boneless’. More colors began to appear as the background. The decoration was painted not only on a white transparent porcelain glaze but also on colored backgrounds such as yellow, blue, pink, coral red, light green, ‘cafe au lait’ and (Batavia) brown, etc. The designs also grew increasingly complex.

In the Yongzheng reign it was known as ruancai (soft colors). In the Qianlong reign it acquired the name yangcai (foreign colors), possible since this new decorative technique used many imported materials, and its method of mixing pigments was also ‘foreign’ however, it could also refer to the popularity abroad these gaudily decorated wares had with the export markets, which by and by overtook the market for the plain blue and white wares.

Fencai (powder colors) is a 19th C term which has been further defined to being ‘famille rose decor against a white ground’ whereas ‘falangcai’ has become the name for ‘famille rose on a colored ground’. Most likely ‘falang’ is a Chinese pronunciation of ‘foreign’ while ‘cai’ just means ‘enamels’. 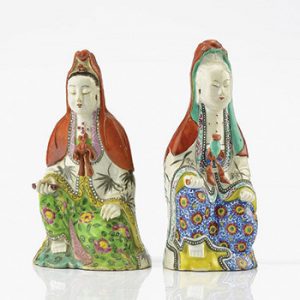