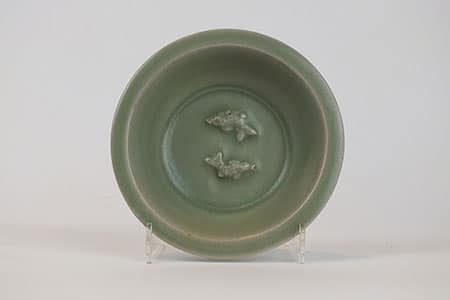 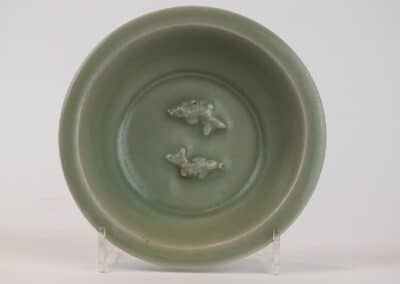 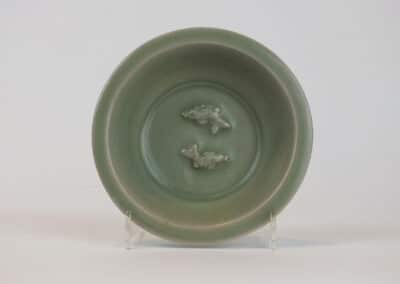 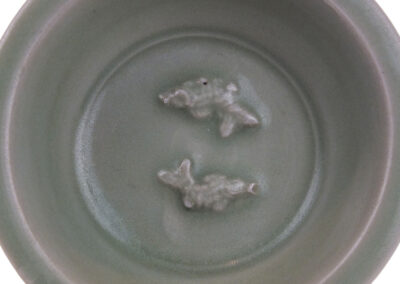 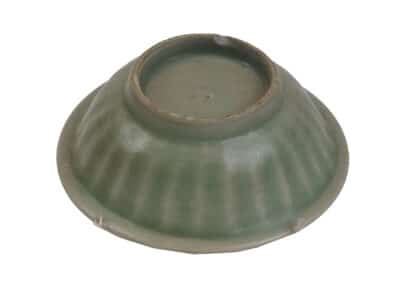 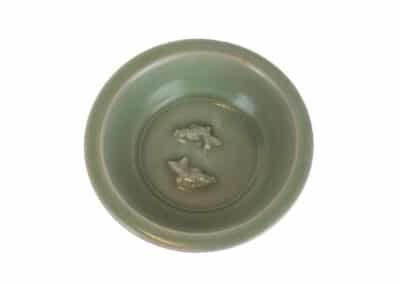 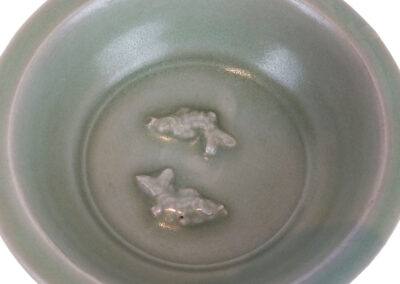 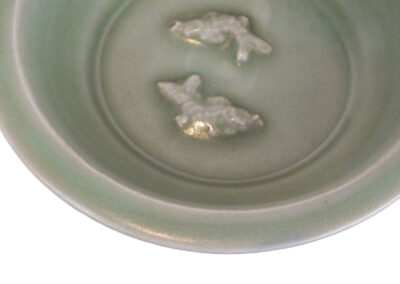 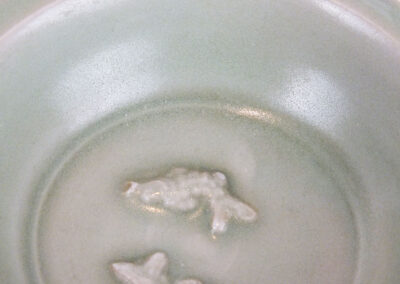 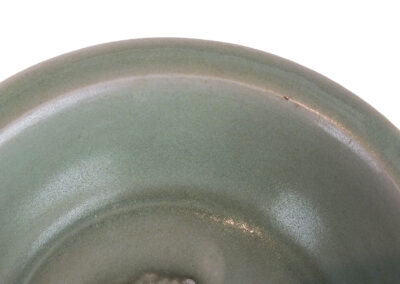 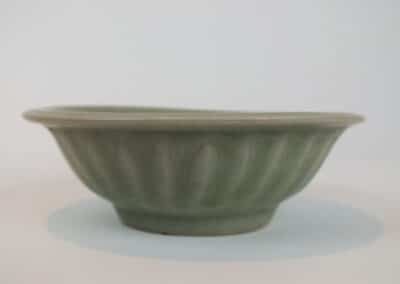 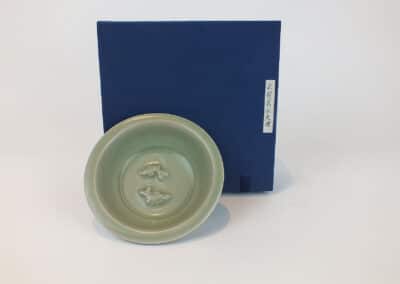 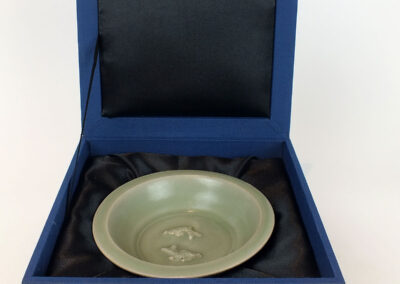 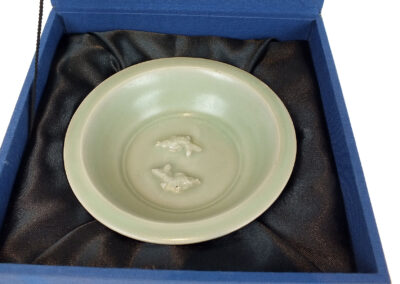 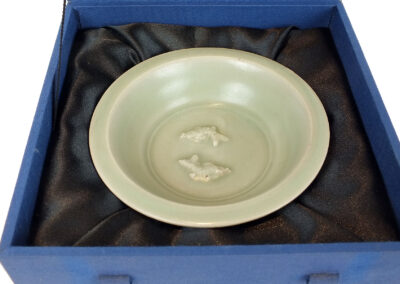 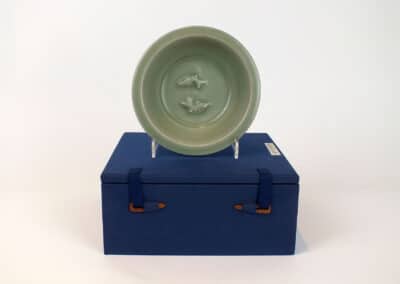 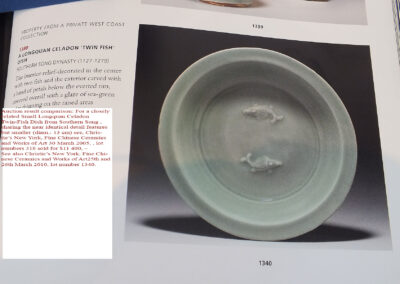 Small Longquan Celadon Twin-Fish Dish, the exterior of the deep rounded sides carved with a band of petals rising from the foot to the flat everted rim, and the interior decorated in the centre with two moulded fish, covered overall with a glazed of sea-green tone.

Close up on Double Happiness (Cui Bai). It was painted by Cui Bai, active during the reign of Shenzong. National Palace Museum

Cats in the Garden, by Mao Yi, 12th century.

The visual arts during the Song dynasty were heightened by new developments such as advances in landscape and portrait painting. The gentry elite engaged in the arts as accepted pastimes of the cultured scholar-official, including painting, composing poetry, and writing calligraphy.[121] The poet and statesman Su Shi and his associate Mi Fu (1051–1107) enjoyed antiquarian affairs, often borrowing or buying art pieces to study and copy.[27] Poetry and literature profited from the rising popularity and development of the ci poetry form. Enormous encyclopedic volumes were compiled, such as works of historiography and dozens of treatises on technical subjects. This included the universal history text of the Zizhi Tongjian, compiled into 1000 volumes of 9.4 million written Chinese characters. The genre of Chinese travel literature also became popular with the writings of the geographer Fan Chengda (1126–1193) and Su Shi, the latter of whom wrote the ‘daytrip essay’ known as Record of Stone Bell Mountain that used persuasive writing to argue for a philosophical point.[122] Although an early form of the local geographic gazetteer existed in China since the 1st century, the matured form known as “treatise on a place”, or fangzhi, replaced the old “map guide”, or transl. zho – transl. tujing, during the Song dynasty.

The imperial courts of the emperor’s palace were filled with his entourage of court painters, calligraphers, poets, and storytellers. Emperor Huizong was the eighth emperor of the Song dynasty and he was a renowned artist as well as a patron of the art and the catalogue of his collection listed over 6,000 known paintings.[124] A prime example of a highly venerated court painter was Zhang Zeduan (1085–1145) who painted an enormous panoramic painting, Along the River During the Qingming Festival. Emperor Gaozong of Song initiated a massive art project during his reign, known as the Eighteen Songs of a Nomad Flute from the life story of Cai Wenji (b. 177). This art project was a diplomatic gesture to the Jin dynasty while he negotiated for the release of his mother from Jurchen captivity in the north.[125]

Four lines of vertically oriented Chinese characters. The two on the left are formed from a continuous line, the calligraphy equivalent of cursive. The two on the right use a more traditional multiple stroke writing style.

A portrait of an older, balding man in a half pale green and half sky blue robe. He is sitting on an armchair holding a thin wooden stick, possibally a folded up fan.

In philosophy, Chinese Buddhism had waned in influence but it retained its hold on the arts and on the charities of monasteries. Buddhism had a profound influence upon the budding movement of Neo-Confucianism, led by Cheng Yi (1033–1107) and Zhu Xi (1130–1200).[126] Mahayana Buddhism influenced Fan Zhongyan and Wang Anshi through its concept of ethical universalism,[127] while Buddhist metaphysics deeply affected the pre–Neo-Confucian doctrine of Cheng Yi.[126] The philosophical work of Cheng Yi in turn influenced Zhu Xi. Although his writings were not accepted by his contemporary peers, Zhu’s commentary and emphasis upon the Confucian classics of the Four Books as an introductory corpus to Confucian learning formed the basis of the Neo-Confucian doctrine. By the year 1241, under the sponsorship of Emperor Lizong, Zhu Xi’s Four Books and his commentary on them became standard requirements of study for students attempting to pass the civil service examinations.[128] The East Asian countries of Japan and Korea also adopted Zhu Xi’s teaching, known as the Shushigaku (朱子學, School of Zhu Xi) of Japan, and in Korea the Jujahak (주자학). Buddhism’s continuing influence can be seen in painted artwork such as Lin Tinggui’s Luohan Laundering. However, the ideology was highly criticized and even scorned by some. The statesman and historian Ouyang Xiu (1007–1072) called the religion a “curse” that could only be remedied by uprooting it from Chinese culture and replacing it with Confucian discourse.[129] A true revival of Buddhism in Chinese society would not occur until the Mongol rule of the Yuan dynasty, with Kublai Khan’s sponsorship of Tibetan Buddhism and Drogön Chögyal Phagpa as the leading lama. The Christian sect of Nestorianism, which had entered China in the Tang era, would also be revived in China under Mongol rule. 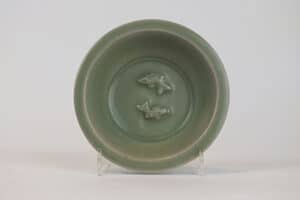